We're pleased to announce that Jamieson Law have selected us as their charity partner for 2022 and beyond.

Jamieson Law is a business law firm, who have a new mission – to raise awareness far and wide that things need to change within the world of bowel cancer in regard to missed and delayed diagnosis.

Some of the Jamieson Law team members have unfortunately been directly impacted by bowel cancer, including friends and family who have lost their lives to the disease.

Babs Jamieson, founder and CEO of Jamieson Law is incredibly passionate about advocating for change: "Sit up and listen. Hear what we are saying. Enough is enough – early diagnosis of bowel cancer can and should be a priority to avoid us losing more lives too soon."

In 2021, Jamieson Law had the idea to start up a fundraiser in support of us, to raise awareness and honour the memory of the loved ones they have lost. This resulted in the creation of 'Count Your Miles for Cancer', where the Jamieson Law team and friends ran as many miles as physically possible in a four day period. A total of £3,280 was raised and over 300 miles ran.

Luke Squires, Director of Fundraising at Bowel Cancer UK, said: "We're so grateful that Jamieson Law have decided to partner with us.

"Bowel cancer is the UK's second biggest cancer killer, so as well as Jamieson Law doing a fantastic job raising vital funds for research and lifesaving work, a partnership gives us a fantastic opportunity to increase awareness of bowel cancer."

Read more about our corporate partnerships 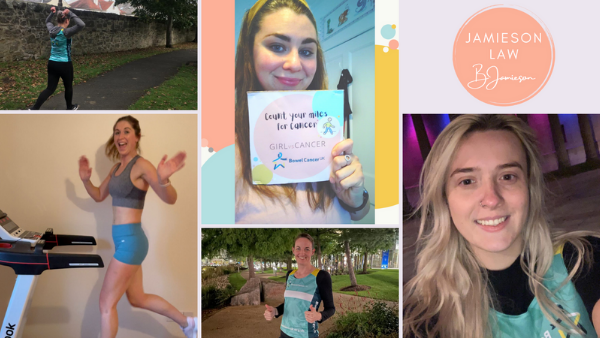