Why we joined Chat Together

Chat Together is a welcoming place to talk to others with bowel cancer and meet new people. It's a chance to share experiences in a friendly, supportive and informal environment. We spoke to a few people about why they signed up to Chat Together, the friends they have made and the impact it has had on them.

I was diagnosed with stage 3 bowel cancer in July 2017, but following surgery and chemotherapy, I have been clear since April 2018.

I volunteer for the charity and, having attended one of their events in the past, I was particularly interested in Chat Together. I feel many men may be embarrassed to speak openly about their diagnosis but my hope is that in doing this it might encourage other men to take part.

It's a useful place for people affected by bowel cancer to discuss and share their experiences, along with the ups and downs, in a confidential setting and in a different way to the forum – which I also use a lot.

I was diagnosed at the age of 43 as having stage 3 bowel cancer. It took a while to get diagnosed due to my age and not being in the 'age bracket' to even suspect bowel cancer. I underwent right hemi-colectomy surgery in July 2018 followed by six months of chemotherapy. I'm in my third year of having no evidence of disease, but I do have six monthly surveillance blood tests.

When I first saw an advert for Chat Together I thought it would be a good space to talk to others face to face about how I felt about my situation. All the posters in the treatment areas talked about breast cancer or prostate cancer, so it was great to see something specifically about bowel cancer, as I had felt so isolated.

The Chat together meetings have given me a place to talk about how I feel with people who have had the same feelings and similar experience – but not only just about cancer, we have spoken about current affairs and what we have been doing over the week.

I am hoping that there will be some ongoing virtual meet ups from my group or, who knows, we may even get to meet in the real world one day!

I was diagnosed with stage 3 rectal cancer in September 2014 and underwent chemotherapy, radiotherapy and anterior resection in April 2015 followed by further chemotherapy. I've since had more surgery on my liver and radiofrequency ablation to lesions on my lungs.

I was invited to join a Chat Together group and thought I could add something to the meetings, and get lots out of them too. The group has chatted since May 2020. It's been so familiar a call each week. I've enjoyed the informality, the support and understanding, the friendliness and the banter. We're all still together.

Feeling inspired? Join a Chat Together group – a welcoming place to talk to others with bowel cancer and to meet new people. 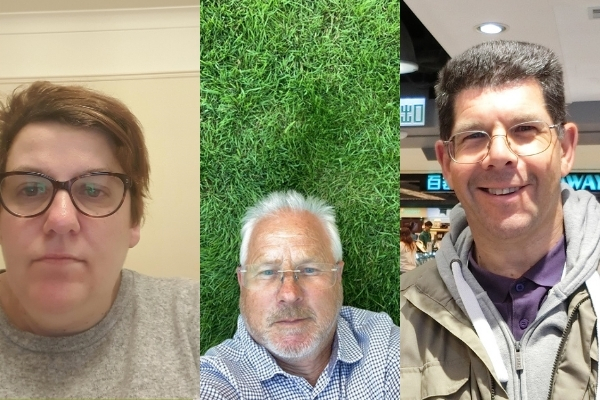 Pictured above are some of our Chat Together participants. From left to right: Clare Harris, Tony Miles, Stuart Christopher