Frances' Walk Together to raise awareness of bowel cancer

Frances Abel has raised nearly £600 with her Walk Together event this September after being diagnosed with bowel cancer two years ago. She says:

I'm 76 years of age. My bowel cancer diagnosis comes more of a shock to me now, two years on, than it did at the very beginning. I wasn't shocked then, when after my colonoscopy the radiographer told me he had found an abnormality. He had seen something in the sigmoid colon and told me a consultant would be in touch to explain more.

Previous to my diagnosis my bowel system has never been the best. I could go for four to five days without a bowel movement, then have terrific sharp pains in the pit of my stomach. This would result in a thunderous bout of diarrhoea, a very uncomfortable situation which I came to accept over the years.

It didn't stop me doing all the things I loved, mostly weekly sessions at my local sports centre, meeting up with friends for coffee, running and a few games of short tennis. My tummy was always a little difficult through these times, but I was good at keeping my problems to a minimum, only my close friends and family knew my worries.

I did visit doctors over this period and was diagnosed with IBS. I was given different forms of medication to help solve my problems, but nothing helped and I had no great change. It was a slow progression of uncomfortable times and embarrassing times. Sometimes a meal or enjoying a drink seemed to bring on the situation, with an uncomfortable time in the loo. It was a constant worry. I knew something wasn't right and I was beginning to wonder about cancer but never fully believed it.

In 2016 I had a colonoscopy that thankfully had a clear result, which was a relief. Strangely though, things still carried on. In September 2018 my husband Bob and I went to London for the weekend to see a show and do some sightseeing. We had lunch near London Bridge and while returning to our hotel I had the most awful pains and had to leave my husband to rush back to the restaurant. I was anxious hoping to find a vacant loo, which thankfully I did but it was a stressful time.

A day or two after returning from London, a 3cm clot of blood fell into the loo, which was a shock for me. I recovered it, placed it in a small sealed pot and organised a doctors appointment that day. After seeing the clot, the doctor put me on a two week fast track cancer referral. I was so grateful for the quick response he had.

An appointment with a consultant a few weeks later resulted in me being told there was good and bad news: the bad news was that I had cancer, the good news was we could cut it out. I asked the normal things which never seem to be the right things, I just had to accept this problem I had. Soon we left for home which meant long explanations to family and friends.

In October 2018 I went into hospital. My family and friends wished me well and I just wanted to get on with it. My operation was the next day, which was successful. When I woke up I had a catheter, feed tube in my nose, a very sore tummy, but to my horror also a stoma. It was a difficult ten days with painful daily injections, I was sick all the time, had little sleep, and worse news that my stoma wasn't working properly.

I had another operation the next day because my colon had a blockage, plus more examinations and CT scans. My operation done and onto another road to recovery which was an uncomfortable time.

Slowly I began to recover. I was able to eat a little more such as jelly and ice cream, yogurt and eventually eggs nearer the end of my stay. The staff were brilliant, so kind and caring and I couldn't have been looked after any better – thank you to them all.

The time came to go home. In the following months I was so lucky to have all my family looking after me and friends sending flowers and texts and visiting when they could. My weight was not the best, but over the next year it improved. My stoma was a big change in my life, but I've not let it stop me from doing as much as I can and slowly returning to my exercise classes was the best thing. I will have a reversal at some point, but due to COVID-19 this has temporarily been delayed.

I walk daily and feel healthy again, so I was happy to join Walk Together this year to highlight how bowel cancer affects so many lives and can be a deadly disease.

I completed 6.7 miles on Saturday 5 September and raised nearly £600. Thank you to all my lovely family and friends who donated for this great cause.

Walk Together is a sponsored five mile walk to show our support for those undergoing treatment, to remember loved ones and help stop people dying of bowel cancer.

On Saturday 12 June 2021 we're asking you to join us and walk five miles in your own time, at your own pace, in your local area, with your household or within small socially distanced groups. By walking on this date we will be together, across the country, completing our five miles on the same day.

However, if you can't make this date then you can still walk anytime throughout June to suit you. 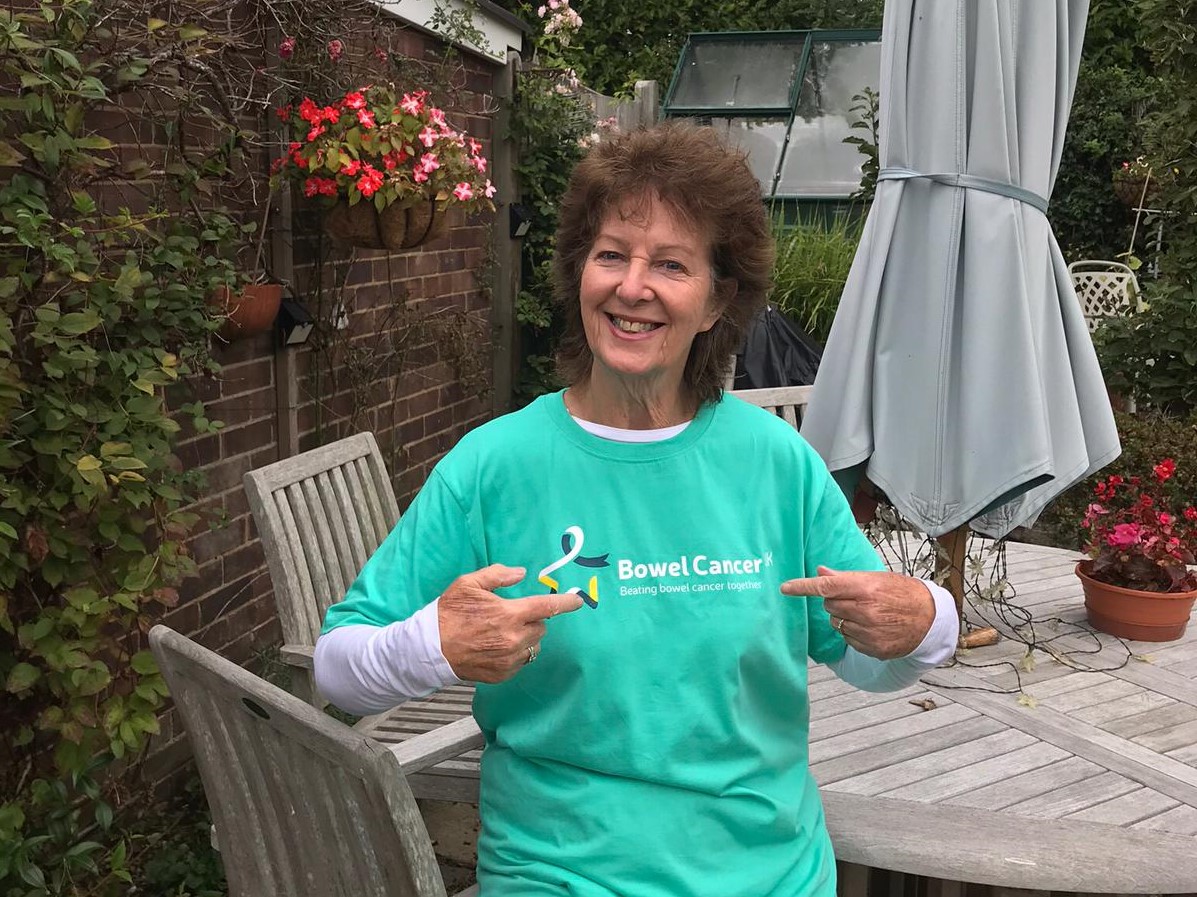 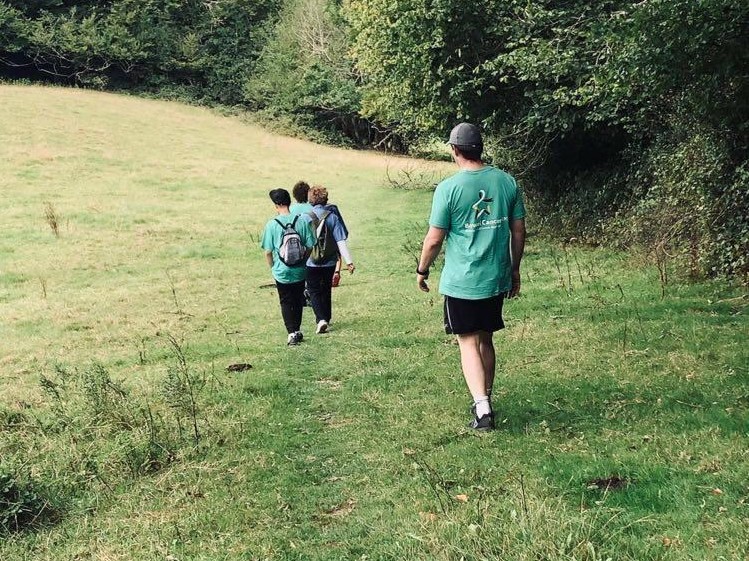 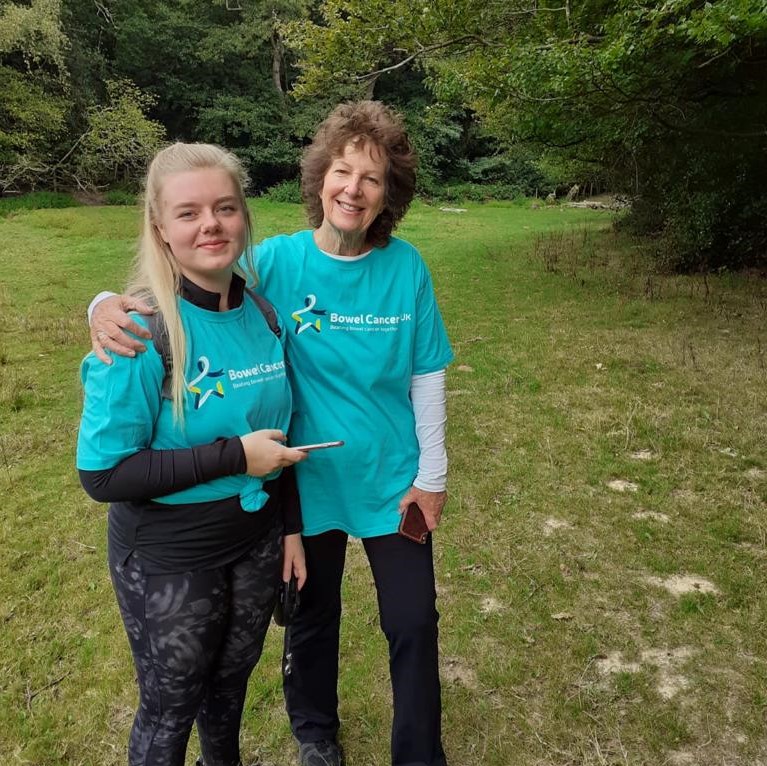