I was 39 when I was diagnosed with bowel cancer in December 2017.

Everything was going well in my life, I was in a loving relationship with my best friend, we had a 17 month old daughter, Juliette, and I was six months into a new job for a great company.

The April/May before then, I had started having cramps in my lower abdomen. They were not too bad and I could still go about my day but they were not going away. I attributed this to stress: I was going to change jobs, I was getting to grips with being a mum and had just got back to work after maternity leave. So I was just waiting for it to pass.

In the summer we went to visit my parents in France and they told me one of our good friends had just been diagnosed with bowel cancer, at 49. I can't explain why, if it was a sort of sixth sense or that deep down I knew these cramps were more serious than just stress, but I remember my heart started racing and I went into a panic. I didn't show it to anyone but I started googling my symptoms, and of course read a lot of horror stories which didn't help.

Back home I also noticed on one or two occasion some blood after I had been to the toilet so I eventually went to the GP. I told him about my fears, he examined me and ordered a blood test. He then concluded it was severe constipation. My blood test was normal but an inflammation marker was high so we repeated it and it had gone back to normal. I took some medication to help with the constipation but a month later the cramps were still there. And one morning fooling around with my daughter, she jumped on my belly and I felt a sharp pain and a lump on my left side. I went back to the GP. I saw a lady who felt the lump as well but went on to explain that it was where stools accumulated and she wanted to see me a week later to check it was still there.

I went back and the lump had disappeared... but the cramps were still there and I was starting to despair as although they were still mild, they were very much on my mind.

The GP sent me for an ultrasound to check any possible gynaecological issue. She also mentioned it could be IBS and gave me some diet advice.

But I was not convinced. We were in late November now and I still didn't have an answer.

So I decided to refer myself to a specialist, a gastroenterologist, privately. I got an appointment for a week later. Then the cramps started to ease a little and I felt a bit foolish, paying all that money for maybe nothing. I nearly cancelled the appointment but my partner Richard convinced me to go (and probably saved my life).

After I described my symptoms the specialist said to me "let's do a colonoscopy for peace of mind, we probably won't find anything serious but it will help us understand what's happening to you."

Early December I went for a colonoscopy (still privately). I was asleep during the procedure. When I came round, my doctor had had to leave for an emergency at the local hospital and I only saw the nurse. She told me they had found a narrowing in my bowel and were advising me to have a CT scan to check what it was. I had the option to have it there and then and pay more or wait to get an appointment with the NHS. I chose to have it done straight away – I was somehow relieved they had found something (it wasn't just my imagination) but didn't think it could be anything too serious and the C word didn't cross my mind.

The following day, on 13 December 2017, I had an appointment with the gastroenterologist who sat me down and said "I'm afraid there is a tumour down there."

Juliette was running around in his office playing with his medical instruments. Richard and I looked at each other in disbelief, but the doctor quickly added "but it has not spread, I had our radiographer check your CT scan and it's still localised... we will sort you out." He had already sorted an appointment with a surgeon, the best in our area and it all went very quickly.

I had surgery on the NHS early January, they managed to remove all the tumour and it looked as if there was nothing left behind, it was in my sigmoidal colon. I didn't need a stoma, I recovered well. After the surgery I was kept in hospital for a little longer than planned as my bowel didn't seem to be want to produce a stool, but it finally came and I had never been so happy to have a poo in my life...

After that, the results from the pathology examination of the tumour came back and I was told I needed chemotherapy as they had found some microvascular invasion around the tumour. It was a bit of a blow at first but I accepted it as it was put to me as an "insurance policy" to minimise the risk of recurrence.

When you are in the throws of it all, it all goes quickly and you're focused on going through it and leaving that bad experience behind. That's how it felt and I was lucky to be supported by family and friends. My parents came over after my surgery and stayed a little, they also came back while I was on chemo. They never showed it but I know now it was very difficult for them.

I remember the kindness of the chemo nurses, the encounters with fellow patients and a lot of clichés I had in my head were actually proven wrong: there were a lot of people there who were young, didn't look sick, you wouldn't have known if you had met them in the street.

I continued working and only a few people at work knew. It helped me feeling alive.

While I was going through all this, I found out that one of my cousins in France had been diagnosed with bowel cancer too, she was 45. And then my next door neighbour and very good friend was diagnosed too with the same cancer, he was 43. He had decided to go to the GP after what had happened to me.

It was so surreal, all four of us in our 40s diagnosed with bowel cancer within just a few months. I still can't process that very well.

Thankfully we're all still here, although my friend and cousin in France are unfortunately going through recurrence, but we are confident they are in good hands and will get through it.

I finished chemo, had the all clear, booked a holiday to Mauritius with just Richard and Juliette, and Richard proposed... it was all great and I was very happy.

However, psychologically I wasn't dealing with the cancer experience very well. In hindsight, the hardest part for me was the aftermath – I was constantly looking for something wrong with me or my family. I was on edge all the time.

I found a support group at a Maggie's centre led by a psychologist specifically for post-treatment patients. He told us how it was normal to feel that way and we had a six week course to help deal with this anxiety. I met four other ladies in that group who had had different cancers and we bonded instantly. We have a WhatsApp group called the musketeers. It has helped a lot.

It also helped when my mum got diagnosed with lung cancer. She was thankfully diagnosed early and has had successful surgery and chemotherapy. She is now all clear too and on surveillance.

Today I feel better for all this. I still have the odd moment of anxiety, especially around scan time, but I know better how to deal with it.

We have moved to a new house and Juliette is happy and healthy. I try to enjoy the little joys of life and find the treasures in the darkness as a good friend would say.

This June I am taking part in Step up for 30 as a little contribution to help raise awareness of bowel cancer, especially in young people (yes 40 is the new 20 lol), as it seems it is very often overlooked and diagnostics can be delayed. If found early this is a curable cancer and it would help save lives!

I am not an exercise junkie but I am planning to use the wealth of online classes made available during this pandemic we are going through.

My advice to anyone in doubt about symptoms is listen to yourself, to your body and your gut feeling (pun intended). Don't put it off, it could be nothing but seeing someone about it could save your life.

Step up for 30 with us in April as part of Bowel Cancer Awareness Month. It's really simple, just get active every day and ask people to sponsor you. 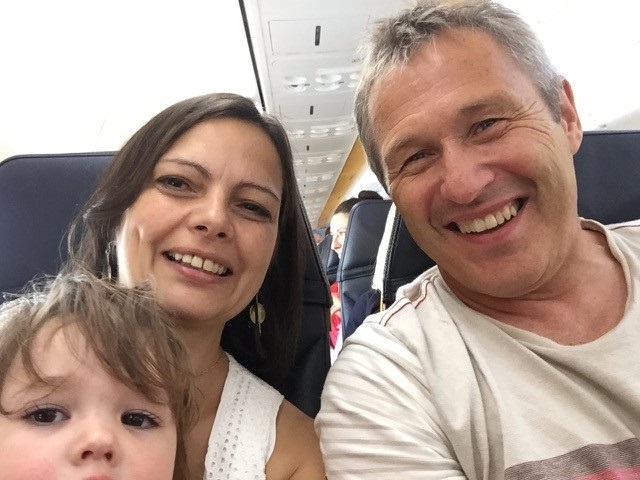