I was 28 when I was diagnosed with bowel cancer in April 2017, which has also spread to my liver meaning I am now at stage 4.

My symptoms began during Christmas time 2016. I was in extreme pain and experiencing fatigue, nausea, vomiting and diarrhoea, bloating of the tummy, loss of appetite and weight loss. I went to the doctors about seven times because of this and the pain I was experiencing. I didn’t know my symptoms could have been bowel cancer and my doctor did not advise this either. I had no blood in my poo until just before diagnosis and my cancer blood test came back negative. I was told I had acid reflux, had scans for gall stones and then was rushed to A&E from a GP appointment with suspected appendicitis.

I was finally referred to a consultant who discovered I was anaemic and tested me for coeliac disease, which I tested negative for. Three months passed and symptoms continued. It was affecting my job and home life. I was then rushed to A&E when the pain got too much to then be discharged with pain killers, an appointment for a colonoscopy and to do a stool sample. I drank the MoviPrep in order to prepare my body for the colonoscopy in hospital only to be sick again and the procedure had to be cancelled. My stool sample came back with inflammation indicators so I was referred to have an ultra sound, where the doctor then fell quiet and rushed me for a CT scan. 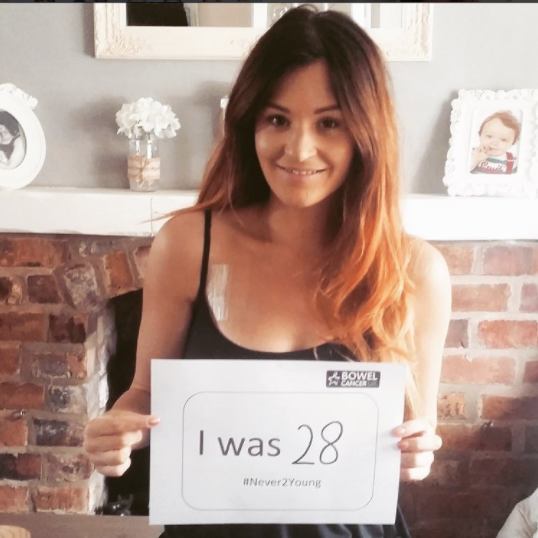 I went home to then get a call saying I had to come back in to hospital as they had found an obstruction in my lower bowel. I was admittedand referred to the surgical team. I was then prepped again for a colonoscopy. When I was I was undergoing this I remember seeing a big bleeding lump, then there was panic in the room and lots of biopsies were taken. The next day I got the devastating news that I had a tumour in my bowel and it had spread to my liver and I was to undergo a right hemicolectomy the week after. In my operation my amazing surgeon Mr Khan (from Macclesfield Hospital) noticed a few of my lymph nodes didn’t look normal so he took 31 out, which later revealed the cancer had spread again as 14 of them came back cancerous.

I’m recovering now and had my PET scan which has revealed I have no bowel cancer left and none of my lymph nodes are cancerous. It also showed the cancer hasn’t spread anymore. I’m about to undergo six months of chemotherapy to try and contain and shrink the liver 'seedlings' in order for me to be able to have an operation to remove them totally. I have not received any private health care so far.

I’m hoping my journey is a positive one as I have a three year old son. I’m not married but have a long term partner and would love to share the same last name as my partner and my son. I can’t work currently and look after my son now, but this experience has brought my family and friends closer together.

I can’t work currently and look after my son now, but this experience has brought my family and friends closer together.