Steve was 60 when he was diagnosed with bowel cancer

I am a happy, healthy, semi-retired rugby fanatic, slightly overweight, living a near perfect life. I was aware of the symptoms of bowel cancer but as far as I was concerned I did not think I had a problem. I had experienced slight traces of blood after going to the toilet but I did suffer from haemorrhoids, which I had discussed with my GP and was happy with his diagnosis.

Soon after my birthday, the NHS bowel screening test dropped through my letter box. I read the information regarding the programme and set the card aside, not with the intention of ignoring it but waiting for that right moment when I could provide three samples and send it off. A couple of weeks later I completed the samples and popped the card in the post.

Within days of sending off my samples I received a letter informing me that my test was abnormal and that I needed a colonoscopy. It was during this investigation that the cancer was detected and I experienced that awful feeling of dread. I was, however, determined that whatever the cancer would throw at me I would remain positive and respond to the advice given to me.

My bowel cancer was in the early stages but I do not consider that I was lucky: the screening programme gave me the best chance of recovery. Bowel cancer is treatable if detected early, and it disappoints me to know that only just over 50% of people return their screening kit. In my mind that means nearly half are playing ‘Russian roulette’ with cancer.

It is now four years since my cancer was detected and life is good. I was so pleased to hear that the screening age is being reduced to 55. Early detection means that cancer can be treated successfully and patients can go on to live a relatively normal life. People say I was lucky, but I believe I created that luck by taking part in the programme. It certainly gave me a chance to overcome bowel cancer and to enjoy life as I do now”

Why is screening so important?

Bowel cancer is the UK’s second biggest cancer killer but it is treatable and curable especially if diagnosed early. Nearly everyone diagnosed at the earliest stage will survive bowel cancer however, this drops significantly as the disease develops. Taking part in bowel cancer screening is the best way to get diagnosed early and early diagnosis saves lives. 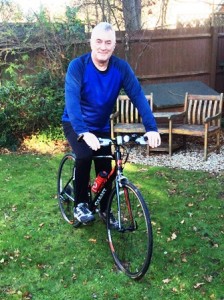