My partner of nine years, Amie who is 31 years old was diagnosed with stage four bowel cancer in May 2016; she was seven months pregnant with our first child.

For several years Amie had suffered from constipation and anaemia but her GP just prescribed her iron tablets and laxatives. It never crossed our minds it was anything more serious, especially bowel cancer as she’s so young. It was only when she fell pregnant she had severe pain in her pelvis however the GP put it down to pelvic girdle which is common in pregnancy.

During the pregnancy she bled twice, but as it wasn’t in her poo or from her bottom, we didn’t suspect bowel cancer. When she bled the first time we saw a consultant who performed a speculum examination but was sent home as the bleeding was likely to be old blood. Two weeks later Amie had a further bleed and had a high temperature so again we went to the delivery suite and saw a senior registrar. He again did a speculum examination and immediately saw a large mass in the cervix, he took biopsies and admitted Amie as he was concerned the mass was infected and causing sepsis.

At this point it was thought Amie had cervical cancer, it was only when they performed a MRI scan that the true nature of the tumour was discovered. She did eventually have a colonoscopy but they were reluctant to do further investigation while Amie was pregnant.

She was diagnosed with stage four bowel cancer, it spread into her cervix and lymph nodes.  Amie couldn’t have chemotherapy while pregnant and so she had an early caesarean, but it meant that Edith was born seven weeks too soon.

However, the chemotherapy had no effect and so she’s been moved 30 miles away to The Christie Hospital to undergo chemo-radiotherapy to shrink the tumour so can have surgery. This will hopefully cure her so we can spend many happy years together as a family. 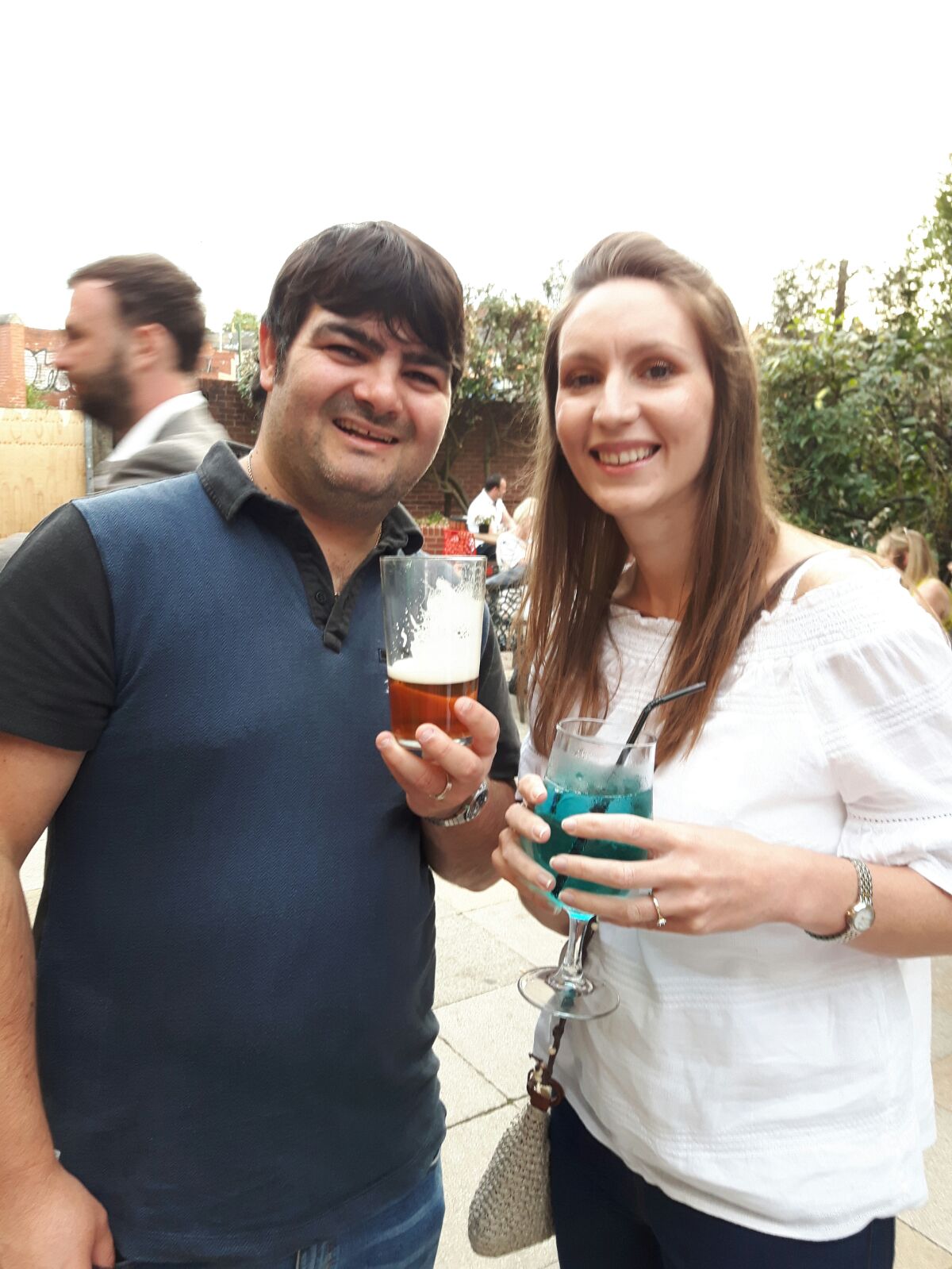 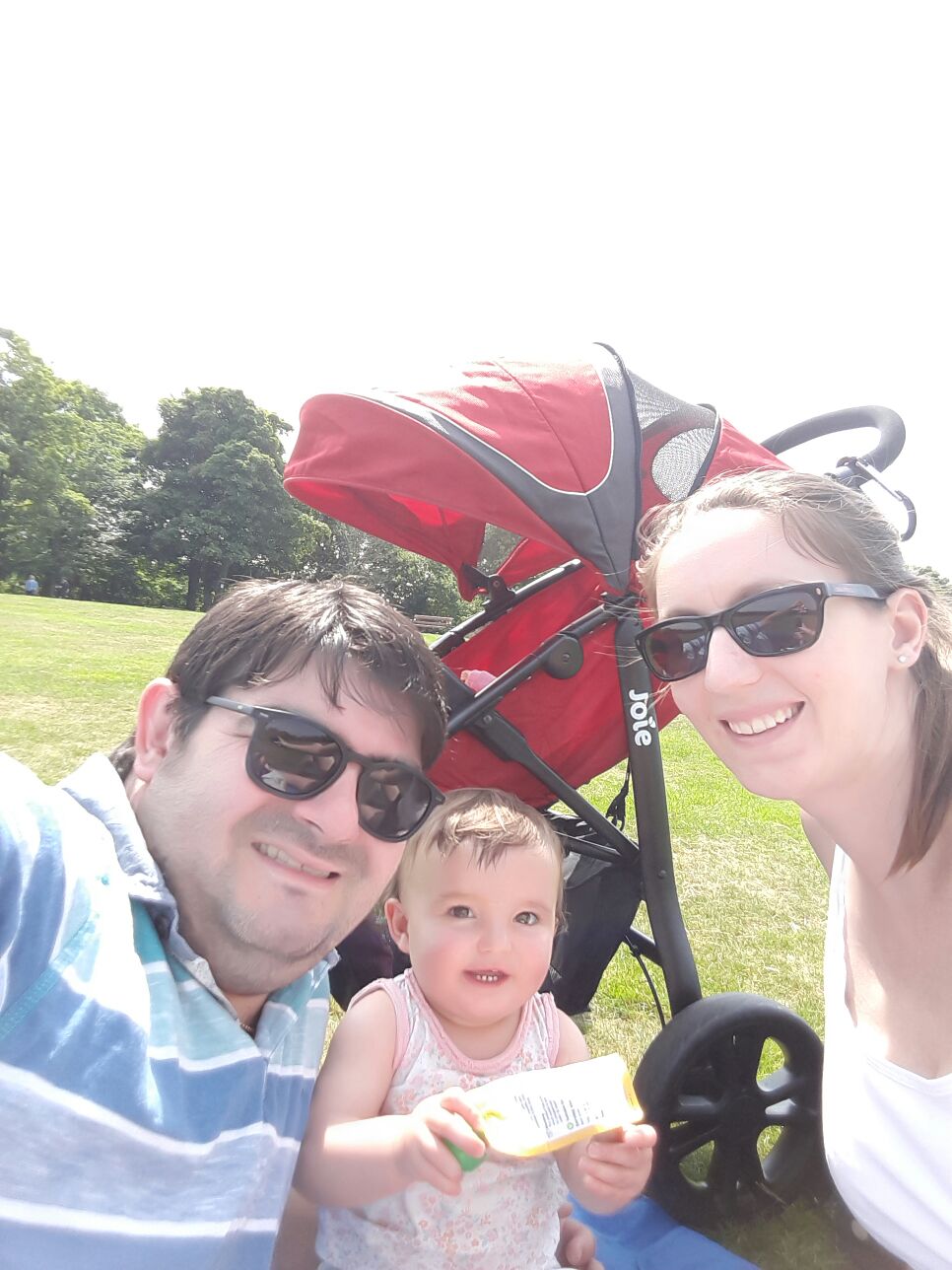 To show my appreciation for funding in bowel cancer research, I took part in Bowel Cancer UK’s Decembeard and grew a beard in December raising £1,150 for the charity.

The scans from the chemo-radiotherapy had shown significant shrinkage however further investigation showed that there was a small amount of active cancer cells left, so the surgeon decided to proceed with surgery to remove what remained.

The surgery happened in March and in June we were informed of the pathology results that showed that they had performed a R0 resection and no tumour was now present. They also stated that the tumour was localised. This means that pending future scans Amie is now cancer free and has recovered from stage 4 bowel cancer, which is amazing news and we feel incredibly lucky that we had treatment under some of the best doctors and surgeons in the country.

Earlier this year I proposed to Amie, and we’re very excited of our upcoming wedding.

Update in February 2018: It is now almost a year since Amie's surgery to remove the tumour and recent scans have come back all clear so she is still cancer free. We got married in October 2017, which was an amazing way of bringing our cancer journey to an end. We are now getting our lives back to normal, although Amie still has pain from the surgery and has been unable to return to work, we now look to the future with anticipation and excitement instead of worry and stress.

But with fundraising there is hope

Feeling inspired? Take part in one of our fundraising events and help support our vital research and lifesaving work.

It never crossed our minds it was anything more serious, especially bowel cancer as she’s so young.