Bowel cancer that has spread to the liver

When bowel cancer spreads to the liver it is called liver metastasis. This is the most common place for bowel cancer to spread. The liver is an organ that sits above your stomach on the right side of your body, underneath your ribs.

A team of liver experts will help decide the best treatment for you. Your oncologist or surgeon will discuss your options with you.

Treatment for bowel cancer that has spread to the liver could include:

Chemotherapy uses drugs to kill cancer cells. Your healthcare team may offer you chemotherapy to shrink the cancer. You may have one chemotherapy drug or a combination of two or three drugs. If your cancer comes back after treatment, you may be able to have chemotherapy again.

Read more information on chemotherapy drugs and their side effects.

A targeted therapy helps your body control the way cancer cells grow. There are different types of targeted treatment that destroy cancer in different ways. You may also hear it being called biological therapy.

Targeted therapy can be used on its own or with chemotherapy.

Targeted therapies don’t work for everyone. Your healthcare team might offer you a test to help find out if there are any targeted therapies that could work for you. This is called a biomarker test. The test could be a blood test or a test on a sample of your tumour from a biopsy.

You may be able to have an operation as your first treatment or after another type of treatment. Surgery is not suitable for every bowel cancer patient.

You may have surgery to remove the cancer from your liver. This is called a liver resection. The liver can still work normally even after parts of it have been removed during surgery.

Liver surgery is always carried out in specialist regional hospitals with expert teams. This means that it may not be available in your local hospital and you might have to travel to have your operation.

Your surgeon will try to remove all of the tumour(s) and leave as much healthy liver as possible. Some people might need to have half of their liver removed. The liver does grow back (regenerate) after surgery. If the right side of your liver is removed the operation is called a right hemihepatectomy. If you have the left side removed it is called a left hemihepatectomy.

For some patients, it may be possible to have surgery that removes tumours from both sides of the liver. This may need to be done in two separate operations several weeks apart. This depends on whether you are well enough to have surgery and there aren’t any other signs of cancer in your body. This is called a two-stage hepatectomy.

Liver operations are sometimes performed during open surgery through one opening in your stomach area (abdomen). This usually takes around five or six hours.

Keyhole surgery isn’t suitable for everyone and sometimes the surgeon will need to switch from keyhole to open surgery during the operation. Speak to your surgeon about the risks and benefits of both types of surgery and which option is best for you.

You may need to have treatment before surgery to shrink the tumour. This is called neoadjuvant therapy. It can include chemotherapy and other specialised techniques.

Some patients might have treatment to encourage healthy parts of their liver to grow before surgery. This is called a portal vein embolisation. A needle is put into stomach area (abdomen) that is guided by x-ray to a blood vessel in your liver. You will have a local anaesthetic. The procedure takes about an hour and you will probably stay in hospital for one night.

After surgery, you may have a short stay in a high dependency unit or a liver intensive therapy unit.

If you have open surgery, you will probably stay in hospital for around five to seven days. It can take around six to eight weeks to recover.

If you have keyhole surgery, you will probably stay in hospital for two to three days and it may take around three to four weeks to recover.

You are likely to have some pain and discomfort after surgery, but your healthcare team can help you manage this. They can provide pain relief, which will help you to get up and move around comfortably and speed up your recovery. Let your medical team know if you feel your pain is not controlled.

Not everyone can have liver surgery. If you can’t have surgery there could be different treatment options that are suitable for you. Your healthcare team will discuss these with you.

Ablative therapies use different energy waves to destroy the cancer. Probes (known as electrodes) are placed into the tumour through your skin. A CT or an ultrasound scan may be used to guide the electrodes into place.

Energy waves are then directed into the tumour to destroy the cancer cells. You will have either a general or local anaesthetic. Sometimes ablative therapies are used at the same time as surgery to treat tumours in difficult locations.

There are different types of ablative procedures that are used to destroy tumours in the liver.

Radiowaves are used to heat up the cancer cells to high temperatures and destroy them.

Probes that release microwaves are used to heat up and destroy cancer cells. Your healthcare team may recommend microwave ablation if the tumour is large or close to important blood vessels.

This is also known as known as NanoKnife. Electrical pulses are used to destroy the cancer cells. This treatment is only available in certain areas of the UK through the NHS. Sometimes it can only be received as part of a clinical trial.

Cyberknife is one form of SABR. Small radiation beams are directed from many angles so that they overlap at the tumour. This gives a very high dose of radiotherapy to the cancer. You may need to have small metal markers put into your liver before the procedure. These markers are guided by a CT scan. This treatment is only available in a few specialist hospitals at the moment.

HIFU is a new treatment that is being tested and may be available to some patients through a clinical  trial. Not everyone can take part in clinical trials. Speak to your healthcare team for more information.

HIFU uses a high-energy focused ultrasound beam to heat the tumour in the liver and destroy it. This treatment is carried out under general anaesthetic and can be carried out more than once.

Embolisation treatments use very small beads to block (embolise) blood vessels so that less blood goes to a part of the liver. The beads are delivered to your liver through a catheter. They stop blood going to the tumour which means the cancer cells are starved and can be destroyed. You will have either a general or local anaesthetic.

Small beads loaded with the chemotherapy drug, irinotecan, are put into the liver. The beads block the blood supply and deliver chemotherapy to the cancer. This procedure usually takes around one to two hours. After the procedure, you will usually stay in hospital overnight.

Small radioactive beads are injected into the liver. The beads block the blood supply and release radiation directly onto the cancer cells and destroy them.

This treatment can take between two to three hours. You may have it repeated. You can normally go home either the same day or the day after.

Back to ‘Treating advanced bowel cancer’

Back to ‘Advanced bowel cancer’ 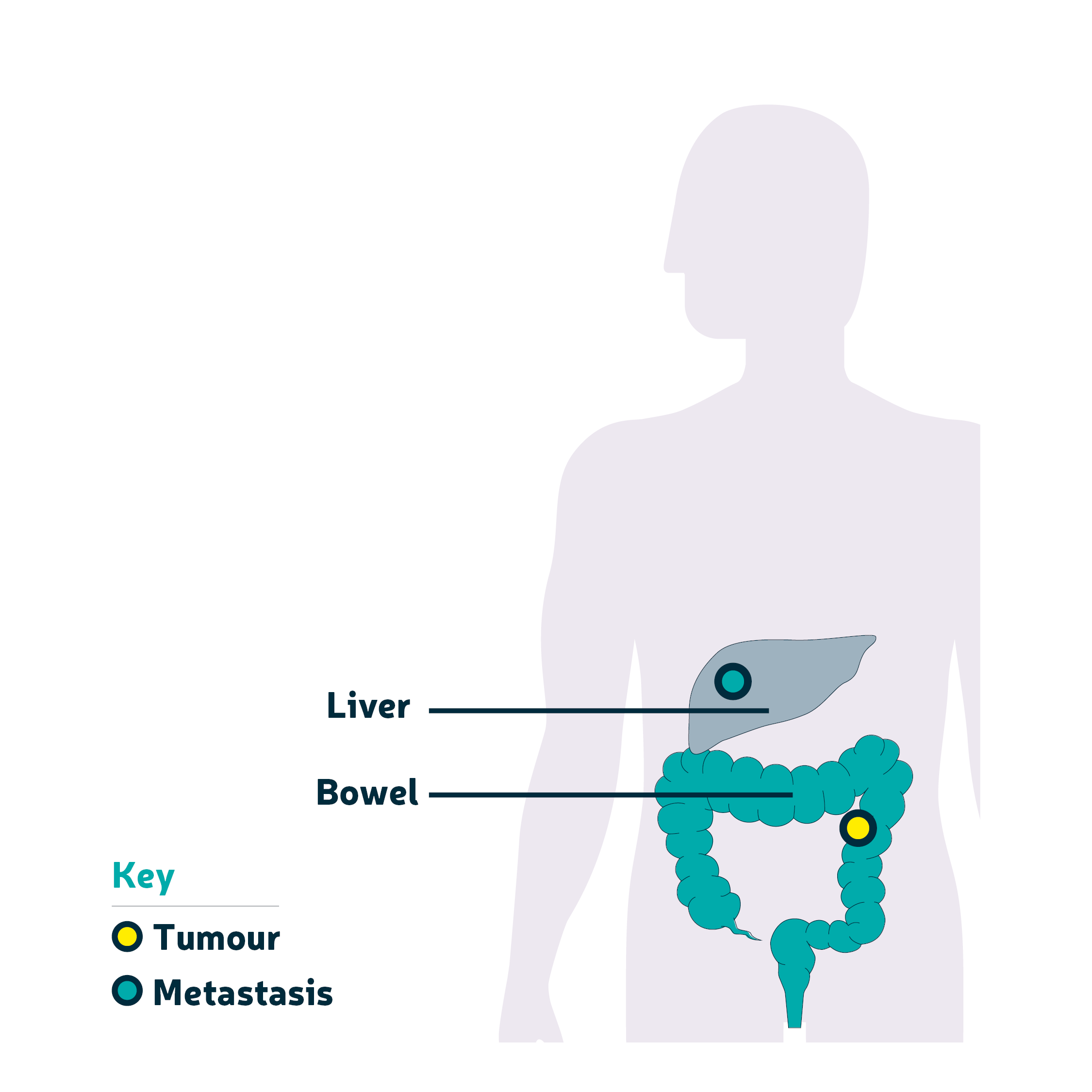