Why Matt's taking part in Decembeard

Matt Tebbatt, from Eckington, Worcestershire, is growing a beard this December after being diagnosed with bowel cancer at the age of 47. Matt will be spending Decembeard decorating his beard to raise vital funds and as well as raise awareness of the disease.

It was about July 2018 when I decided to go to the doctors with symptoms that just didn't feel right. I was having unusual bowel movements and had noticed a small amount of bleeding. After a few examinations and reassurances from my doctor that they didn't think it was anything sinister I lived with it for a few months. However, it was my perseverance that made me keep going back. I was particularly adamant because not only had a work college been diagnosed earlier in the year, my father had also been diagnosed a few years ago.

I was referred for a colonoscopy. Even on the day of the examination, consultants were hoping that this would be a routine check-up. But when you hear the clinical staff ask for biopsy kits during the examination I started to think they'd found something. As I feared, a growth was discovered which was described as being non-benign. So malignant then? That's when the shock kicked in! This shouldn't happen to anyone my age, surely, I thought.

Over the following few weeks, my mind started to wander and I started thinking the worst. Is it anywhere else? Has it spread? I was desperate for the CT scan to be done and the biopsy results to be in. It was really starting to mess with my mind.

My CT scan was done at Kidderminster Treatment Centre. And two weeks after, at the start of October, it was D-day. My wife Rae and I went to see the consultant and that was when he broke the news that I had bowel cancer. They were very quick to also say that it had not spread anywhere else. Blimey! That was a relief! I must say that the way it was said, the reassurance given, was truly wonderful. The consultant and nursing staff really put me at ease and I appreciated the honesty and sensitivity given. NHS, you are brilliant!

So, the investigations had been done and now the clock was ticking. I have really appreciated the speed at which my treatment has happened. I was admitted into hospital on 7 November for my operation to remove the offending part of my bowel. Evidence shows that the quicker you can get mobile the better your recovery will be. The first couple of days were a bit of a wash out, however day three was a transformation. I was up at breakfast time, had a shower and felt remarkably well. The physio team came to see me and we went for a stroll along the corridor, up and down the stairs and basically they said I'd passed their assessment. The next day, the doctors did their rounds and said I could go home. "Really? Already?" I said.

Since then, I've been recovering at home. Again, I've been amazed by my day to day improvement. I sometimes get told off for doing too much too soon. My wife and kids have all been amazing taking care of me and keeping my spirit ups. I've had so many cards, visitors and lots of cake!

From the outset, since finding out I had bowel cancer, I didn't want the subject to become taboo. For me, I wanted it to be part of normal conversation, something people can talk freely about, even have a laugh or a joke. I was having a drink in our local pub with a few pals and we started referring to my cancer by the name of Alan (sorry to anyone called Alan) which was funny: "Let’s kick Alan in the ……", "Get lost Alan". This meant people were talking about it. It just became part of the conversation.

It was one of my mates who noticed the Decembeard initiative and I thought "I can do that". I have a beard already but thought I could have a lot of fun decorating and colouring it. So, I'll be decorating, colouring, adorning, embellishing, sculpting and creating some facial architecture. My daughter Grace is going to be taking charge of the decorations and my son Sam is also going to be dying his hair to support me (he can't grow a beard yet).

Family, friends and work colleagues have all been amazing already with their donations. I've already changed my fundraising target twice! I've been amazed by the generosity of everyone and I think the reason that I've done well with my fundraising is because I've been very open about my diagnosis.

The power of social media is amazing. I've had donations from mates from 30 years ago, university mates from 20 years ago, work colleagues, friends, friends of friends, people from my local community, and most amazingly, from my son's school and college friends, some of whom I've never met. Astounding! The generosity of people is brilliant and we haven't even got to December yet.

I was going to write that I'm still not sure about the immediate future with regards to further treatment. But on 27 November I was informed by my consultant that I don't need to be seen again other than the routine, periodic checkups. Fantastic! No further treatment! No chemotherapy! All tests are shown to be negative for any more cancer! WHAT A RELIEF! I feel like one of the lucky ones. It's been found and diagnosed very early which and the same can't be said about everyone. I'm still very keen to make the most of Decembeard so that help and support can be given to others who might not be as lucky as me. Now I can put this behind me and carry on with life.

Fundraising for Bowel Cancer UK is essential. Whilst in many cases bowel cancer can easily be treated and cured, but people are still dying from it. Through fundraising more research can be done and more care and support can be given. 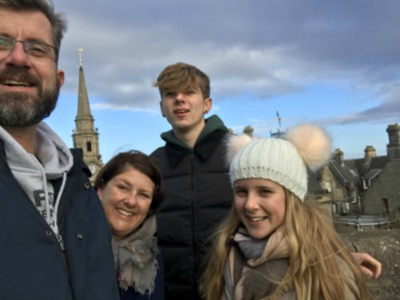