Why I ran the virtual Local Landmarks Half Marathon

I was diagnosed with bowel cancer in September 2017 and had my 47th birthday in hospital. I had lost three stone in the lead up to my diagnosis and lost at least one more during my four weeks at Cheltenham General Hospital. I came home weighing around seven stone.

I initially had the lower part of my colon, bladder, ovaries, uterus, cervix and some upper intestine removed, and a urostomy stoma created. Then just before I was due to go home after about two weeks in hospital, it became apparent that things were not right and I needed to go back into surgery. So after another operation I ended up with a colostomy also. I then had six months of chemotherapy.

I wanted to build up my strength and started walking while I was having chemo and a few months after finishing treatment I celebrated by completing a 50k walk (part of the Cotswold Way Ultra Challenge) and raised £2,000 for Bowel Cancer UK. A few months later, I slowly started running again building my fitness to run 5k, then 10k distances. Towards the end of 2019 I started running three times a week again, and I decided to set myself a challenge of running a half marathon and signed up the London Landmarks Half Marathon.

I had only taken up running when I was 39 and had only run 10 miles once before I got bowel cancer, so most of my long training runs in 2020 were all new longest runs for me.

After months of training, it was really disappointing to hear that it had been cancelled due to the coronavirus, but it was absolutely the right decision. I received an email from the charity saying the organisers are suggesting to do a virtual Local Landmarks Half Marathon instead.

A few days later, I received the worst news possible. My annual scan showed a tumour in my lung. These last few days have been very upsetting but I decided to go ahead with the virtual run.

I had a really lovely countryside run, avoiding the town landmarks, on a beautiful sunny day. I chose a flat route from Tetbury about 15mins away from where I live. The run was a bit slower than I had wanted but I really enjoyed it.

My fundraising target was £350 and I’ve very nearly raised double!

Feeling inspired? Sign up to a fundraising challenge to support people affected by bowel cancer 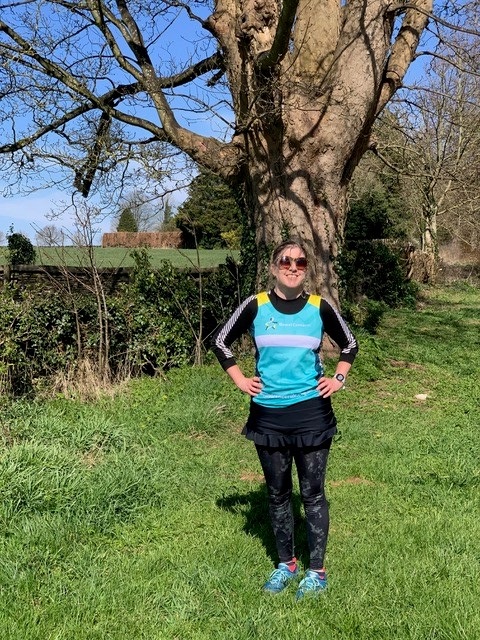