We have amazing at home heroes taking on the 2.6 challenge

Charities across the UK have asked people to be home heroes and take part in the 2.6 challenge on Sunday 26 April – the day the London Marathon would have taken place – and our very own supporters have whole-heartedly taken it on.

The coronavirus pandemic has had a catastrophic effect across the charity sector with events being cancelled and an estimated loss of around £4 billion, so the 2.6 challenge is to help make up some of the loss and save the UK’s charities.

We’ve been hearing about amazing fundraising ideas all themed around 2.6 or 26, from running 2.6km around gardens, to singing 26 songs about heroes, to hula hooping for 26 minutes and baking cakes with the number 26 on them. Read some inspiring stories below and sign up to be your own at home hero. 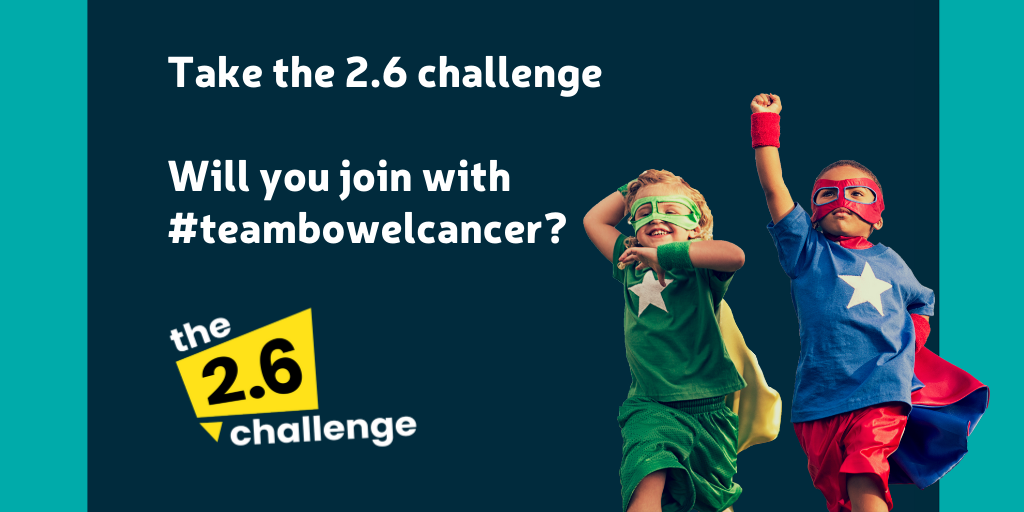 Sue (featured in red) was diagnosed with bowel cancer in January and had major surgery in March. As a family, with son Fin and partner Liz, they have planned a challenge to cover the 26.2 mile marathon distance in their garden and driveway.

Sue said: “I’m 48 years old. I’m a keen sportswoman and have an active lifestyle and healthy diet. I even ran the Eastbourne half marathon just three days before my surgery (right side hemi-colectomy), albeit much slower than normal! My family and I compete for our local running club Eastbourne Rovers.

My symptoms began in January this year when I experienced tummy pain after eating. The other symptom I noticed was that I was finding my running harder and I was getting gradually slower (which I thought was due to my age!). This makes sense now as my iron and haemoglobin levels had dropped significantly (as blood tests revealed).

As a family we have planned a family garden marathon challenge to cover the 26.2 mile distance in our garden and driveway. It seemed a good idea to raise money for the charity, and to have some family fun (before my three months of adjuvant chemotherapy starts next week).”

Sue has raised over £2,000 so far. Visit her JustGiving page. 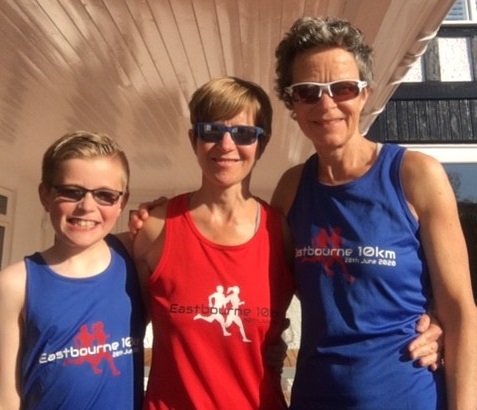 Heidi and Pete will be cycling to various locations in Essex, covering 26 landmarks in 26 miles. Heidi, who is now all clear from bowel cancer, is excited to be able to take on the 2.6 challenge. Heidi said:

“I was diagnosed with bowel cancer aged 36 and again at 38. I am thankfully now free of the disease due to the amazing treatment and care from our NHS.

April is Bowel Cancer Awareness Month, plus this Sunday should have been the London marathon, so lots of charities are encouraging people to fundraise and/or donate to recoup the losses caused by the pandemic.

Pete and I have decided to challenge ourselves to cycle to various locations around Essex, covering 26 landmarks, so we will be cycling roughly 26 miles.”

Heidi has raised over £500 so far. Visit her JustGiving page. 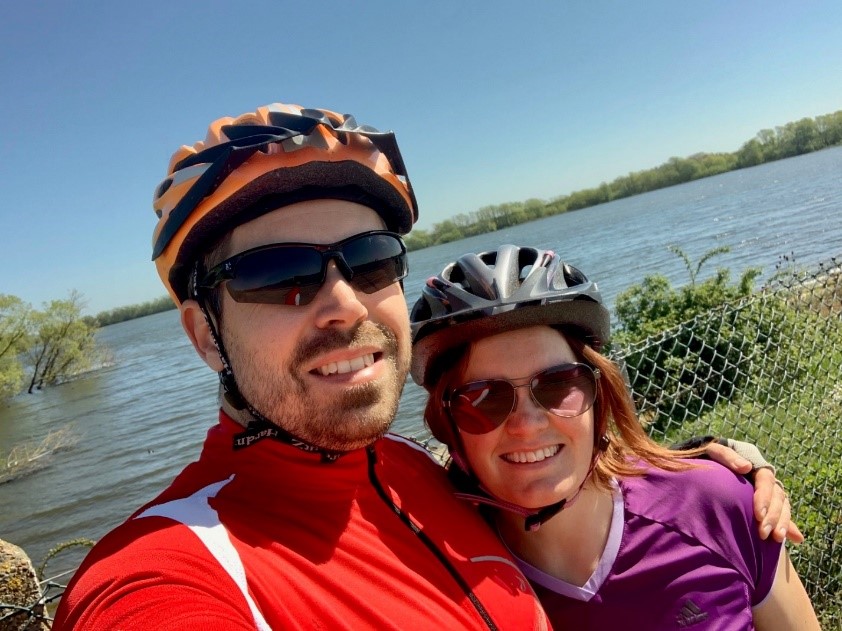 Etta is taking on 2.6km of walking, running and dancing around her house and in her local area (with Mum and Dad in tow) for her Uncle Leo who died from bowel cancer, three months before she was born.

Mum Heather said: “Leo had bowel cancer and was 42 when he died in July 2018. It would have been his 44th birthday on 22 April so the month is very important to us. Leo was always the life and soul of any party and is hugely missed by everybody that knew him.”

Heather has been posting regular updates of Etta and finding inventive ways to keep her on track:

“Etta has managed 1.6km and then stopped for a nap. She's woken up very ready to do more running around the garden so we're feeling more confident about Sunday!”

Etta has raised £480 so far. Visit her JustGiving page. 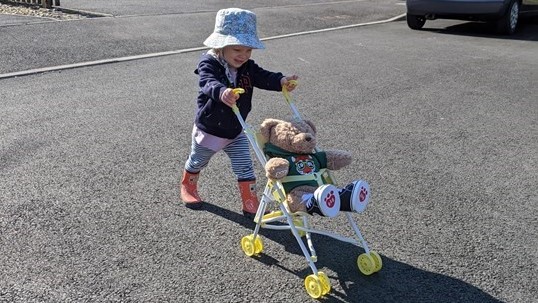 “My story goes back over 10 years. My wife Kay contracted bowel cancer in 2008 and was operated on and then had a session of chemotherapy. During this time I was also diagnosed with bowel cancer, so Kay and I shared the same consultants and oncologists, often together. I had radiotherapy, an operation, chemotherapy and then a reversal operation (I had a stoma for a year).

During this time I came in contact with Nicky via the Bowel Cancer UK’s online forum, she had recently lost her husband to bowel cancer and was bravely doing some counselling and we discovered we had hundreds of mutual friends through the soul music scene.

As I was getting my all clear unfortunately Kay’s cancer returned, and after a long fight she passed away in 2017.

Nicky and I remained in contact during this period.  But after a couple of dates by last December we both realised it was a bit more than just friendship and we have been pretty much inseparable since then! We will be walking my dog for 2.6miles for 2.6 days to raise awareness of bowel cancer. I have both sad and happy memories and now have a lot to be thankful for and live for.”

Take on your own 2.6 challenge 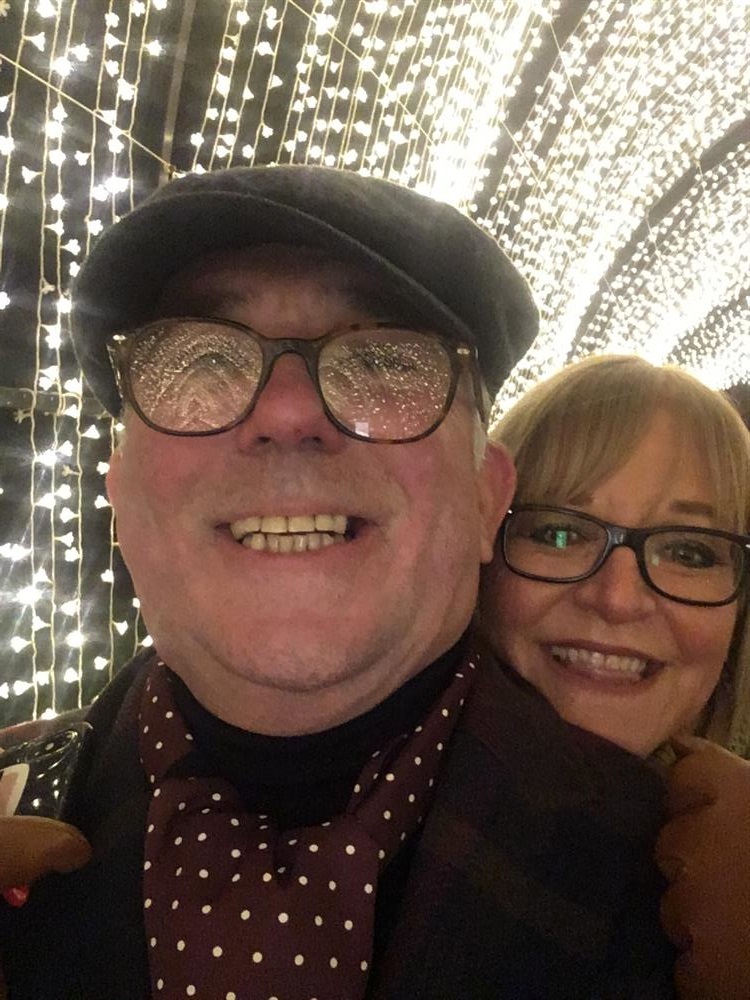