Tina's Walk Together for her mum and sister

Both Tina's mum Julie, aged 57, and her sister Tracey, aged 35 were diagnosed with bowel cancer, six months apart. The three of them took part in Walk Together to raise money.

In summer 2020, my sister Tracey was suffering with stomach cramps, nausea, dizziness and headaches, almost every day for three to four weeks. She went to her GP three times before they decided to do a blood test – they were reluctant to check for cancer and kept telling her she was too young. Her results showed that she had a low blood count and was lacking in iron. Tracey was given iron tablets and a bowel sample was taken. The doctor referred her for an endoscopy but when Tracey went to the hospital and explained her symptoms, they said they should have been doing a colonoscopy first. Tracey had an emergency CT scan, and her results showed something was visible on the scan, so she was booked in for a colonoscopy on the 29th September. It was during this appointment that they found a tumour and Tracey was diagnosed with stage 2 bowel cancer.

My mum didn't have any symptoms. She had lost a lot of weight but was doing slimming world so everyone assumed that was the reason. However she was having a lot of headaches, so she decided to go to the GP. She was diagnosed with anaemia and they suggested eating foods containing iron. When Mum wasn't feeling any better she went back to her GP and they referred her for a colonoscopy in March. Six months after my sister's diagnosis, my mum was also diagnosed with stage 3 bowel cancer.

In April, my sister Tracey signed up for the Step Up for 30 challenge. After having to go through all that surgery, holding her job and being a mum to her two little girls, as well as hearing the news of my mum's diagnosis, she smashed it and raised £360.

After having two of my loved ones diagnosed with bowel cancer, I felt like I had to do something. I searched bowel cancer online and came across Walk Together. I thought this would be a great thing to do and hopefully raise some money in the process. I asked my mum and sister if they would be up for it and of course they wanted to get involved. I wanted to do more than just one walk, so on my days off and after dropping mum off to her appointments I went for a walk and posted my walks online.

We decided to do our walk a few weeks after my mum's operation on 27 June, once she'd had a chance to recover. We started at my parents' house and walked through old Headington, which led to the John Radcliffe Hospital, where our journey of bowel cancer began, and then continued through into Oxford, where we are all from. From there we walked up through Cowley, which led to the Churchill Hospital where both mum and Tracey had their surgeries, before making our way back to my parents' house. The walk was supposed to be five miles but we ended up doing ten! Mum was in a wheelchair for majority of the walk and me and Tracey took it in turns pushing her. Mum even managed to walk up a very steep hill, which amazed us all. We had a brilliant afternoon walking together and we were grateful to be able to complete it together. We had a laugh together and it was such a special day for us.

Since completing our Walk Together we have had the fantastic news that my mum is cancer free! 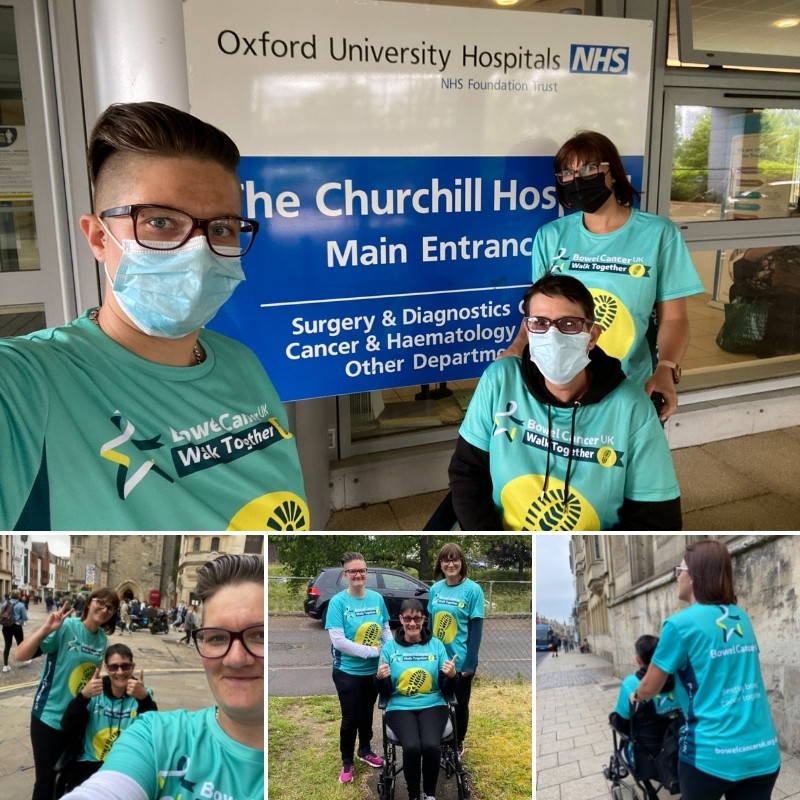