Carolyn Causton, 62 from Suffolk, was diagnosed with bowel cancer in March 2020. She shares with her experience of having a PICC line.

During her treatment, I attended every chemotherapy session and it took a huge toll, especially on her veins which even now are still partially collapsed. The good news is that her last scan showed she is cancer free, and she continues to make good progress in overcoming the side-effects of her treatment.

So as her treatment ended, mine began, but it began during a pandemic. Rather than have the surgery, radiotherapy and chemotherapy done and dusted in as short a time as possible, because of the risk of ending up in intensive therapy unit (ITU), which were overflowing with Covid patients at the time, my surgery was delayed. I had radiotherapy and oral chemo first, and from being diagnosed at the beginning of March 2020, my surgery didn't happen until the end of October.

With a new surge in Covid at the beginning of 2021, my chemotherapy (the 'wrap up' to reduce the risk of recurrence) was postponed until February, and when my consultant said I'd need a PICC line, my face fell and I was worried. My only experience of PICC lines had been when I worked in a small hospital and they were used for palliative care at end of life. I don't like needles at the best of times, but the thought of having something plugged into my arm all the time worried me, to say the least.

I mentioned it in my blog, and I shared with friends on social media. The response from friends who knew what I was going through, who had been through similar things themselves or with their families, was amazing – PICCs are great!

Really? Yes – really! The experience of having the PICC inserted was not a lot of fun, but I had a wonderfully expert nurse specialist who inserted it, and a lovely nurse holding my hand and reassuring me as it was done. It hurt a little, but not in a scary way, in a 'this is uncomfortable and the thought of having a tube stuck in my arm and coming out over my heart is weird'.

I swear for the next couple of weeks I could 'feel' the line, but in truth you don't, you are just aware and make up the feelings to go with the knowledge.

I've now had five courses of chemotherapy, and notwithstanding all the side-effects and impact of that, the PICC line has been wonderful. Not only do I not have to have injections all the time for the chemo, but my pre-chemo bloods can be done at home, meaning no extra trips to the doctor or hospital. My partner does my line care (weekly flushing and dressing change) and pre-chemotherapy blood taking – and not a needle in sight!

In short, the PICC makes life easier. I am used to it now, to having to cover it up when I shower, and to the routine of line care. I needn't have been frightened, and it makes one aspect of having cancer during these difficult times a lot easier. 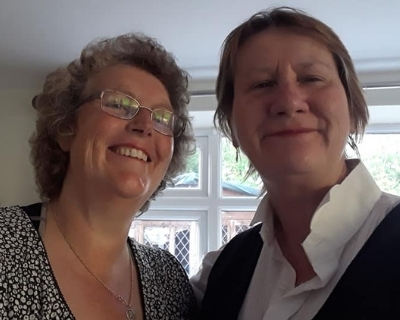 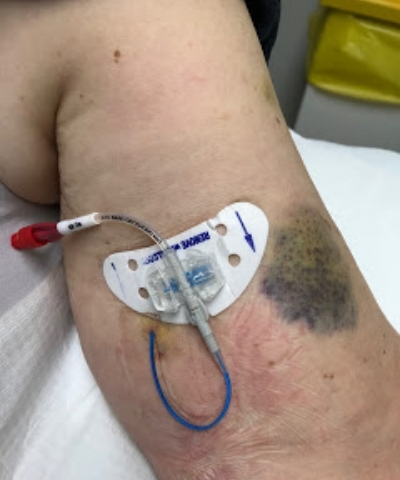