Vicki McHugh, sadly lost her friend and colleague Sophia Sangchi in November 2019 at the age of 31. In her memory Vicki took on a virtual swim of the English Channel and raised over £1000.

Sophia Sangchi, a former colleague at Christie & Co, made us aware of one of Bowel Cancer UK's flagship campaigns, 'Never Too Young', leading the change for younger bowel cancer patients. Sophia's tenacity and passion inspired us to commit to fundraise for this worthwhile cause.

Sophia worked as a property agent in our Bristol office for several years. She left to follow a career in the bright lights of London. Before she left, she had not been well on a few occasions, often putting it down to high living and poor diet, although she did seek medical advice, but to no avail.

We were shocked to learn of Sophia's plight, her misdiagnosis and subsequent operations. She then had to deal with secondary cancer and all its unknown consequences. Even through all of this, she stayed focused and determined to make a difference in some way, if not for herself, then for people in the same predicament in the future. Sadly, Sophia lost her battle with bowel cancer in November 2019 at the age of 31.

Unfortunately, even with our best laid plans, our fundraising was one of the many casualties of the Covid-19 pandemic. Many ideas and good intentions halted by restrictions, guidelines and health criteria. Stuck at home, like so many others, I first turned to my sewing machine, a happy medium for me, and produced face masks which I sold to colleagues and friends giving a well needed boost to the cause.

As time went on and restrictions extended, it was time for a real challenge, but something that could fit with our ongoing enforced lifestyles. I know, "I will swim the English Channel!"

Fortunately for me, at the time France was still fluctuating between Red and Amber on our destinations list. Therefore, I would have to do this virtually. No change there then – just about everything in the last 15 months had been done virtually! I say "virtually" – there was water and swimming involved, just within the confines of my local pool and no need for a passport.

Not known for my physical commitments, this was going to be challenge.

The distance of 22 miles across the English Channel converts to 35,405.6 metres and my local pool is a standard 25 metre pool. At the beginning I was averaging over 40 lengths per visit and hoped to swim three times a week, with the hope of completing the challenge by the end of August.

So, I set up a JustGiving page – it's the easiest way to get any donations to your charity, gives the opportunity of Gift Aid additions and takes away the hassle of having to handle any cash. I wrote a small introduction and emailed it around my colleagues and friends. I ensured I updated the JustGiving page weekly with my total distance achieved and any new personal bests.

When I hit certain milestones; halfway to my fundraising target; halfway across the channel; inspiration from the Olympics; the 'sighting of land' and, of course, my final swim – I ensured I let people know by sending posts to the internal news in my office, on my Facebook page and also on LinkedIn. This made sure that anyone who knew me was aware of what I was trying to achieve and gave them the opportunity to pass it on.

To ring the changes, I also wanted to show willing and attempt a wild swimming session. I did this during my last week, managing to pick one of the coldest days this summer and leaving it until the evening before dipping my toe in the salty water. This said it was most invigorating and I would recommend it to everyone. I will be trying this again.

So now my challenge is over. My initial average per session increased to 60 lengths, but I achieved a personal best of 62 by the end. The power of my strokes in the pool increased, therefore reducing from 25 to 20. Stamina increased throughout and, by the end, every session was completed without a break mid swim.

It has been a challenge, one I thought I would struggle with, but was determined to see it through. I have enjoyed most of it, feel fitter and healthier and proud to have raised money for the 'Never Too Young' campaign. I am blown away by the generosity of people. My £500 target was more than doubled. But lastly, I know that Sophia, a woman of unending enthusiasm, party animal, loud and hysterically funny, will have approved of my ridiculous bright pink swimming hat!

Read more about the 'Never Too Young' campaign. 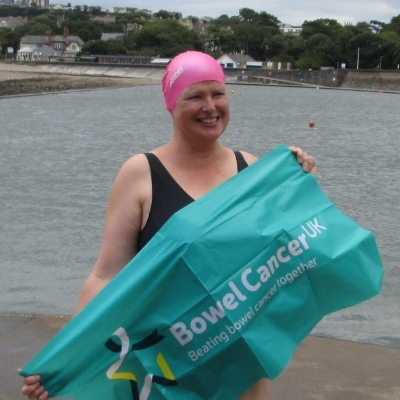 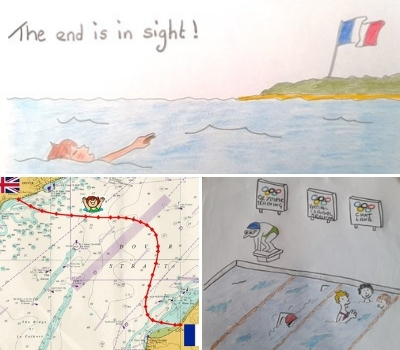