Running the Tatton Half Marathon for her beloved nana

Olivia Withers, 21, from Reading, is running her very first half marathon to support her wonderful grandmother, who's survived bowel cancer twice.

My nana was 26 when she was first diagnosed with bowel cancer. She was pregnant at the time with her first son, and no doubt the symptoms of pregnancy masked the disease. One day when she was around 31 weeks pregnant, she was very ill and was rushed to hospital. She had a c-section and it was during this procedure the doctors found the bowel cancer. She had a number of operations and after three months in hospital made a full recovery.

However, 42 years later, when nana was 68 the cancer returned. I was quite young at the time, but I remember her being in hospital. She had chemotherapy but again made a full recovery. My granddad, her husband, died from bowel cancer when my dad was younger, but she then remarried.

As bowel cancer runs in the family on both sides my dad and my uncle both have regular colonoscopies to check them and reduce their risk of developing bowel cancer in the future. We are currently having genetic testing done as my nana's consultant recommended this due to her having a faulty gene. This research is amazing as it can tell us whether my dad has the same gene and therefore whether my brother and I will have it.

I am very close to my nana, we've been on holiday together and I speak to her on the phone several times a week. We've got such a special bond and she means the world to me. She's an inspiration, surviving bowel cancer twice and she was diagnosed with pneumonia just before lockdown. She's 84 now and is still very active – I'm in awe that she can still play 18 holes of golf.

I really wanted to do something positive to support my nana so I decided to run the Tatton Half Marathon. I grew up near Tatton Park in Knutsford, Cheshire, and often spent a lot of time with her walking there, so it's quite fitting.

I've always tried to get into running, but when lockdown hit, I moved to Reading and that's when I took exercise more seriously. I now run frequently for the enjoyment and I find that it really clears my head, the health benefits are also amazing. The half marathon is on Sunday 25 April 2021 so I don't have long to go, but my training is going really well. I initially wanted to raise £200 but I've reached that already, so I'm hoping to raise a bit more. 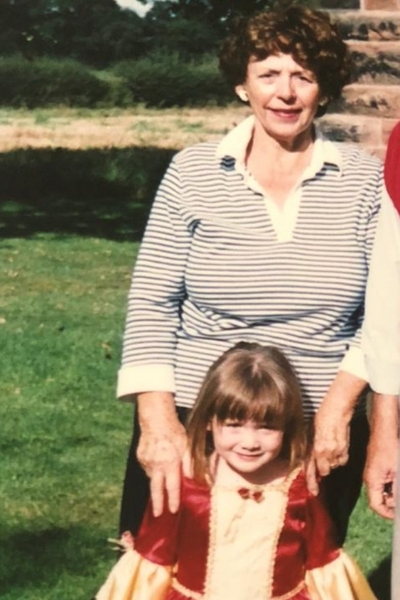