Running the Herts Half Marathon for his best friend Steve

Steven Thumath, who lives in Australia, was diagnosed with bowel cancer earlier this year. His best friend Nigel Harding took on the Herts Half Marathon to support him and others with the disease.

I found out that one of my best friends, Steven Thumath, was diagnosed with bowel cancer earlier this year. He's 50. He lives in Queensland, Australia, so I don't get to see him that much anymore, but he is still one of my best mates. During lockdown I started running with my friend, Gordon Scott, to get fitter. We decided that if we have a goal to aim for, we'd continue running together, which is why we signed up for the Herts Half Marathon. Knowing how much I miss Steve and what he must be going through, I decided to raise as much money as I could for Bowel Cancer UK, because there must be other people like Steve in the UK, who will need help and support. Going for a 13-mile run around Knebworth was my way of trying to help as much as I could.

I've never done anything to raise sponsorship money before, and I'm really pleased that I chose Bowel Cancer UK. I know the money raised probably won't help Steve directly, because he's in Australia, but I'd like to think that what I have raised will help someone else's Steve here in the UK.

I found the run a really enjoyable experience, everyone on the day was really supportive. Other runners were giving lots of encouragement, which I never expected. When I went over the finish line, my wife Shelby and daughter Phoebe were there waiting. There were tears and lots of hugs and that was just between me and Gordon! It was a proud moment, knowing that I've helped raise some money for this amazing charity.

Since the run, I've had nice messages from people I don't know who also support the charity, who have found me on Instagram. I've had messages from people in Australia that I don't know too! So hopefully it's made others aware of what they can do to help this fantastic charity. I'm so pleased that I chose Bowel Cancer UK as my first charity to fundraise for, and I've raised more than £800 for this wonderful cause. 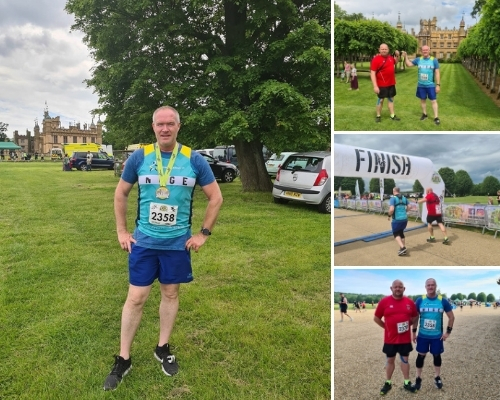