Last year, we announced cancer nurse specialists Eleanor Rae at the University Hospital Wishaw and Angela Wheeler at Barnet Hospital, London (Royal Free London NHS Foundation Trust) as joint winners of our Gary Logue Colorectal Nurse Award. They were nominated by patients for delivering outstanding care for those with bowel cancer and their families.

“It was an absolute pleasure, and surprising at the very least, to have been nominated for this award, and to have won it was the ‘icing on the cake’. I’ve been a nurse at the University Hospital Wishaw in Lanarkshire, Scotland for over 40 years, and to be recognised in this way reassures me that I must be doing something right.

I was nominated by patients, which makes it all the more special. For them to take the time out of their busy lives, at a very challenging time for them, is humbling. I’m hugely grateful for their support.

At the award ceremony, ITN journalist and patron of Bowel Cancer UK Charlene White spoke about her own experiences of working with nurses when her own mum was diagnosed with the disease. Charlene was only 21 when her mum died.

She presented me with a certificate and £400 to be spent on my professional development. A year later, I haven’t quite got round to spending it due to my work commitments, but I have plans to develop my career in pre-habilitation, post treatments and aftercare. This money will definitely come in handy to do that!

After the award ceremony, I heard from so many patients and their families, both past and present, congratulating me on my achievement, which was so lovely. I also received messages from family members, who had unfortunately lost a loved one. I was so moved that they not only remembered me but they took the time to contact me. I also heard from a friend of Gary Logue to congratulate me, which was so touching.”

“It was a great honour to have won this prestigious award for doing a job that I love. I’ve been a nurse at Barnet Hospital for more than 10 years, and I consider it a really privilege to work, care for and support patients and their families affected by bowel cancer.

Winning the award really has been the biggest achievement of my career to date, and being nominated by patients, makes it all the more special.

Like Eleanor, I still haven’t got quite round to spending the generous award money, but I would love to use this to develop my knowledge in the role genetics play in bowel cancer. I’m just waiting to find the right course. I look forward to enhancing my knowledge and therefore benefitting my patients and practice.”

The awards were set up in memory of Gary Logue, who worked as a nurse for the charity and passed away in 2014, in honour of the tireless dedication he showed during his career.

Do you know an exceptional colorectal cancer nurse specialist who you think should receive a special award? We’re marking the achievements of those nurses who make a huge difference to both the lives of their patients and their colleagues.

We are welcoming nominations from those cared for by, or working with, an exceptional colorectal cancer nurse.

The awards will be presented at the National Colorectal Cancer Nurses Network (NCCNN) Study Day on 13 September at Macdonald Burlington Hotel in Birmingham. 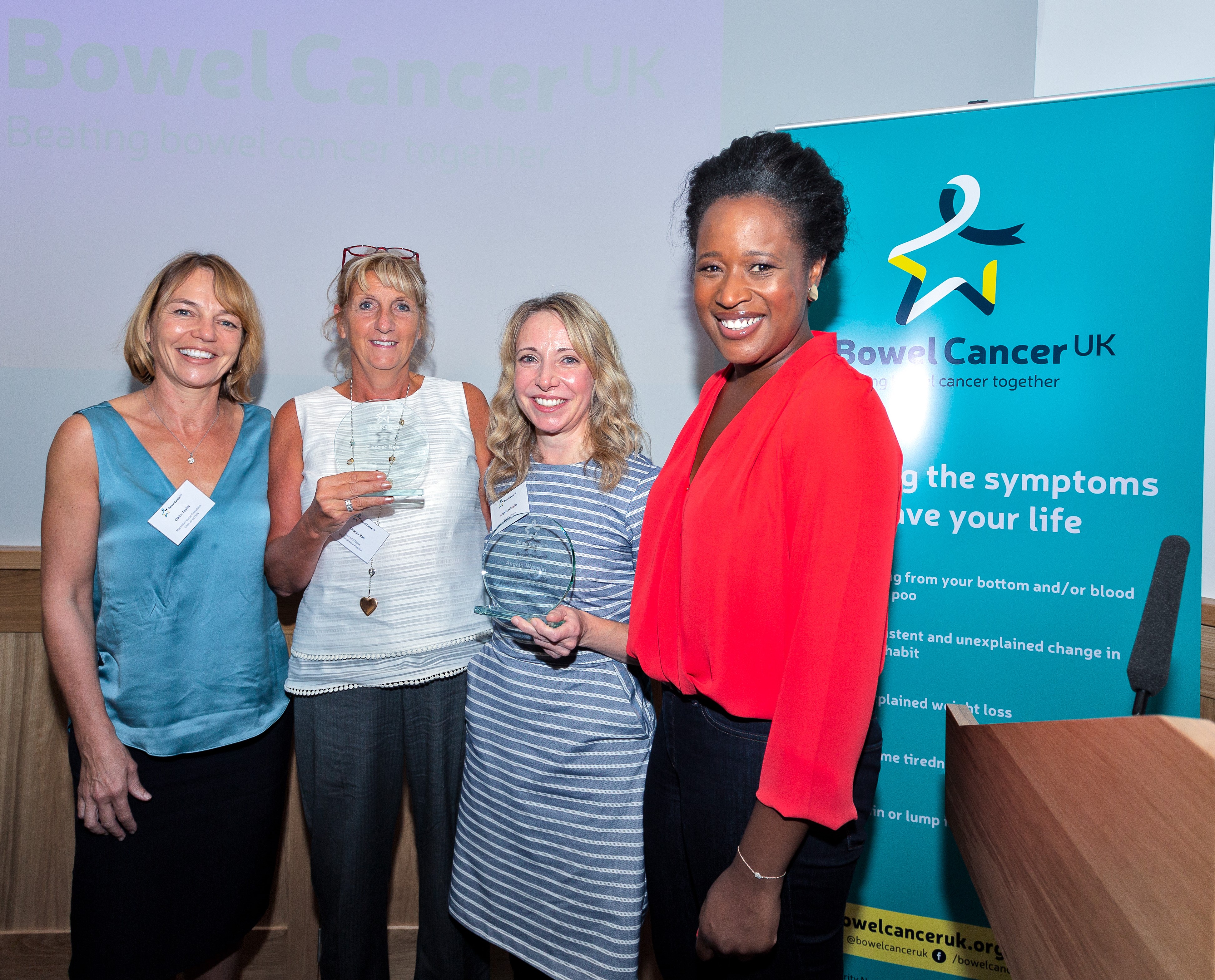