How Jody swam the English Channel with bowel cancer

Jody Jones, 41 from Hertfordshire, swam the English Channel in August 2019, in between chemo cycles for stage 4 bowel cancer. She shares with us how she did this amazing challenge.

My English Channel attempt was four years in the making – it should have been three years, but I was diagnosed with bowel cancer shortly after booking the swim in 2015. Life has a way of throwing a fast ball at you sometimes!

I booked my Channel solo swim when my youngest daughter was nearly three months old, shortly after completing my two hour qualifying swim for my 2016 Channel relay. You have to book a long time in advance as there are only 12 boats that are licensed to pilot Channel swims and there is a lot of competition for getting a good tide.

From then my training was geared towards building up to the biggest endurance challenge I thought I would ever face. Channel rules dictate that you may wear a standard swimming costume (no wetsuits allowed), a swimming hat, earplugs and a pair of goggles. You are not allowed to touch the boat or anyone on it for the duration of your swim. Less than 2,100 solo swimmers have completed this swim since the first successful solo back in 1875. More people have climbed Mount Everest.

In July 2016, my relay team ‘Missed the Ferry’ completed our Channel relay in just under 14 hours and a month later, I completed my 10.5 mile Windermere solo and began training for my solo Channel attempt in earnest.

In 2017, I focused on really building up my mileage, seeking advice and improving my technique. I joined the Serpentine Swimming Club in Hyde Park – an eclectic mix of Channel swimmers, dippers and everyone in between.

I carried on entering various 10-14km swim events and training hard in all weather conditions to increase my hours in the water and to further develop my ability to withstand both rough and calm seas with the Channel training group I swim with in the sea at Bournemouth.

Through the Serpentine, I met my now very dear friend, Scott, who asked if I would be on his crew for his Channel solo in August 2017. I felt really honoured to have been asked as having a strong crew is a key element of a successful attempt. I learnt so much on that day (from feeding technique and equipment, to support swimming, to geography of the Channel, to the highs and lows that a swimmer goes through during a swim), and being able to swim in with him to the beach in France after 14 hours 11 minutes continues to be one of the absolute highlights of my entire swimming career.

I also came across a lady called Tracy, who seemed to live and breathe Channel swimming and runs Channel training camps in Dover. I asked if I could join her Varne Ridge English Channel Swim Camp in October 2017 and so began a very dear friendship. I carried on racking up the mileage and time in the water in preparation for the camp. I arrived at camp feeling quite nervous, as I often am around new people – would I be able to make the grade and would I be the least experienced? I soon found myself surrounded by people just like me – all from different swimming backgrounds and places, but all with one thing in common – we all wanted to swim to France.

Camp flew by and was an incredible experience. I had added to my growing ‘Swim Family’, added some substantial mileage to the pot and learnt a huge amount about myself. My confidence had grown and I’d gone from arriving at camp thinking that I would try to swim the Channel to feeling that, weather-depending, I had a pretty good chance of getting a pebble. I finished the week off with a 10km swim my favourite heated lido for good measure!

A few weeks after camp and still on a high, I started getting some increasingly painful and persistent abdominal cramps. After getting checked out by the doctor a few times to rule things out, he referred me to a consultant and a week before Christmas I has some surgery which came back with a shock diagnosis of bowel cancer that had spread to my liver, making it stage 4.

I was 39 years old, with two small children, was fitter than I had ever been in my entire life and was due to swim the English Channel just eight months later. I had to have emergency surgery to remove a 15cm tumour and over half my bowel ten days later and started six months of fortnightly chemotherapy in the February. The surgery meant that I had to delay my swim to August 2019.

I was back in the pool five weeks after my surgery (with the permission of my surgeon of course!) and was able to train throughout my chemo on the days when I was feeling okay.

Just three weeks after my chemo had finished, I did a five hour sea swim at Durley which gave me a huge mental boost. In total, I’ve had seven surgeries and have so far had 24 cycles of chemotherapy as well as dozens of scans. Following a reoccurrence earlier this year, I am now likely to be on chemotherapy for the rest of my life and am likely to be incurable (but currently stable). I currently have to have numerous chemotherapy tablets every day as well as a day in hospital every two weeks for intravenous chemo.

Eleven weeks after I started back on my chemo this year, having been blown out of my original tide by the weather and very unexpectedly losing my mum in July, I got the call from my pilot, the wonderful Paul Foreman, asking if I wanted to swim on 27 August, just after I’d had my 22nd round of chemo.

My amazing crew (consisting of Scott, Tracy, my husband Rich and another successful Channel Swimmer friend, Mark) all piled down to Dover Marina to start my swim just as the sun came up.

Conditions were beautiful, the water was around 18 degrees and I started my swim at Samphire Hoe beach. It was a very hazy day so in spite of me swimming across the busiest shipping lane in the world, I only saw two, albeit giant, ships all day. You could hear the occasional foghorn sounding, but that was it.

In terms of marine life, we had a rather large seal swim near me for a while and there were jellyfish of various types and sizes happily stinging me all day! As the sun went down, my right shoulder began to get increasingly painful and I no longer had the warmth of the sun on my back, but onwards I swam towards France. I had no idea how long I’d been swimming for until the sun went down, or where I was in the Channel, all I knew is that I had to keep going.

It was now night and the boat’s spotlight was on me to guide me in the right direction. The spotlight attracted shoals of fish which was nice as it meant I had something new to look at and keep my mind busy.

Marathon swimming can be a very lonely sport as you can’t talk to anyone, there isn’t much to look at, you can’t touch anything other than the water so you suffer a bit from sensory deprivation. Finally, I saw the light from the lighthouse at the top of Cap Gris Nez and I knew that it was time to really dig deep to finish this swim.

As I could feel the tide starting to turn and push me back up the Channel towards Calais, I could also feel a strong wind pick up and soon had waves crashing all over me but I knew that I had to keep pushing through for another two or three hours in the pitch black if I wanted to achieve my dream of becoming a Channel Swimmer. It was just at this point when I swam straight into an unseen jellyfish that stung me right across my face. I’d had dozens of stings on my arms and body, but that one really, really hurt and my face was still sore and swollen the following day.

We kept on going and then all of a sudden Paul, my boat pilot called me over to the boat for my feed and said the words I’d been waiting to hear, “Last feed Jody! One last push and you’re there!”. I kept on swimming, surrounded the whole time by harmless but large barrel jellyfish, glowing in the darkness.

The bio-luminescence from the plankton flowing off my hands as glowing bubbles in the dark water as my stroke disturbed them was hypnotising. Before I knew it, I could see my crew putting on their swim kit and glow sticks to join me in the water. This could mean only one thing. I was nearly there and they would all be swimming me into the beach!

Then I saw the most beautiful sight. Below me, but still just out of reach, I could see rippled sand. Eventually I could touch it with my hands as I swam and my goggles filled with tears. I’d done it. I was minutes away from becoming a Channel Swimmer in between chemo cycles, which I believe is a world-first.

My husband Rich, and dear friends, Tracy, Scott and Mark swam me up to the beach at Wissant in the early hours of 28 August, after swimming for 18 hours, 14 minutes and 30 seconds.

Everyone on that boat, the aptly-named ‘Optimist’, worked tirelessly to make sure I had the best chance of becoming a Channel Swimmer. It was such an honour for me to be able to share that moment with them – it is something that will always bond us together and will always be one of the most wonderful and emotional moments of my life, second only to having my children.

All the while during my swim, I was oblivious to the support that was gathering around me through social media until I was told that I’d had a shout out by Zoe Ball on her Radio Two show.

Paul Foreman said to me a couple of years ago, “Jody, picture yourself walking up that beach in France every single day.” And that is exactly what I did, every single day, until I actually did.

Feeling inspired, sign up to one of our challenges 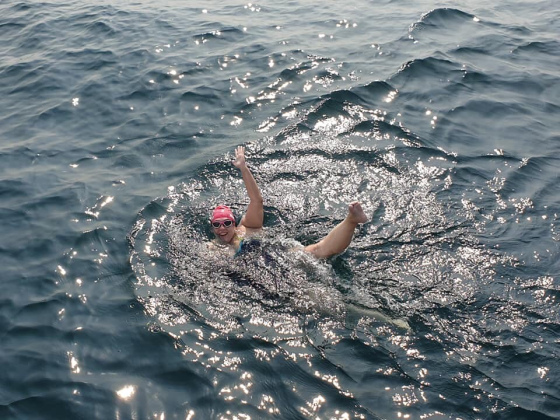 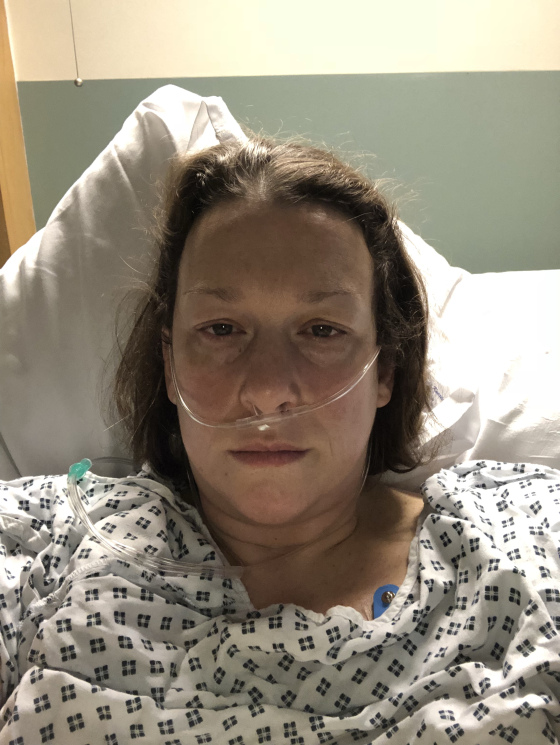 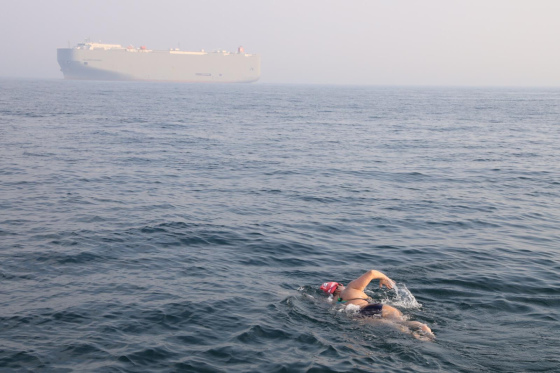