After an employee sadly lost their father to bowel cancer, accounting firm Gascoynes has taken on numerous fundraising challenges and raised an amazing £2,656.

An employee's dad fought and unfortunately lost his battle with bowel cancer only a few years ago. This meant when we were looking to fundraise again as an accounting firm, we wanted to do everything we could to support her and help a charity that would have a positive impact on people with bowel cancer and the support the people around them.

Since we started fundraising for Bowel Cancer UK the more stories we have heard of others being affected by the disease. Another of our employee's Auntie was diagnosed earlier this year and her grandad won his battle only two years ago. The reason to raise money for the charity quickly became more poignant to a number of the employees.

Our first fundraising activity was the Suffolk WholeHog. It is a five-mile mud run, which consists of 30+ obstacles. Some of the obstacles include cargo nets, monkey bars, dark tunnels, slides, and logs to climb over. Gascoynes is a relatively small firm with 21 employees, and we were so incredibly happy that we had nine people sign up.

Now let me walk you through my experience. You start the run across the fields excited for the journey ahead or excited to get it over with. All of 200 meters into the race you are greeted with a ditch full of mud and water, oh and one of the marshals spraying you with a giant hose. And that was them easing us in. The rest of the race then includes climbing over wooden obstacles, carrying tyres, and tackling all over obstacles while covered in mud and water and I mean covered.

At the start of the race, we had on our bright Bowel Cancer UK t-shirts looking pristinely clean. Well, that didn't last long. By the end of the race, we were lucky to have any of the shirt left that wasn't covered in thick brown mud.

To make matters worse, it had been raining a lot only a few days before the race so all the rivers and lakes we had to walk through were full to the brim and colder than any water I have even been in. Yet you welcomed the water just to get the chance to clean some of the mud off. I think our faces in the pictures say it all.

A particular highlight of mine was the slide into the lake as it was the first time in 2 miles that I felt clean again. That and watching one of my colleagues getting wiped out as he tried to help someone stop at the end of the slide.

As for the worst, I think all nine participants would agree on this. By far the most testing element of the race was trying to squat and crawl our way under a tarpaulin that was right next to a pig field. The main issue with this being the 'mud' we were getting covered in was the worst thing any of us have ever smelt in our whole life, this is not an exaggeration.

They say a picture is worth a thousand words and honestly, I think that is very true here. The photos tell you the story of everything we had to endure to get to the end. The great news is not only did all nine of us get round in one piece but we managed to raise £1,385 from this event alone.

Back in September this year we also put on a Quiz night and raffle, which was incredibly successful. We had 16 teams turn up and a variety of very generous raffle prizes mainly donated by local businesses. We had lots of positive feedback and managed to raise £1,140 on the night. We will have to put on another quiz night in the future though as a rival accounting firm won!

We did a few in-house activities such as dress-up theme days and a company bake-off. In total for the year, we have managed to raise £2,656 which Gascoynes will be matching. 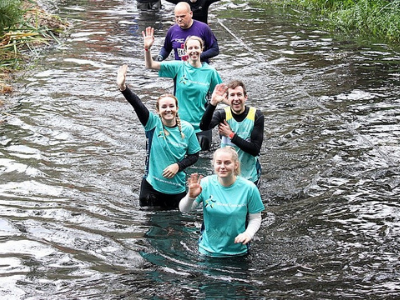 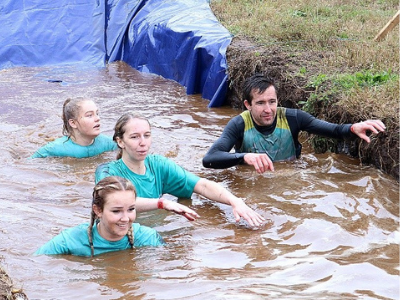