2021 was a year of challenge, uncertainty, and outstanding achievement for the Bowel Cancer UK family. Quite simply, it was a momentous year and here's why: 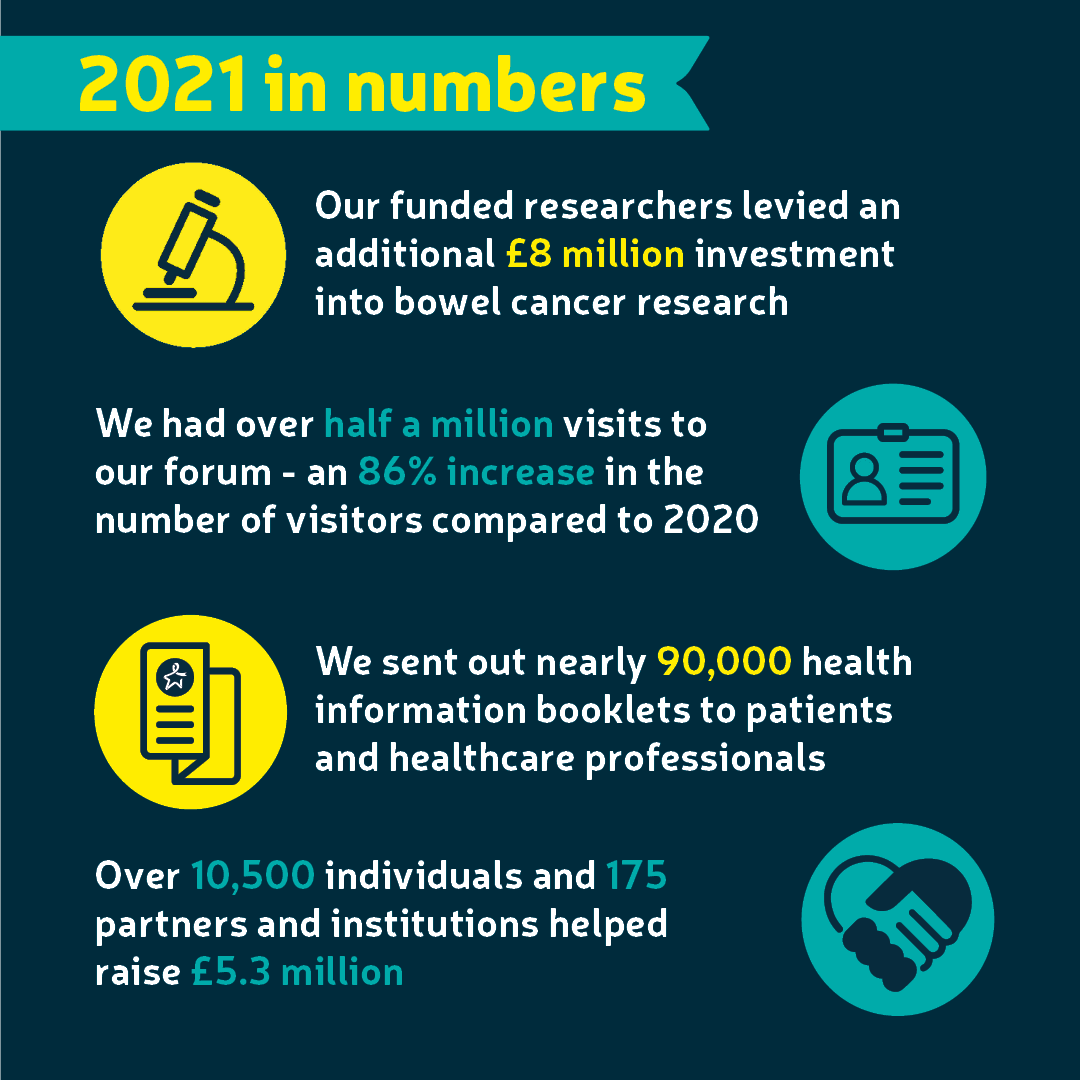 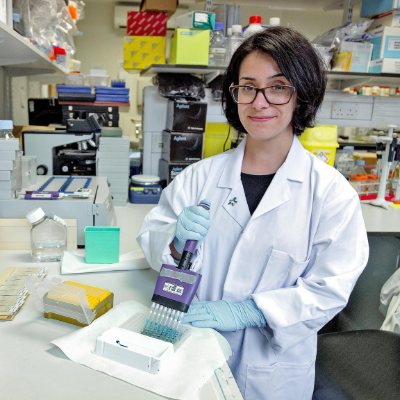 Investing in research for the next generation

We also received £66,000 towards our pivotal Scottish Surgical Chair, which will create new opportunities for surgical clinical trials to improve treatment and outcomes for people diagnosed with bowel cancer across Scotland.

From increasing the sensitivity of the faecal immunochemical test (FIT), which will help to identify more cases of bowel cancer in young people, to developing new patient information on recovering from surgery and inviting men at an earlier age to take part in screening.

Find out more about how our support and targeted research is helping to stop people dying of bowel cancer. 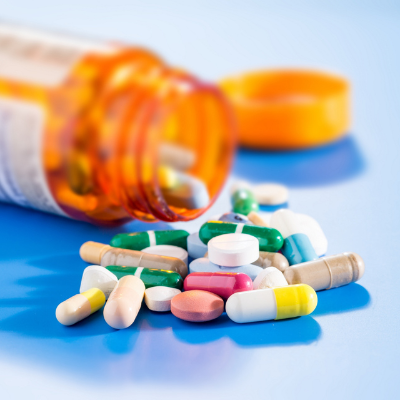 We helped secure approval for three new drugs to benefit advanced bowel cancer patients in the UK, who often have few other treatment options:

Learn more about our Get Personal campaign, which aims to improve access to treatment and quality of life for those diagnosed with advanced bowel cancer. 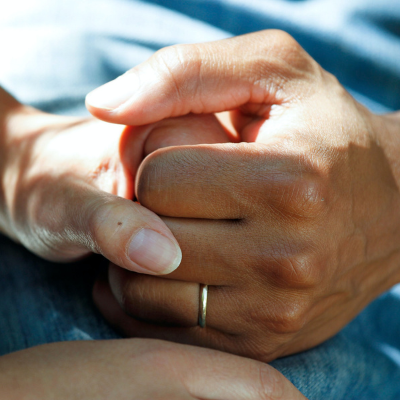 Greatest ever reach for our services

We provided over 1.7 million moments of support to people affected by bowel cancer, and their loved ones.

We held two digital engagement events – attended by over 170 people – with Dr Philippa Kaye, a GP who writes a weekly column in Woman magazine and is regularly seen on ITV's This Morning speaking about her personal experience of the disease.

There were more than 500,000 visits to our forum, an 86% increase in the number of visitors compared to 2020. Our Facebook support groups, first launched in 2019, continued to go from strength to strength with over 1,155 members accessing help and support. And we reinstated distribution of our printed publications, sending out 88,290 patient information booklets.

Read more about our support for people affected by bowel cancer and their loved ones. 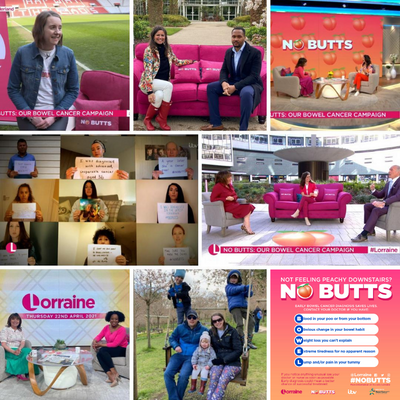 For the first time in our history, bowel cancer was a focus of a campaign on national daytime television when it featured on ITV's Lorraine.

Over the course of Bowel Cancer Awareness Month, their 'No Butts' campaign highlighted symptoms of the disease. Our patron, the late Dame Deborah James, as well as experts and supporters affected by bowel cancer appeared on the show, playing a huge part in helping to raise awareness with new audiences.

Share your experience of bowel cancer to help raise awareness of the disease in the media. 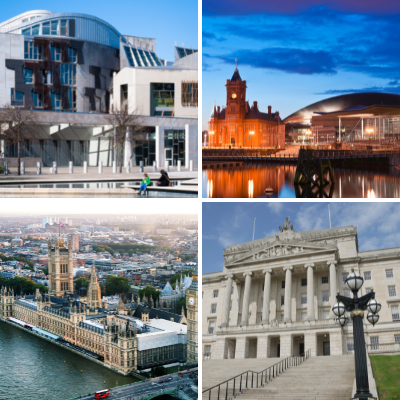 Keeping bowel cancer a top priority in the government

Keeping bowel cancer high on the political agenda remains a top priority for the charity. We launched a new report, 'Improving Bowel Cancer Outcomes: A Roadmap for Change', which set out the major challenges facing bowel cancer services in the UK and the impact this is having on patients and outlines a roadmap for change.

We were instrumental in lowering the bowel screening age to 56 in England and 58 in Wales – a step in the right direction towards screening at 50 for all.

Read more about our campaigns and how you can get involved. 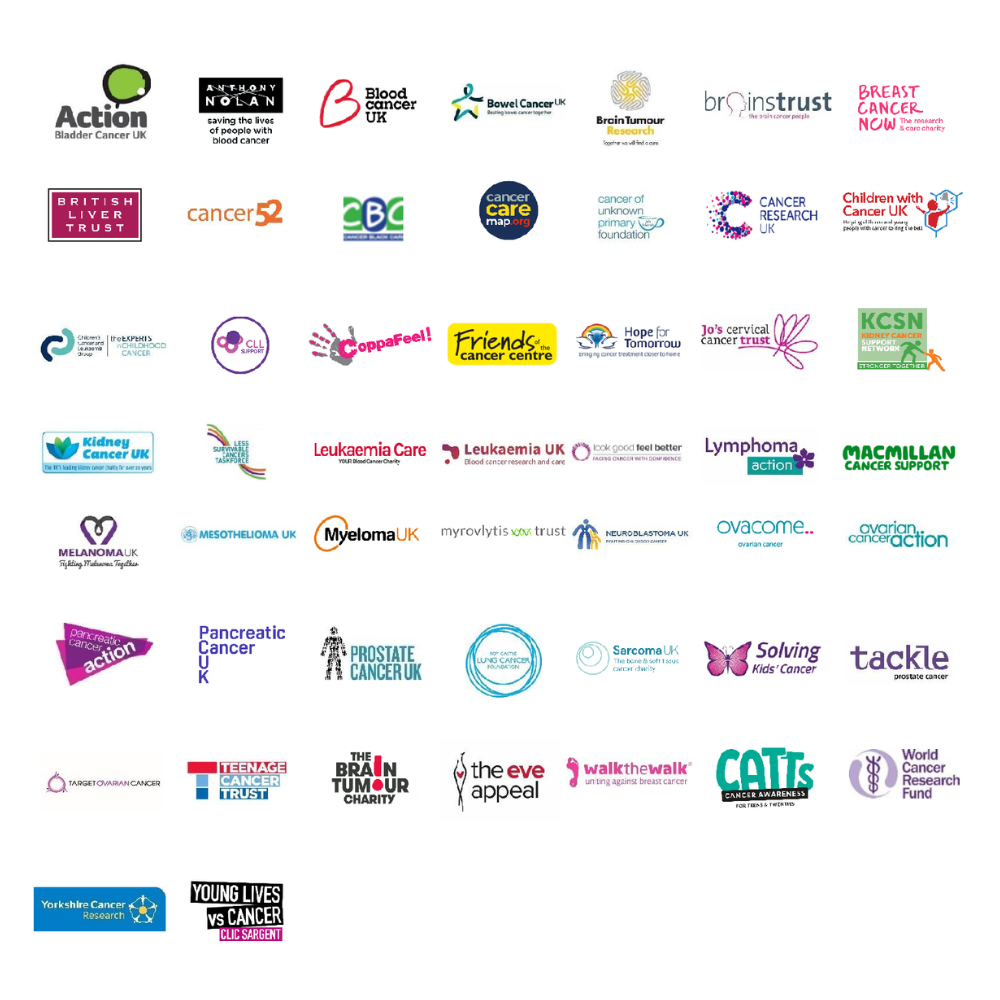 Working together for a stronger voice

This year saw us partnering effectively with both colleagues across the charity sector, and the NHS.

We worked with One Cancer Voice, a collaboration of charities and organisations, to send a united message from 51 cancer charities to the then Prime Minister, Chancellor of the Exchequer, and Secretary of State for Health and Social Care, urging them to use the upcoming Comprehensive Spending Review to urgently deliver Government commitments to improve cancer survival and care by growing the cancer workforce and investing in kit to meet patient need, levelling-up on cancer to address factors which mean poorer communities are hardest hit by the disease, and strengthening investment in cancer research and development.

Find out more about our work on changing policy and campaigning to the government to make real change for people affected by bowel cancer. 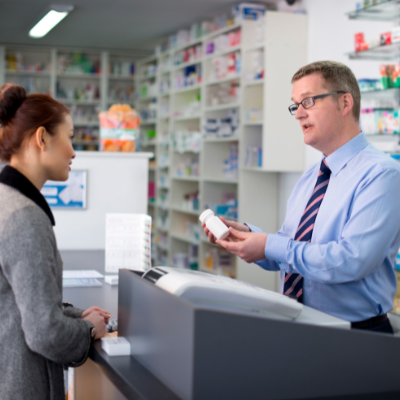 Our support for healthcare professionals in Wales, through our Moondance Foundation-funded activity, saw us launch a new online course about bowel cancer for community pharmacy staff, to help them feel more confident talking to people about the disease.

Read more about how we support healthcare professionals across the UK to ensure the highest possible standards of treatment and care for people with bowel cancer. 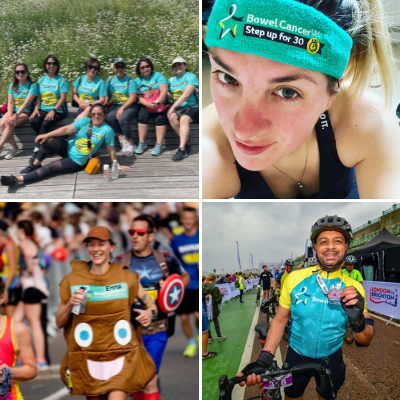 More than 10,500 individuals and 175 partners and institutions helped raise £5.3 million – the most ever raised in a single year.

'Step up for 30' was our flagship fundraising event during Bowel Cancer Awareness Month in April, raising an incredible £310,000 and far exceeding expectations. More than 600 'Walk Together' events took place across the UK, raising over £151,000. And our corporate partners and trusts helped raise 10% more than the previous year.

You make change happen. Every bake sale, run, corporate partnership and donation helps stop people dying of bowel cancer so thank you. Find out more about supporting us. 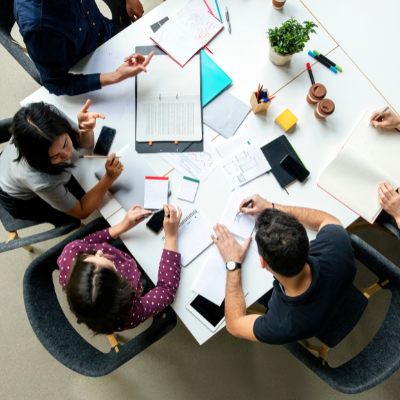 2021 was not only a record-breaking year for income, we also achieved stellar levels of awareness raising, support and influencing despite ongoing global health challenges. We're determined to build on last year's success to deliver even more. 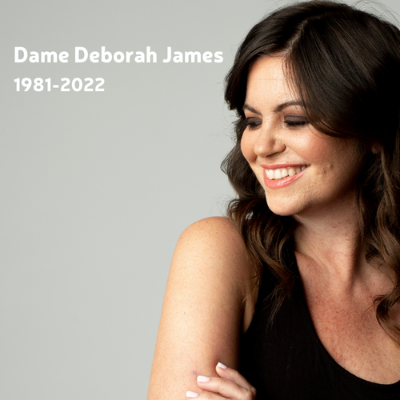 Dame Deborah was a formidable supporter of the charity who did so much to raise awareness of bowel cancer and make a difference to people affected by the disease, and we were deeply saddened to hear of her death.

She played a huge part at Bowel Cancer UK, working with us on issues affecting younger patients diagnosed with the disease, and raised tens of thousands of pounds, for which we will be forever grateful. We were absolutely delighted when she became a patron during Bowel Cancer Awareness Month in April 2021, after offering her support over the years since she was told she had bowel cancer.

We're truly grateful to have known Dame Deborah and to call her our friend. We'll miss her dreadfully. We're determined to ensure her lasting legacy by continuing to raise awareness of bowel cancer and its symptoms, pushing for earlier diagnosis of the disease, and ultimately, saving lives. 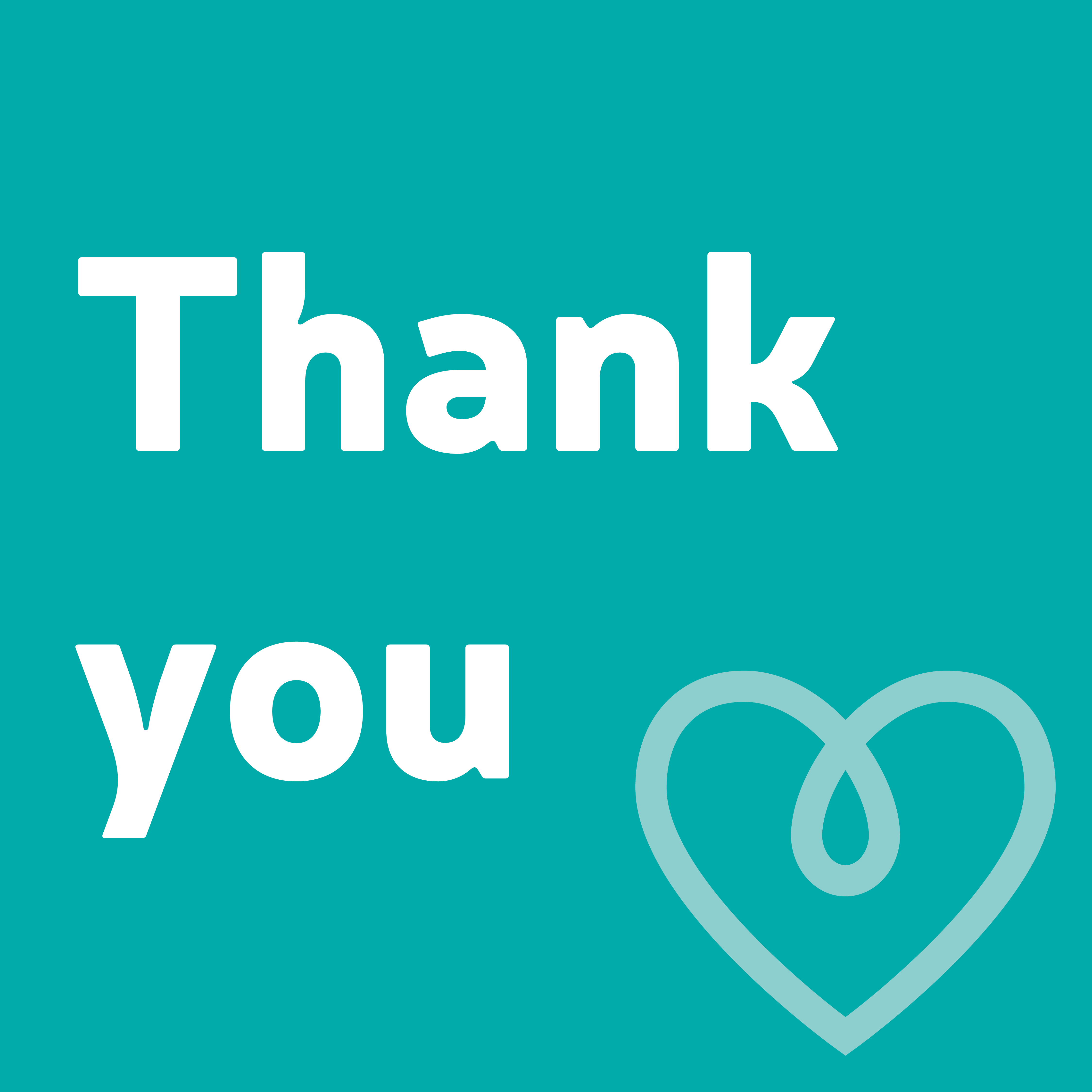 Thank you to our supporters

Here at Bowel Cancer UK we have always had people at the heart of everything we do. We know that together, we're stronger. To everyone who shared their story with the media, or policymakers, who reached out to support someone struggling to cope, campaigned with us, donated or fundraised for us – our heartfelt thanks to you all.

Read our Annual Review 2021 for more of our highlights.