365 days of boogying for bowel cancer

Lindsey Lovatt, 54, from Norfolk, is dancing for 30 minutes every day for a whole year to raise funds for the charity, and to show her support for her husband, Dr Peter Lovatt, who was diagnosed with bowel cancer in January 2021.

Peter is a dance psychologist and travels the world giving inspiring key-note presentations and sessions about the power of dance and movement on improving our lives in business, education and health and social care. He probably wouldn't have gone to the GP about the chest pains he was having, if it wasn't for lockdown, but once he was there they did a health MOT. It revealed that he had a tiny bit of blood in his stool, and taken together with his slight change of bowel habit, he was referred to have a colonoscopy. We weren't worried at all, cancer was the last thing on our minds.

As I was waiting in the hospital car park, I got a call from the consultant to say Peter had bowel cancer. Luckily it hadn't spread and he was offered surgery three weeks after. As a professional dancer, he's already fit and healthy but he increased his exercise during those three weeks so he would have the best chance of a quicker recovery post-surgery. The operation went very well, and they managed to remove the tumour through keyhole and he didn't need a stoma. Since then, he's been using dance and movement to help him recover. We're now just waiting to hear if he needs any further treatment.

Whilst Peter was in hospital recovering from surgery, I wanted to do something to support him and Bowel Cancer UK, as the charity has provided brilliant support and information to us. Although I've supported lots of family and friends with their fundraising, I've never done one myself but I knew that I wanted to do something that would benefit me – physically and mentally. I thought I could boogie for 30 minutes every day for a year. My mother-in-law mentioned that it was World Cancer Day in February, and I saw that was a good day to start, so I'm dancing every day until 4 February 2022.

My eldest son suggested that I set up a GoFundMe page and I've now raised over £1,000. I never thought it would raise so much money, and I've still got most of the year to go. I get a notification on my phone every time someone donates and it really inspires me to carry on, especially if they're complete strangers who don't know me or Peter. It amazes me that people we don't know have sponsored me. Everyone has been very generous.

I'm mixing up my dances to help me stay motivated. I've been doing a musical theatre workout (www.567Broadway.com), Zumba with a local teacher, local dance classes on Zoom (www.daytimefitnessclasses.co.uk), jazz dance exercise (@DollieHenry) and Darcey Bussell does a free cultural dance on Facebook (www.diversedancemix.com) so I follow that too. I'm trying to get my youngest son involved so we do the Diversity workout together which is hip-hop, or sometimes we put on the Nintendo Switch and do a Just Dance routine. I make sure I do a quick video of my doing it every day and then I post it on my Instagram (@lindseymlovatt) so everyone can see I've done it!

I'm really enjoying it so far and can already notice the benefits, I've lost a bit of weight and feel physically stronger. At the moment it's quite easy to fit in as I'm working from home, but I'm able to fit it into my routine. I want to get to a point that dancing for 30 minutes every day is part of my routine, and it's not a chore but something I do every day without thinking, like brushing my teeth.

I can't believe I have managed to complete my year long boogie. I have been doing all sorts of dance routines, workouts and classes and for me it has been a remarkable journey. I have raised well over £3,000 so far.

Peter is doing well. He has made a remarkable recovery from his surgery, it was a slow and steady progress and he used dance throughout his recovery. He made his first international trip a couple of days ago providing a keynote to a large audience. He now incorporates his cancer journey within his talk which is based on his Dance Psychology research, if You Move You Improve. He got a standing ovation with many responding to his cancer journey. He will obviously be under the cancer surveillance programme and we don't know what the future holds but he is currently doing well.

I found doing a boogie a day a real tonic to cope with life's ups and downs this year. Obviously we had Peter's treatment to cope with, alongside the second big COVID lockdown this time last year, so whilst Peter was recovering I was home-schooling my eight year old. My 23 year old came home for Peter's recovery period which was a real support and we have bonded so well as a family. My daily dance became a real feature in the household with everyone joining in periodically. I have also been part of regular dance groups all which have supported and joined in with being part of it. It has also helped me personally cope with my menopause symptoms this year, often when I least felt like waltzing around the living room it was the best thing to do. It has kept me supple and my mental wellbeing has been given a daily dance positive boost, I would recommend everyone to do it. I have put a little video of each daily boogie up on my Instagram account @lindseymlovatt.

My son and I have also created a little one min video which will go live on 4 February which is the last day to end my Boogie for Bowel Cancer Campaign.

Take on a challenge and help create a world where no one dies of bowel cancer. 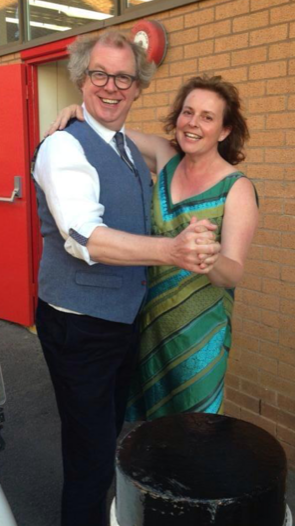 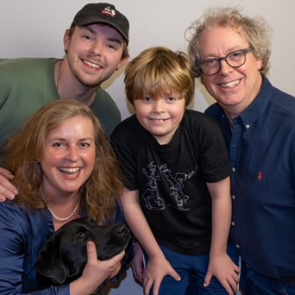