Working together to ensure the greatest impact

For Bowel Cancer Awareness Month in April this year, we launched our #thisisbowelcancer campaign shining a light on the varied and many people affected by the disease. Every 15 minutes in the UK, somebody is diagnosed with bowel cancer. But it doesn't just impact the person diagnosed. It affects millions of people across the UK, from families and friends, to doctors and nurses and scientists and researchers.

Bowel cancer is the UK's second biggest cancer killer, with over 16,000 people dying from it each year. Yet the disease is both treatable and curable, especially when it's diagnosed early. That's why we campaign to improve earlier diagnosis and access to best treatment and care for everyone affected by bowel cancer.

To have the greatest impact, we're working with people across the bowel cancer community. This includes working closely with organisations like the Royal College of Pathologists (RCPath) who play a vital role in the early diagnosis of bowel cancer.

The role of pathologists

Pathologists play a crucial role in the diagnosis and management of bowel cancer, both in overseeing testing and providing support to patients. If you have ever had a blood test or had a tissue sample taken, a pathologist will have been involved in your care. They were key in the development of the improved bowel cancer screening test, the faecal immunochemical test (FIT). They continue to lead on research into new and innovative cancer treatments.

However, a report by the RCPath found that only 3% of NHS histopathology departments (who are responsible for diagnosing disease) have enough staff to meet clinical demand. They also highlight that demand for pathology services has been increasing year-on-year. But this has not been matched with an increase in staffing levels and services are struggling to recruit to vacant posts as it can take up to 15 years to train a pathologist. 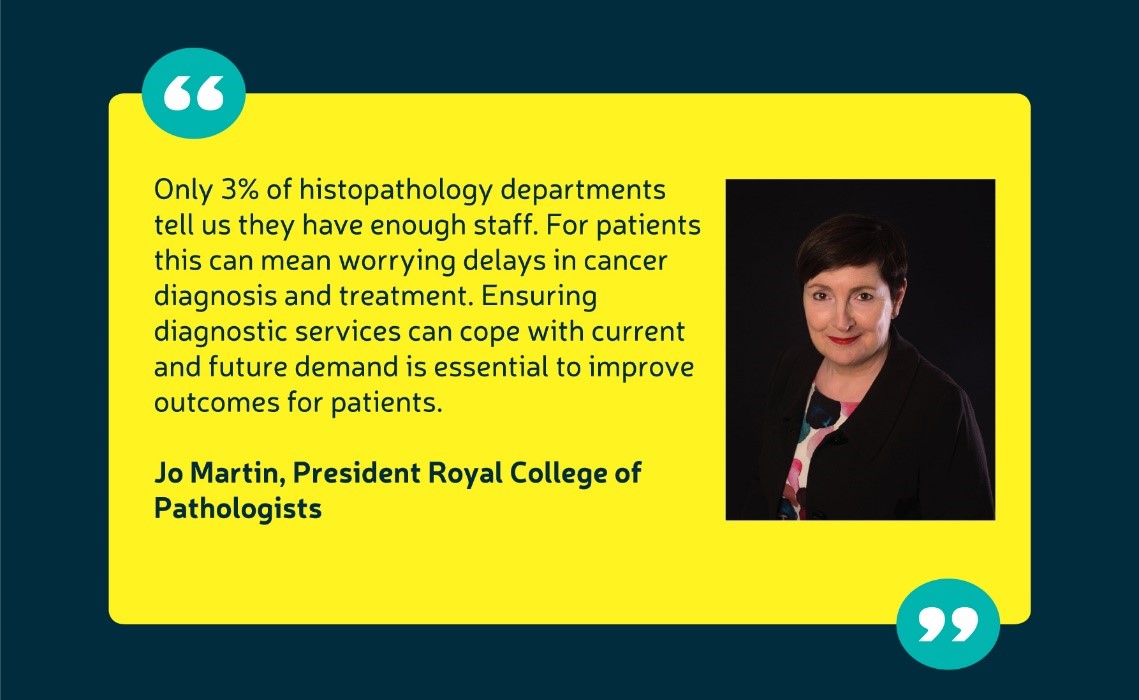 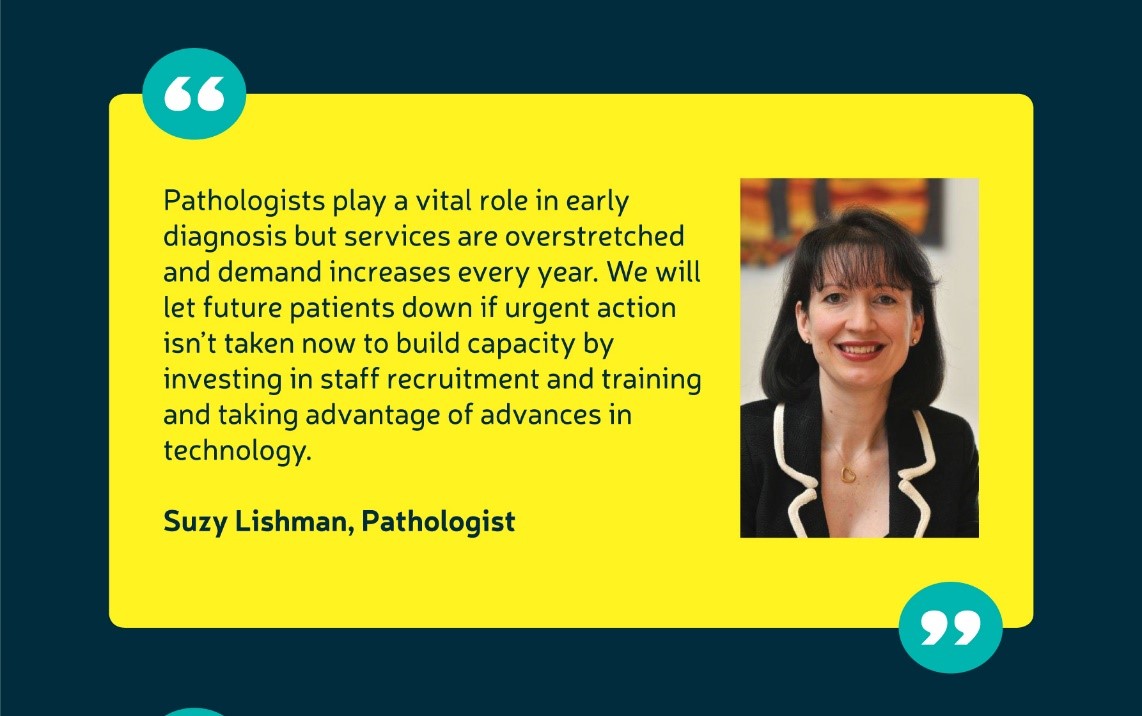 We work closely with RCPath to address challenges facing pathology services. We share the common goal of ensuring pathology services have the capacity they need to provide the best treatment and care to patients. We therefore share the concern that staff shortages in pathology services must be urgently addressed to safeguard the major and vital contribution they make to healthcare, particularly with regards to bowel cancer. This includes making sure there is a workforce in place to ensure the timely and sustainable introduction of FIT into the Bowel Cancer Screening Programme.

RCPath have helped us raise this concern as part of our #CapacityCrisis campaign. The current and previous President of the Royal College of Pathologists, Jo Martin and Suzy Lishman, provided us with quotes expressing their concern about the current capacity crisis.

Similarly, we’ve used RCPath’s statistics on workforce shortages in our messaging to highlight just how critical staff shortages are.

By working together, this lets the public know that these issues aren’t only important to us but to other organisations in health that have an important role in the diagnosis of and management of cancers as a whole.

The NHS Long Term Plan was ambitious and we support its drive, but without fully funded commitments to address workforce shortages, it’ll be difficult to see these ambitions come to light.  The Interim recommendations of the Workforce Implementation Plan is expected to be published by the end of April 2019. We hope to see specific actions to address issues in bowel cancer diagnostic services, such as pathology and endoscopy, to ensure patients have access to the best treatment and care.

The interim recommendations of the Workforce Implementation Plan, which has now been renamed to be the Interim People Plan was published in June 2019. It set out the immediate vision for England’s NHS staff in 2019/2020 to support the delivery of the NHS Long Term Plan. While we welcomed the broad ambitions of the plan, it did not outline specific measures to tackle staff shortages in NHS endoscopy and pathology services. We are therefore calling on the final plan, expected to be published later this year or early next year, to include commitments on this.