In March 2019, Jayne Bryant, Assembly Member (AM) for Newport West, became the first AM to pledge to become a Bowel Cancer Champion. In this blog she explains how she’s working with Bowel Cancer UK to improve early diagnosis of bowel cancer and raise awareness of symptoms – and particularly in younger patients who are more likely to be diagnosed late. This is following the loss of a fellow Assembly Member, Steffan Lewis, who was diagnosed with bowel cancer at the age of 33.

In January this year, the National Assembly for Wales lost one of its brightest stars to bowel cancer. The youngest Assembly Member, Steffan Lewis was diagnosed with stage four cancer in 2017, aged 33. Throughout his treatment, Steffan continued to make insightful and important contributions in the Assembly chamber. He also used his position to highlight the emotional toll of living with bowel cancer. Like so many others affected by the disease, Steffan’s family and friends now mourn the loss of a life brutally cut short.

With Steffan very much in mind, I am proud to be the first Bowel Cancer Champion in the Assembly. Since April, eleven fellow Assembly Members have also pledged to take on this role. Together with Bowel Cancer UK, we are determined to increase the number of AMs working in their constituencies to raise awareness of bowel cancer symptoms and particularly in younger people, raise issues relating to bowel cancer in the Assembly, and promote participation in screening.

More than 2,200 people are diagnosed with bowel cancer every year in Wales, making it the fourth most common cancer. It is also the second biggest cancer killer, with over 900 people dying from the disease each year. But this shouldn’t be the case as bowel cancer is treatable if diagnosed early. The best way to detect bowel cancer early is through screening, yet nationally across Wales, uptake of bowel screening was only 55% in 2018.

Worryingly, my home city of Newport has one of the lowest cancer screening uptake rates in Wales. Earlier this year, myself and my office staff became cancer screening champions after completing a training session led by Aneurin Bevan University Health Board and Public Health Wales. Improving the uptake of all free and potentially lifesaving screening programmes is vital.

Bowel Screening Wales (BSW) currently sends all men and women between the ages of 60– 74 a home test kit that looks for traces of blood in poo, every two years. Removing factors which deter people from participating in screening should be a national priority.

The Welsh Government recently announced changes to the  programme and  a new, more effective and easier to use screening test, the faecal immunochemical test (FIT), is currently being rolled out in Wales. The simpler, more sensitive test has been available in Wales since January 2019. This test has the potential to detect twice as many cancers than the previous screening test. In addition, findings from Scotland, where the FIT test has been in place for longer, has demonstrated it significantly increases uptake into the screening programme. In addition, last year the Welsh Government also announced that the bowel cancer screening age will be reduced from 60 to 50. Thus far, Scotland is the only UK country that is screening 50 – 74 year olds. These are significant steps forward to improving early diagnosis, something which is key to facilitating successful treatment.

Since becoming a Bowel Cancer Champion, I’ve spoken with and listened to a number of people affected by the disease. Noticeably, I’ve been contacted by people highlighting that you are never too young to have bowel cancer. Among those who’ve got in touch with me was a man diagnosed with stage 3 cancer at the age of 38. Following operations and chemotherapy, he was given the all clear. The mother of a 28 year old about to embark on chemotherapy also asked that I publicise the importance of young people understanding symptoms of the disease. Determined to help others in a similar situation, she offered to share her experience of the impact a bowel cancer diagnosis can have on family life.
By bringing people together, such as patients and families, doctors and nurses, scientists and politicians, we can create a future where lives are not lost to bowel cancer. 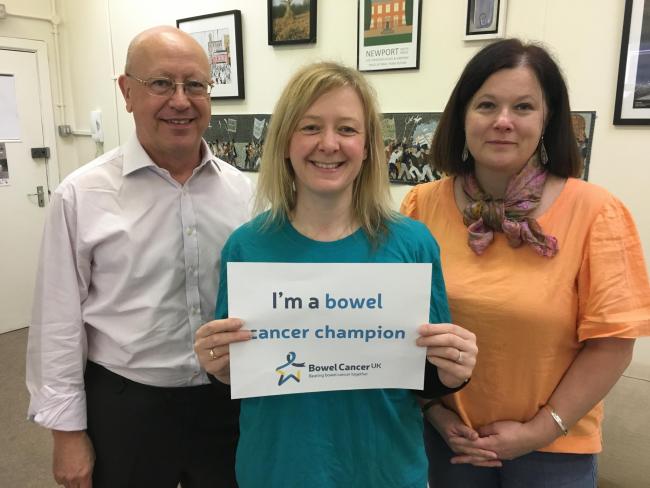