Time to Test for Lynch syndrome - Our week of action

We want a future where no-one dies of bowel cancer and we know more people will survive the disease if those at high risk are identified. That’s why this week we’re taking our petition to No. 10 Downing Street and Governments in Scotland and Northern Ireland to tell them - it’s time to test for Lynch syndrome.

This genetic condition significantly increases a person’s risk of developing bowel cancer and at a much younger age. Yet too few people know they have it as they simply aren’t being tested. As part of our Never Too Young campaign, we're working to change this to ensure more lives are saved from bowel cancer. Find out what we’re up to during our week of action with daily updates on this blog.

Our Time to Test for Lynch syndrome week of action was a great success and we wanted to share with you the highlights from our petition hand in events in Edinburgh, London and Belfast.

We now hope to receive a positive response to our petition from the Government and Health Ministers in Scotland and Northern Ireland and will keep working to make sure everyone in the UK is tested for this life saving test.

We’re reached day four of our week of action and it’s our final petition hand in event. We’re in Belfast taking our petition to the Department of Health at Stormont. We were joined by Members of the Legislative Assembly, people affected by Lynch syndrome and supporters of the campaign. Richard Pengelly, the Permeant Secretary, kindly accepted our petition in the absence of a Health Minister. 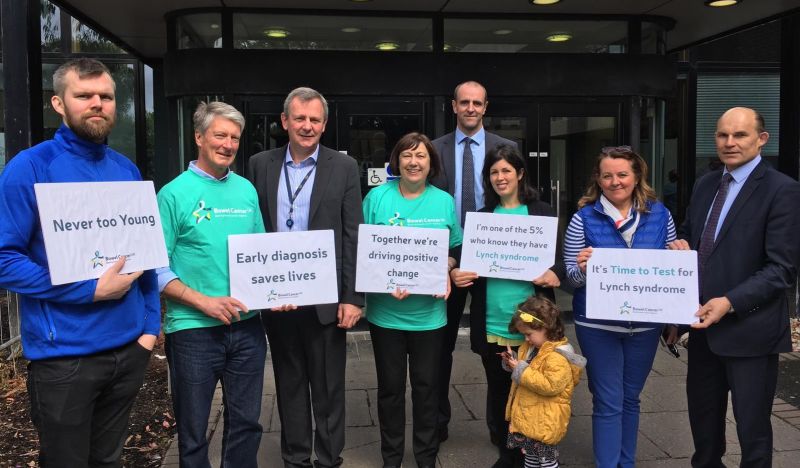 The Department of Health in Northern Ireland are responsible for reviewing National Institute for Health and Care Excellence (NICE) guidance that states all bowel cancer patients should be tested for Lynch syndrome at diagnosis. It will then make decisions on whether this guidance should be endorsed for use in the nation. The Department of Health must complete this review as a matter of urgency and work with health bodies to ensure hospitals have the funding and staff to carry out this test across Northern Ireland.

We have now taken our petition to Governments in Scotland, England and Northern Ireland. Thanks to everyone who signed our petition or attended our events. We couldn’t have done it with you!

Our petition has been handed over, but the campaign isn’t over until all bowel cancer patients are tested for genetic conditions, like Lynch syndrome, that leave people at high risk of developing the disease. We’ll continue to campaign in all four nations of the UK so join us as a campaigner today to help improve the treatment and care of everyone affected by bowel cancer.

On day three of our week of action, we were at No.10 Downing Street taking our 10,000 strong petition to the Government. We gathered outside the gates of Downing Street with our Chief Executive, Deborah Alsina MBE, the President of The Royal College of Pathologists, Professor Jo Martin, and people affected by Lynch syndrome, before heading towards the famous black door to hand over this important petition.

Members of Parliament from across the political divide have also supported this campaign over the last year and have provided words of support. Together, we want the Government to know it can stop generations of families being devastated by bowel cancer due to this genetic condition. 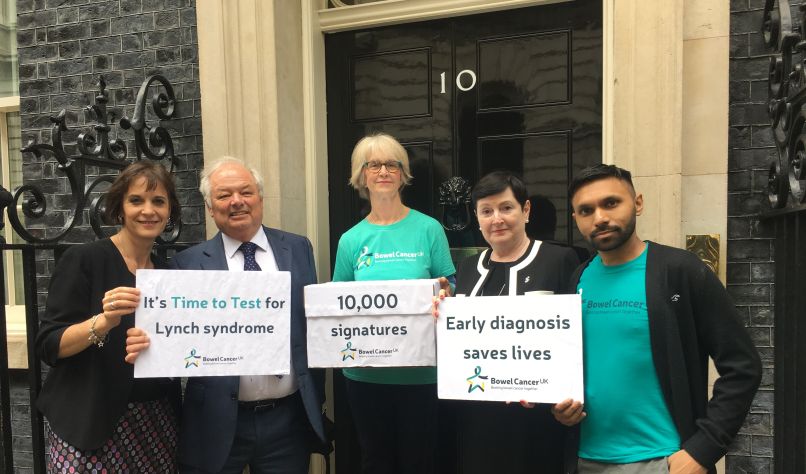 We welcome the Government’s bold ambition to improve genetic testing in the NHS in England and are excited about the potential for this to improve the early diagnosis and treatment for those at high risk of cancer. But despite the clear benefits of testing for Lynch syndrome, there is still wide variation, with many bowel cancer patients not being tested. This has to be addressed.

As well as taking our petition to the Prime Minister, we’ve also sent it to the Secretary of State for Health and Social Care, Matt Hancock MP, and the Minister for Cancer, Seema Kennedy MP, to ask them to ensure variation in Lynch syndrome testing is addressed within their roles at the Department of Health and Social Care.

We’re now looking forward to our final hand in event tomorrow at Stormont in Northern Ireland to make sure everyone in the UK is able to access this life saving test.

Our Time to Test petition is now closed and today we’re taking our 10,000 signatures to the Scottish Parliament, Holyrood. Our Head of Scotland, Claire Donaghy, and supporters of the campaign are shining a light on thousands of people with Lynch syndrome who are in the dark, unaware that they are at high risk of bowel cancer and could pass it onto their children. Thank you to everyone in Scotland who supported our campaign.

One of our supporters, Cath, kindly joined us at Holyrood to hand over our petition to the Department of Health. Cath has Lynch syndrome and she tells us ‘Several members of my family have had bowel cancer and in 2008 I was also diagnosed with the disease. I do wonder that if my family had been tested for lynch syndrome when they were first diagnosed, that I would have been more aware of the disease. It may have meant that my cancer was caught at an earlier stage.’

It’s positive that around half of the health boards in Scotland have expanded testing to all bowel cancer patients. This must now be rolled out to all health boards without delay to ensure everyone is with Lynch syndrome is identified and can be regularly monitored, giving them the best chance of survival if diagnosed with bowel cancer. We hope to receive a positive response to our petition from Jeane Freeman MSP, Cabinet Secretary for Health and Sport.

Tomorrow we take our petition to No.10 Downing Street to ask the Government to step up and help stop generations of families being devastated by bowel cancer due to Lynch syndrome.

Today, we’re celebrating that Wales recently committed to test all bowel cancer patients at the time of their diagnosis for Lynch syndrome - the first country in the UK to do so. This comes after years of campaigning, in partnership with expert clinicians, scientists and campaigners who have worked tirelessly to drive this positive change.

From June 2019 local health boards will follow National Institute for Health and Care Excellence (NICE) guidance to test for Lynch syndrome. We’re delighted that people diagnosed with bowel cancer and their families will be tested so that those identified can access life-saving interventions to reduce their chance of dying from bowel cancer, like regular colonoscopies. The Royal College of Pathologists and Lynch Syndrome UK have kindly supported our Time to Test campaign.

This is a critical step towards saving more lives from bowel cancer in Wales. It is vital this is implemented without delay.

Keep an eye out tomorrow as we take our petition to the Scottish Parliament to tell the Health Minister - it’s time to follow Wales’ lead and test all bowel cancer patients and their families for Lynch syndrome.

Join in and campaign for change 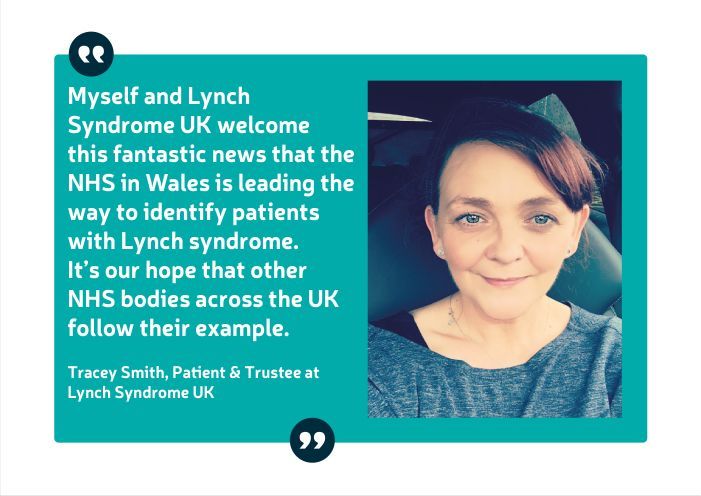 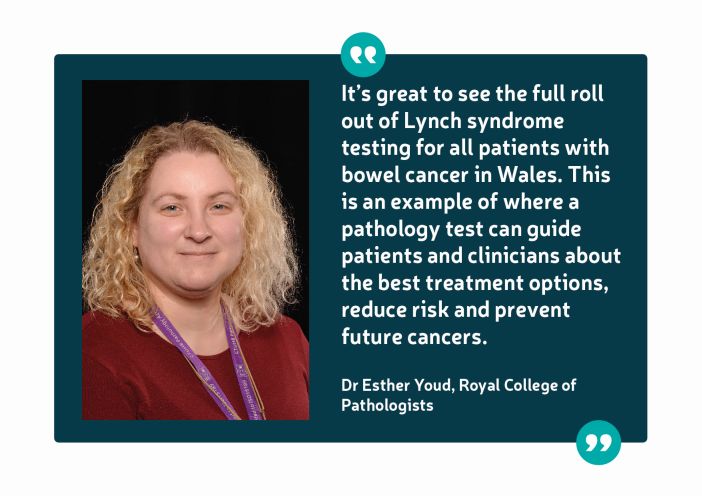 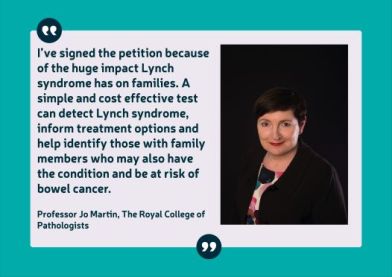