More testing is good news but we need to do more

Like any Dad, I’d do anything for my children but when one of them is taken away from you at a young age, and there is nothing you can do, it’s hard to deal with.  I still miss Stephen every single day.  He was a remarkable young man who became a household name, raising millions for charity after inspiring people through his positive attitude to illness.  Inspirational until the end, he died at the age of 19 of bowel cancer just over two years ago in May 2014.

Like me, Stephen had a genetic condition called Lynch syndrome, which meant he had a high risk of developing bowel cancer.  It’s not something many people have heard of but I know now that Lynch syndrome is responsible for around one in 12 cases of bowel cancer in people aged under 50.

If I had been genetically tested after the first diagnosis and given regular surveillance screening, it might have been possible to have prevented bowel cancer developing second time around, which would have been welcome as the second diagnosis was a terrible shock and the treatment much harder than the first time.

I noticed Stephen wasn’t well when he was 15 and, as his symptoms continued, he must have gone to the doctors about five times and the hospital on three or four occasions.  We kept telling them about my Lynch syndrome diagnosis, but it was totally dismissed, everyone thought that Stephen was too young to get bowel cancer and you want to believe what you’re told by the medical profession, yet everyone now knows how wrong we all were.   The fact that there was a diagnosis of Lynch syndrome in the family should have led to bowel cancer being ruled out first not last in Stephen’s case.

That’s why I’m supporting Bowel Cancer UK and their Never Too Young campaign, to raise awareness of Lynch syndrome and to ensure better diagnosis and treatment for people under the age of 50 who are at higher risk of developing the disease.

It’s vital that every single person under 50 who is diagnosed with bowel cancer is offered testing for Lynch syndrome.  So I was pleased to hear that 110 out of 156 hospitals in the UK are now doing this, 46 per cent more than last year, as shown by a FOI request sent by Bowel Cancer UK to all UK hospitals.

But I’d like to see every hospital in the UK test people under 50 who are diagnosed with bowel cancer for Lynch syndrome.  And it needs to be done at diagnosis, as I know all too well how long it can take to get the results.

I’d also welcome the test being done throughout the UK automatically for people under 50, rather than just over half of UK hospitals, we need a consistent approach to treatment and care for everyone.

It’s a conveyor belt, you know that it’s going to be another family next week who will affected by bowel cancer.  That’s why I’d like to make a difference, anything I can do to help ensure other families don’t go through the same experience as mine would be a good thing.

If you’d like to help too, join Bowel Cancer UK’s Campaign Supporters’ network, donate to support their work or simply find out more by visiting bowelcanceruk.org.uk. 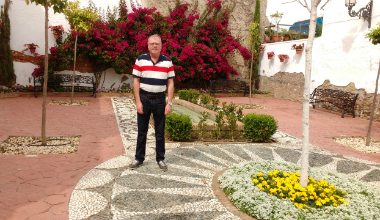