At Bowel Cancer UK, our vision is a future where nobody dies of bowel cancer. That’s why we work together with people affected by the disease, clinicians and researchers to campaign for early diagnosis and access to the best treatment and care across the UK. With their help we identify the biggest challenges facing people affected by bowel cancer and work to influence health decision makers and politicians to make the best possible policy and legislation for people with, or at risk of, the disease. In this blog, we discuss the different ways the Policy and Campaigns team influence to ensure we’re having the greatest impact.

Some of our main areas of work include:

We raise issues that really matter to people and propose policy changes that are based on robust research. How we go about influencing will vary depending on the issue itself and who we’re trying to persuade. This could involve mobilising public support to show the scale of the problem and put pressure on those who make the decisions to take action to fix it. Or it could be through less-public channels, such as meeting with decision-makers to discuss issues and propose practical and evidence-based solutions.

The first step to influencing

In order to influence the development of new policies, guidelines and programmes, or change existing policy, it’s important that the issues we campaign on specifically impact people affected by bowel cancer and our recommendations are based on robust evidence. That’s why we engage with and hear from people affected by the disease to help us identify the big challenges, and work with clinicians and researchers to pull together the evidence to back-up the change we’re calling for and develop solutions. Once we’ve identified a problem and pinpointed solutions we’d like to achieve, we look into who has the power to make decisions that will address the problem.

Working behind the scenes

Where possible we look to drive change first behind the scenes through building relationships with decision-makers and by providing evidence and patient experiences. This can involve sitting on expert groups to support their work or be a ‘critical friend’; meeting with policy makers; providing policy reports; or inputting into public consultations. To ensure our calls to action are robust and evidence-based, we consult with both our Medical Advisory Board who are experts in the bowel cancer field, and we involve patients so that their priorities for change are addressed.

For example, with the help of expert clinicians and hundreds of patients who shared their experiences we highlighted our priorities for bowel cancer to NHS England in a public consultation on the NHS Long Term Plan, published in January 2019. It helped to ensure improvements to bowel cancer services were included in NHS England’s long term vision for health.

As many key decisions about healthcare are made by the government and the Department of Health and Social Care, we aim to build close working relationships with politicians, civil servants and policy advisers to influence the development of policy. This may involve meeting directly with politicians to discuss how we can work with them in their constituency and nationally. They can help raise issues impacting people affected by bowel cancer by asking questions or hosting debates in parliament, contacting their local hospitals to enquire about services or writing to relevant Ministers.

With the help of our campaigners, we’ve built a network of over 100 bowel cancer champions in Parliament, the National Assembly for Wales and the Scottish Parliament. A bowel cancer champion is a politician who pledges to support our campaigning work nationally or locally. Building this network of politicians helps us to influence health policy developed in government. You can find out about how one of our champions, Welsh Assembly Member for Newport West, Jayne Bryant, is working with us to save more lives from bowel cancer in a recent blog here.

There are times when influencing behind the scenes isn’t possible to drive the necessary change on its own. To really highlight the scale of an issue, we may then need to influence through mobilising the public to put pressure on decision-makers such as Health Ministers to tackle an issue. For example, in 2018 we supported Lauren Backler to hand in a petition to lower the screening age in England from 60 to 50. Nearly half a million people signed this petition, as screening from 50 is crucial to diagnosing people earlier when the disease is treatable and even curable. This public pressure, alongside a new recommendation from the UK National Screening Committee to screen from the age of 50, helped to enable England and Wales to publicly commit to lowering the age. Subsequently, NHS England reaffirmed this commitment in their Long Term Plan giving us further leverage to call for a planned timeframe to implement this change.

There are a range of ways people can support a campaign to influence decision makers – sign a petition, write to a political representative or even tweet in support of a campaign. This not only lets the public know about issues that are important to us and those affected by bowel cancer but it can also motivate them to speak out and join us in leading change. The more people that get involved and act, the more chance we have to create lasting change. You can find out more about campaigning in a previous blog here.

We want a future where nobody dies of bowel cancer. By bringing together patient experiences and working with clinical experts on key issues facing bowel cancer, we’re working hard to save lives and improve the quality of life for everyone affected by the disease. Whether we’re influencing behind the scenes or mobilising our fantastic campaigners, we aim to drive positive change for all those affected by bowel cancer. 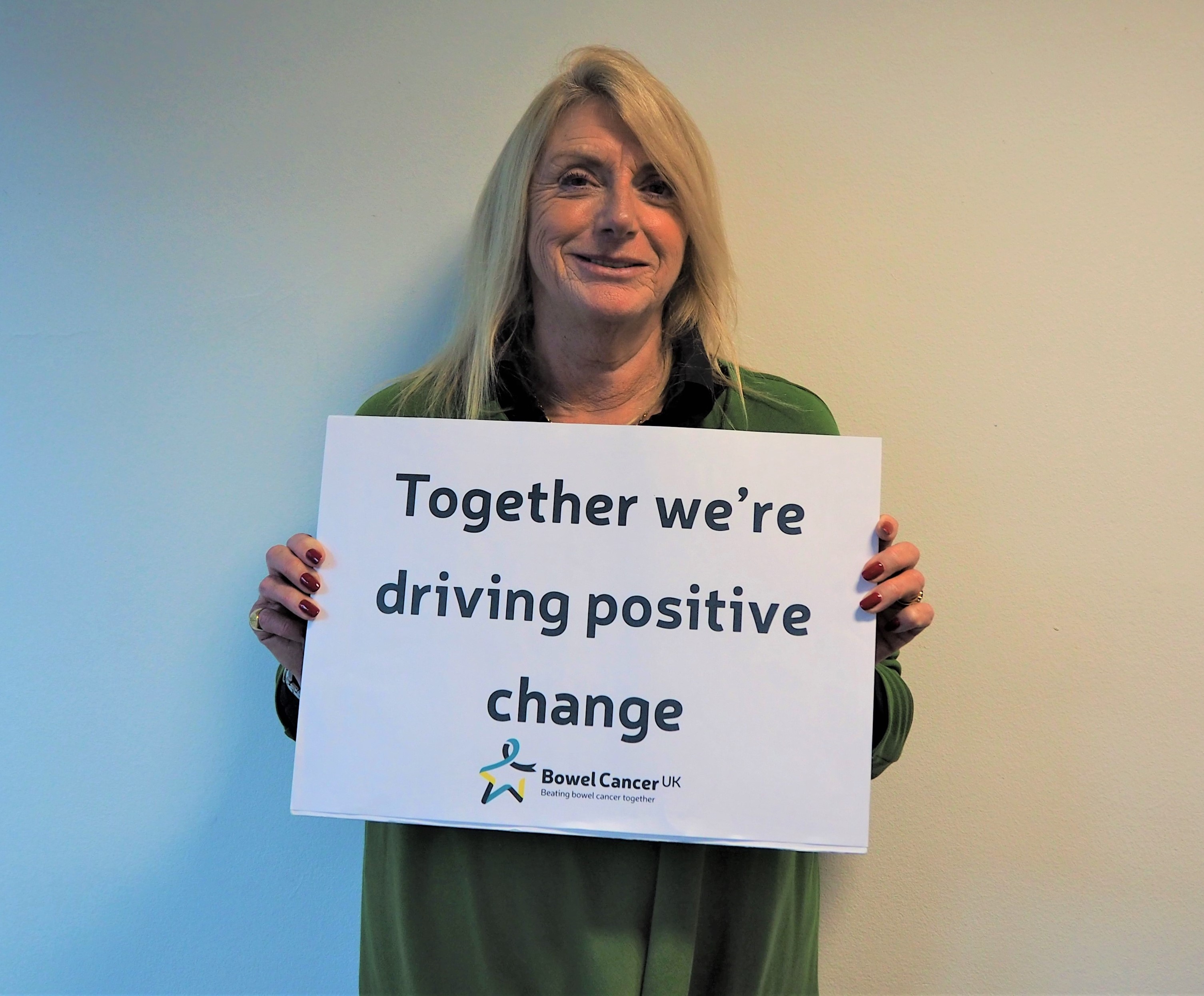