Zorb on the River Lagan for Bowel Cancer UK

Take part in an exciting fundraising challenge. Zorb up the River Lagan in a bubble on Sunday 12 March 2017 and raise vital funds for Bowel Cancer UK.

Each team of two or four will have their own zorb bubble. You will battle it out against the clock and the team with the most number of rotations wins. No previous experience is required, and with parental permission you can be as young as eight to take part, and commit to raise £50 for Bowel Cancer UK, the UK’s leading bowel cancer research charity.

Niamh McDaid, Senior Health Promotion & Training Officer for Northern Ireland at the charity said, “Go on, join us for this adventurous challenge, which will bring out your competitive streak!  You’ll receive your very own fundraising pack and we’ll support you every step of the way. The money raised from this daring day out will support vital research and lifesaving work to stop bowel cancer.” 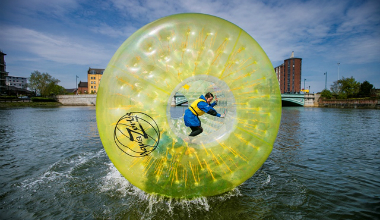