We're delighted to be working with ITV's Lorraine on the No Butts campaign, launched today during Bowel Cancer Awareness Month.

Fronted by our newest patron, Deborah James, this important campaign will raise further awareness of the symptoms for bowel cancer – the UK's second biggest cancer killer – during one of the nation's favourite breakfast shows.

On this morning's show Deborah told presenter Lorraine Kelly: "I was diagnosed at the age of 35 with stage 4 bowel cancer. It was the last thing I'd ever thought would happen. My cancer was caught really late and unfortunately the chances of survival plummets. It's really hard when I look at my kids – I've got a 13-year-old and an 11-year-old, I wonder if I'll ever get to see them make 18 and I probably won't."

She added: "All I want is to have a future and dream about a future. I want to make it to my 40th birthday at the end of the year, I want to have a huge party. I want to be a 40-year-old – not Deborah with cancer."

Lorraine and Deborah – along with Dr Hilary Jones – kicked off their mission by broadcasting outside Television Centre sitting on a bespoke pink 'No Butts' sofa. The roaming sofa will travel the nation over the next few weeks, as Deborah takes to the road and invites people – including some famous faces – to take a seat and get talking about bums and bowel habits.

Talking about the campaign, Deborah told Lorraine: "It's all about getting bums on seats to smash the poo taboo. There should be no embarrassment when it comes to talking about our bowel health. Ultimately, by doing it, we want to save lives."

She added: "We shouldn't be embarrassed – even our favourite celebrities poo. We should talk about it."

Over the coming weeks, Lorraine will feature a series of films highlighting the signs and symptoms, as well as sharing the stories of those living with bowel cancer. Lorraine will also be joined by guests including our patron Loose Women anchor Charlene White, who will be discussing how her mum died from the disease at the age of 47, and presenter John Stapleton, whose wife and fellow TV host Lynn Faulds Wood founded the charity Beating Bowel Cancer, which merged with Bowel Cancer UK in 2018.

Genevieve Edwards, Chief Executive at Bowel Cancer UK, said: "We're thrilled to be working with ITV on the 'No Butts' campaign and grateful to Lorraine for helping to raise important awareness of bowel cancer. It's the UK's second biggest cancer killer but it's treatable and curable, especially when diagnosed and treated early – so it's really important that people know the symptoms to look out for and to visit their GP if they're concerned."

The show has also created a 'No Butts' reminder sticker to highlight the warning signs and encourage early diagnosis. This will appear wherever people 'park their bums' across the country including SCS stores and delivery fleet, Welcome Break service stations, the Stadium of Light football venue and National Express coach stations.

Dr Hilary told Lorraine today: "We want everyone to become mini doctors in a way by learning these very few simple main symptoms."

He added: "Forget the embarrassment, it's part of your body – your bowel and our bowel habits are very important. They keep us healthy, so talk about it in a serious way and if you're worried, go and see your doctor."

Serious Tissues are also placing the sticker on their sustainable toilet roll boxes, while Victorian Plumbing are adding a 'No Butts' banner to their website which will be visible to anyone searching for toilets.

Lorraine Kelly said: "No Butts is all about raising awareness of bowel cancer and the signs and symptoms, as well as normalising talking about it. It's about making sure people don't die of embarrassment. I'm so pleased to be working with Deborah James on this campaign, she's a wonderful woman and an incredible ambassador. I am sure Lorraine viewers will embrace our 'No Butts' campaign, take up this cause and make sure that the word gets spread far and wide."

Deborah James said: "I was over the moon to be asked to team up with Lorraine on the 'No Butts' campaign. Since the early days, she has been one of my biggest supporters, and I'm so happy to use her amazing platform to spread awareness about bowel cancer. We know bowel cancer is curable if it's detected early and if we save just one life with this campaign, it's all worth it."

Steve Carson, CEO of ScS, said: "We're so proud to be supporting ITV's No Butts campaign to help raise awareness of bowel cancer across the UK. Knowing the symptoms and getting checked as early as possible is vital for battling this awful disease, and our research suggests many can't identify the signs. We hope our combined efforts help people to recognise the warning signs and encourage getting checked early."

Chris Baker, Co-Founder of Serious Tissues, said: "When Lorraine asked us to get involved with the 'No Butts' campaign, we were only too happy to oblige. We firmly believe that even toilet paper can be a force for good in the world, which is why we plant a tree for every roll we sell to help tackle climate change and deforestation. So, if we can also do our bit to encourage people to pay attention to the campaign and check for signs when they're sat on the toilet, hopefully it will help save a few people's lives too." 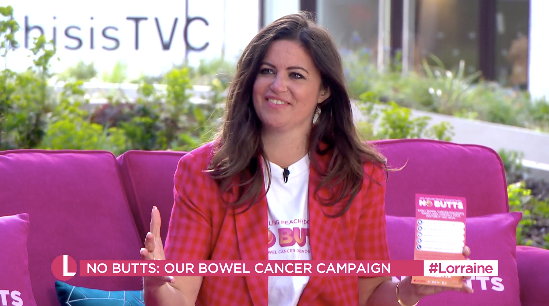 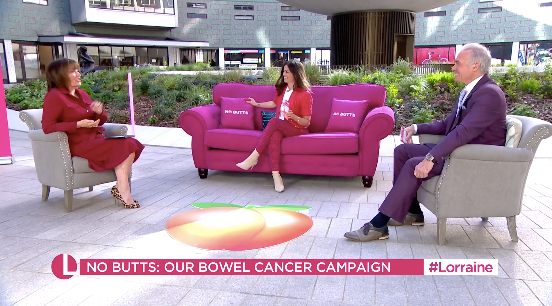 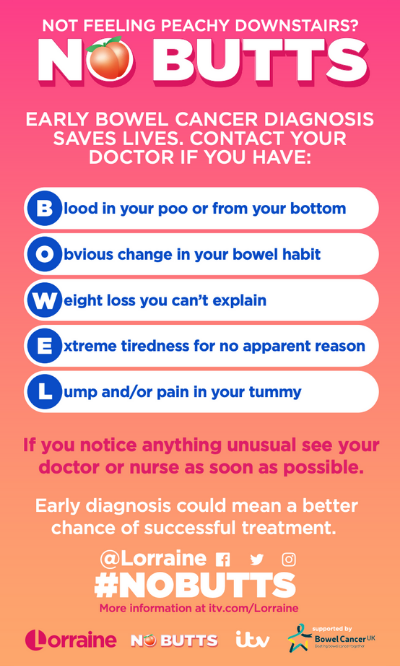