We've partnered with leading British retailer Marks and Spencer to raise awareness of the disease and its symptoms among the store's 30 million customers.

The partnership will see the charity's logo and symptoms infographic on packs across M&S' entire toilet roll range from September. Customers will be able to scan a QR code taking them through to the Bowel Cancer UK website to find out more.

The move is designed to help save lives by aiding early detection. Bowel cancer is the fourth most common cancer in the UK and the second biggest cancer killer. Nearly 43,000 people are diagnosed with bowel cancer every year in the UK however the disease is treatable and curable especially if diagnosed early.

M&S is also introducing new signage about bowel cancer symptoms in-store and across support centre toilets from next month.

The idea originated from M&S employee Cara Hoofe, who submitted the idea via the retailer's colleague suggestion scheme, Straight to Stuart, last week.

Cara, a Bowel Cancer UK supporter who was diagnosed with stage 4 bowel cancer in 2016 at the age of 32 years, was inspired to put forward the idea by the amazing fundraising and campaigning efforts of Bowelbabe Dame Deborah James, a patron of the charity.

Cara Hoofe, M&S Clothing and Home team, comments: "Deborah is a huge inspiration to me and so many other young people diagnosed with bowel cancer. I feel fortunate my journey since diagnosis has taken a different path but I want to give a voice to all those who can no longer use theirs to raise awareness. Early detection is so important and my main message to people is don’t feel embarrassed, get things checked out and speak to your doctor. I've worked at M&S for over ten years and am so happy they are putting my idea into action and so quickly – I'm hoping other companies will consider joining us."

Alongside awareness-raising efforts, M&S has also made a generous donation to Bowel Cancer UK to help us in our mission to save lives and improve the quality of life of everyone affected by bowel cancer.

Bowel Cancer UK together with M&S are calling on other retailers to also introduce updated toilet roll packaging, to help raise awareness of symptoms among as many people as possible.

Genevieve Edwards, Chief Executive of Bowel Cancer UK, said: "We are delighted to partner with M&S to raise vital awareness of bowel cancer symptoms with people all over the country. It's the UK's fourth most common cancer, with someone diagnosed with the disease every 15 minutes in the UK.

"Bowel cancer is treatable and curable especially if diagnosed early, but 60% of people are diagnosed at later stages when it is much more difficult to treat. Part of the problem is low awareness of the red flag symptoms of bowel cancer that should prompt people to contact their GP.

"This brilliant initiative will help millions of people across the UK know what to look out for and will undoubtedly save lives. We're incredibly grateful to Cara and the team for their commitment to making this happen."

Stuart Machin, CEO at M&S, said: "It's hugely rewarding to be able to put such a fantastic suggestion into action in my first week in the job. Cara's idea will undoubtedly help to save lives and by working with Bowel Cancer UK we can get the message out there to check for symptoms and if you have any concerns, to contact your doctor. This is exactly what Straight to Stuart is going to be about, harnessing simple ideas from colleagues that have a massive impact. Most importantly, this is a real opportunity to raise awareness across the UK and make a difference. I'm asking all retailers to join us – the more people we reach, the more lives we can potentially help save." 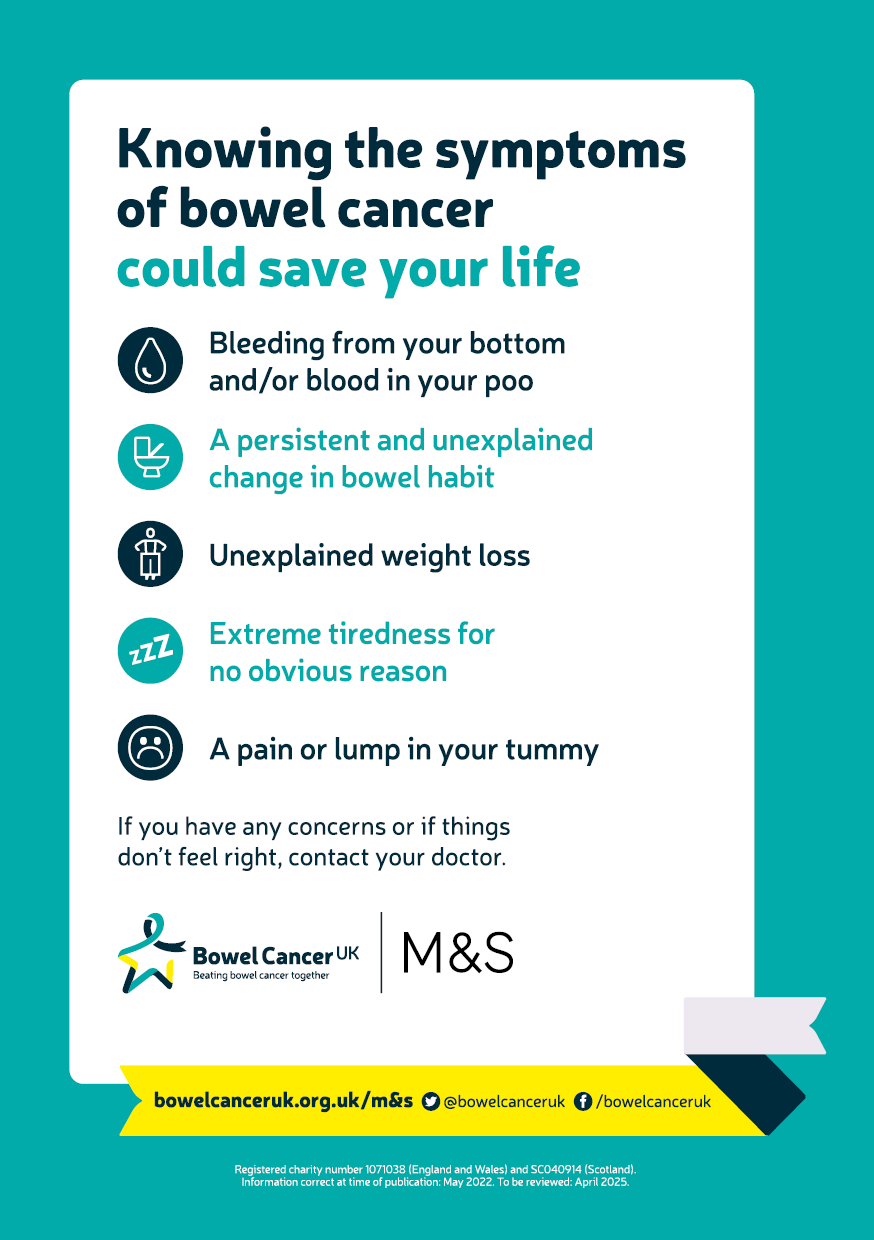