We hand in Lynch syndrome petition to UK governments

This week we hand in our Time to Test petition to England, Scotland and Northern Ireland governments signed by nearly 10,000 people. Together with our campaign supporters and patients we are calling on them to test all bowel cancer patients for Lynch syndrome at the time of their diagnosis.

Similar to the BRCA gene for people with a high risk of breast cancer, Lynch syndrome is a genetic condition that increases your lifetime risk of bowel cancer to up to 80%, as well as many other cancers including ovarian, stomach, and womb cancer. An estimated 200,000 people have Lynch syndrome in the UK – roughly the population of Gateshead. The majority of people (95%) with this genetic condition do not know they have it because of a lack of systematic testing.

As well as an increased risk of bowel cancer, people with Lynch syndrome are also more likely to develop bowel cancer at a much younger age – the average age of diagnosis is 45 years old – and they’re also at a higher risk of a recurrence.

As this genetic condition can affect treatment options for bowel cancer, identifying Lynch syndrome in bowel cancer patients will ensure they are offered the right surgical and drug treatments they are likely to respond well to, without adverse reactions.

As it is an inherited faulty gene, there is a 50 per cent chance that those with Lynch syndrome will pass it on to their children. Identifying it in those already diagnosed with bowel cancer, means family members who may also have the condition can be tested and benefit from regular screening including colonoscopy.

Last year our Freedom of Information request revealed that only 17% of UK hospitals were testing all bowel cancer patients and their family members for Lynch syndrome as per the latest NICE guidance, citing financial reasons, staff resources and policies as the main barriers.

Following on from this campaign, in partnership with NHS Wales, the Wales Cancer Network and the All Wales Medical Genetic Service announced a national system of testing all bowel cancer patients at the time of their diagnosis for the genetic condition from this month (June 2019) – the first country in the UK to commit to do this.

Deborah Alsina MBE, Chief Executive of Bowel Cancer UK, says: “We are incredibly grateful to everyone that signed this important petition and supported us to hand it in this week. We’ve been ringing the alarm bell for many years now that patients diagnosed with bowel cancer must be tested for Lynch syndrome at the point they are diagnosed with the disease. It’s encouraging that Wales is the first UK nation to commit to this, and we hope the other nations will swiftly follow their lead.

“By committing to test for this genetic condition in line with clinical guidance, the governments in England, Scotland and Northern Ireland will be helping to identify those at high risk of the disease and this will help save lives in the future. Until this is addressed, generations of families will be devastated by bowel cancer and lives will be needlessly lost to a disease that is treatable and curable.” 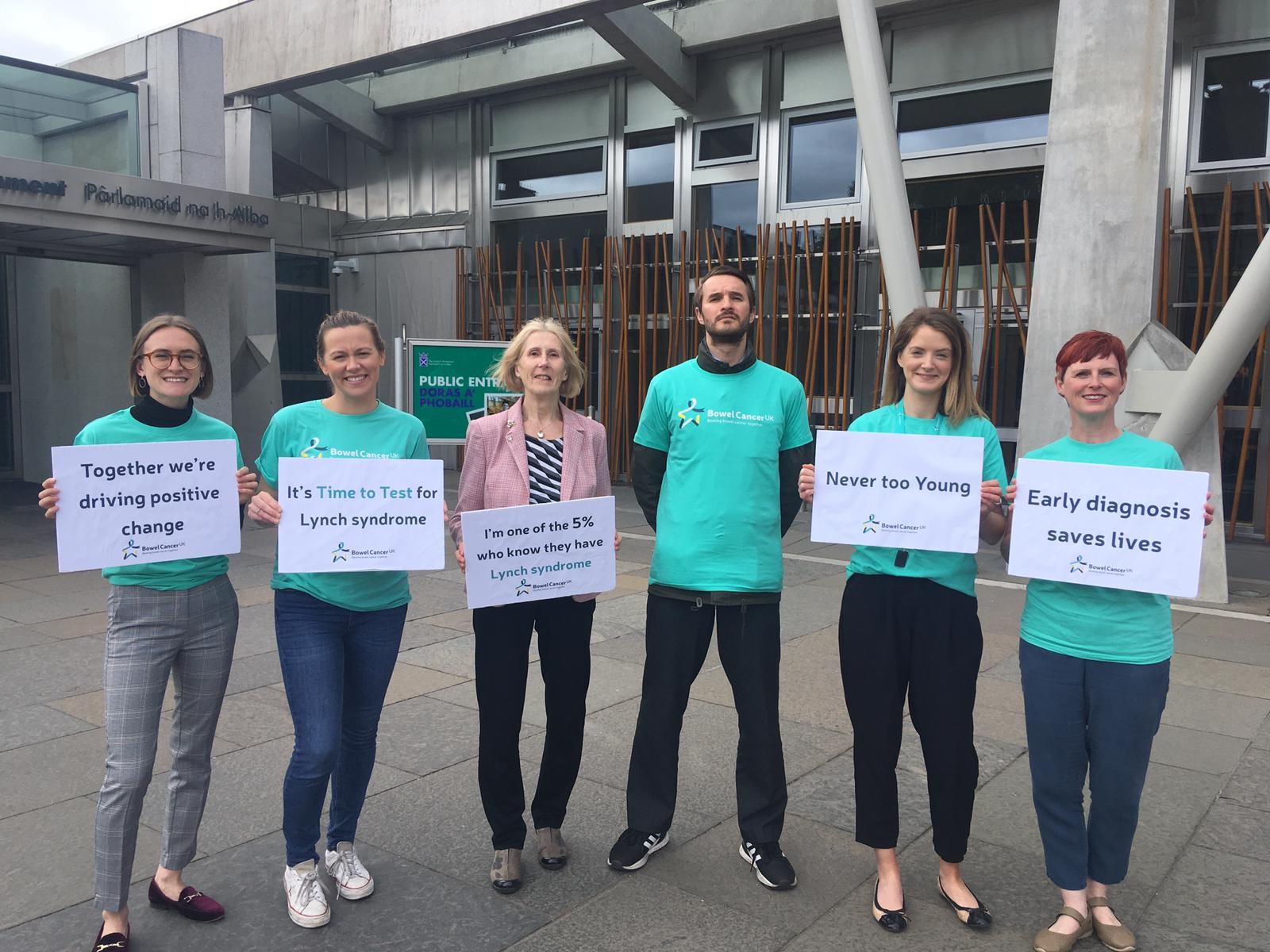