We announce our new Chair of Trustees

Richard Anderson has been named as our new Chair of Trustees. He takes over from Patrick Figgis who stepped down from the role on Friday 31 December after eight years of service on the Board.

Genevieve Edwards, Chief Executive of Bowel Cancer UK, said: "I want to say a huge thank you to Patrick who has been with the charity firstly as a Trustee of Beating Bowel Cancer and then as Chair of the charity since Beating Bowel Cancer and Bowel Cancer UK merged in 2018. Patrick has provided outstanding leadership throughout the merger and more recently during the pandemic when our charity, like many others, had to make difficult decisions. I owe Patrick a personal debt of gratitude for the way he supported me as the charity's new Chief Executive over the past two years. We are currently in a strong position and remain more determined than ever to save lives and improve the quality of life of everyone affected by bowel cancer.

"I'm thrilled to welcome Richard as our new Chair. He has been an invaluable source of advice and support since he joined as a Trustee in 2013 and has been Deputy Chair since August 2019. I'm really looking forward to working with him closely over the coming months and years."

Richard Anderson said: "I'm so looking forward to taking up the role of Chair of Bowel Cancer UK. The charity is dynamic, focused and ambitious and has exciting plans for the future including expanding our services and building our research programme. Our task is urgent. Every 30 minutes someone dies from bowel cancer, making it the UK's second biggest cancer killer. But it shouldn't be this way, because bowel cancer is a treatable and curable disease, especially if diagnosed early. I look forward to working closely with Genevieve and the rest of the incredible staff team."

Patrick Figgis said: "Over the last few years the charity has gone from strength to strength and is now having more impact and reaching more people than ever before. I'm proud of what we have achieved but it would not have been possible without the incredible support of patients and their families, loyal supporters and partners, and wonderful staff and Trustees. I owe each and every individual a huge vote of thanks.

"Richard will make a great Chair and I have every confidence that the charity will continue to flourish. I'll remain a loyal and committed supporter of the charity and look forward to seeing it grow and develop and continue to serve all those affected by bowel cancer." 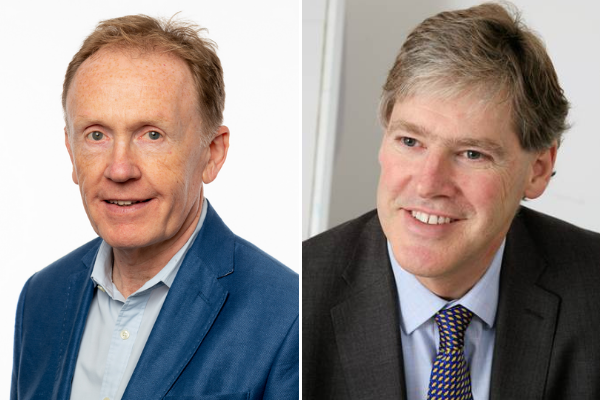