The NHS in England has launched a new trial inviting patients to swallow a tiny camera, which films inside their body, to look for signs of cancer.

The capsule, which is the size of a large pill, passes through the large bowel taking two pictures every second to check for any potential signs of cancer or other major conditions like Crohn's disease.

Hospitals will pilot the device, known as a colon capsule endoscopy, for around 11,000 people in the coming months, avoiding the need for most to go to hospital and helping ensure those who do need potentially life-saving checks can get them more quickly.

The procedure normally takes between five to eight hours and provides full images of the bowel, with information sent to a data recorder in a shoulder bag, so patients can go about their day as normal.

For a traditional endoscopy people need to go to hospital and have a camera on a thin cable inserted through their back passage to look at different parts of the bowel.

Genevieve Edwards, Chief Executive at Bowel Cancer UK, says: "This trial has the potential to make a huge difference for people with bowel cancer symptoms who are waiting for a diagnosis. The capsule, which is also currently being rolled out in Scotland, can be used to rule out bowel cancer, reducing the need for colonoscopy services.

"NHS endoscopy units have been over-stretched for a number of years, with demand for colonoscopy sky rocketing over the last five years. This trial could play a vital role in alleviating some of this pressure and enable the NHS to prioritise those who urgently need further tests." 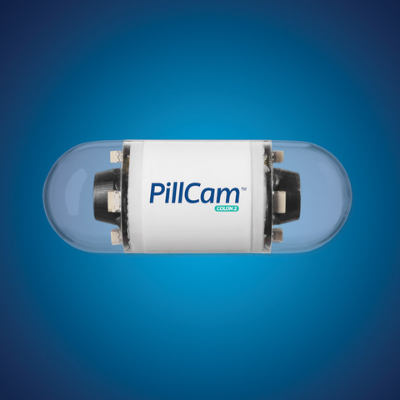