Earlier this year we collaborated with one of our supporters, Beth Purvis, to launch a symptoms diary for people that are worried about their bowel habits. We’re now delighted to announce that the resource has been formally endorsed by the Royal College of General Practitioners (GPs).

Beth was diagnosed with stage four bowel cancer at 37 years old. Her GP thought it might be Irritable Bowel Syndrome (IBS) as the symptoms were similar, but it was difficult to reach a diagnosis without access to a symptoms diary or formal diagnostic tests in the community.

The symptoms diary, pioneered by Beth and supported by Coloplast, aims to help keep track of a person’s symptoms before they visit their GP. This will give a good indication to their doctor whether they need further tests. Patients may not remember all their symptoms during the short appointment so having something written down can be useful.

Every year almost 42,000 people are diagnosed with bowel cancer in the UK, making it the fourth most common cancer and second biggest cancer killer. However it shouldn’t be because it is treatable and curable especially if diagnosed early.

Beth Purvis says: “I spoke to my GP two years before my diagnosis but was told that it was probably IBS and to come back if my symptoms got worse. I was in so much pain I went to A&E and was diagnosed with stage three bowel cancer.

“I had surgery to remove the tumour followed by chemotherapy for six months, but suffered from severe damage to my nerves, which has still not gone away. The following year a routine scan revealed spots on my lungs and I’m now diagnosed at stage four and have been told I’m now considered incurable. I have had surgery on my lungs to remove the tumours and I’m back on chemotherapy in the hope that the treatment will prevent further spread and keep the cancer at bay to extend my life.

“I’m absolutely delighted that the diary has been formally endorsed by the Royal College of GPs. I hope it will help to either rule out bowel cancer or that a person will be diagnosed with the disease early when treatment has the best chance of working.”

Professor Helen Stokes-Lampard, Chair of the Royal College of GPs, said: “GPs know how important it is to diagnose cancer quickly, but it can be really difficult to pinpoint the key symptoms of concern when patients first come to see us, especially when they look so similar to other, less serious conditions.

“The last thing GPs want to do is alarm patients unnecessarily by suggesting that they could have cancer, so having access to something constructive like a symptoms diary to record things in a standard way, could help us unravel what’s going on, and ultimately, save precious time in getting patients the care they need.

“The College has also been calling for better access to formal diagnostic tools in the community, so that every patient – whether they keep a diary or not – can get the answers and treatment they need.” 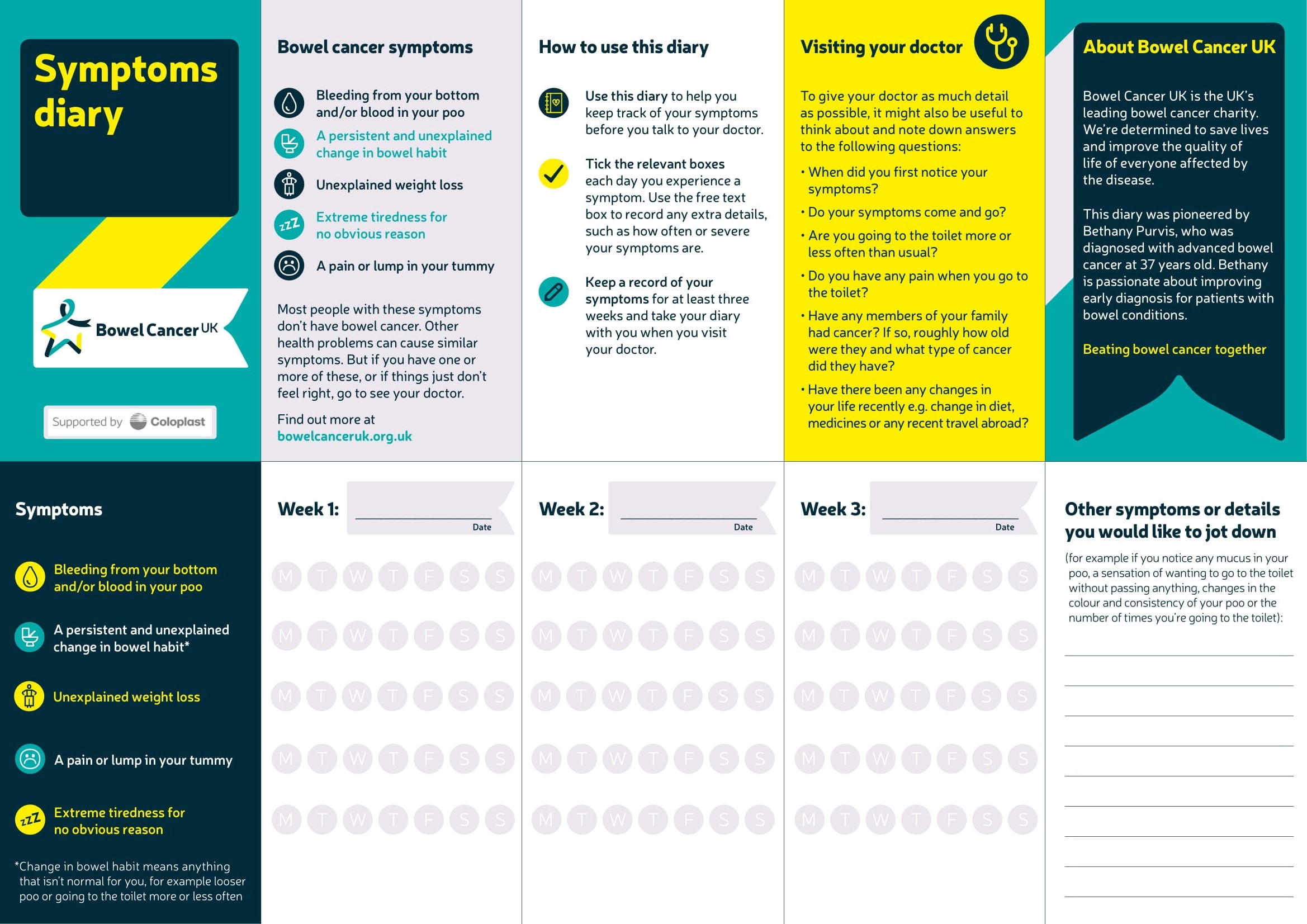