We're supporting a new phase of the NHS's Help Us, Help You campaign, which launches today, encouraging people with potential cancer symptoms to come forward for lifesaving checks.

The campaign hopes to remind people that they should not feel like they cannot trouble the NHS, which is open and ready to treat people. Research shows that three in five people (60%) are concerned about burdening the NHS, with half (49%) saying they would delay seeking medical advice compared to before the pandemic.

The campaign will use TV adverts, billboards and social media to urge people to speak to their GP if they are experiencing diarrhoea, bloating or prolonged discomfort in the tummy area.

New figures from the NHS show that three in five (63%) people said they didn't recognise discomfort in the abdominal area for three weeks or more as an indication of cancer.

A persistent and unexplained change in bowel habit and a pain or lump in your tummy are two red flag symptoms of bowel cancer. The disease is the UK's fourth most common cancer, with around 42,000 new cases of the disease diagnosed in the UK every year.

Amanda Pritchard, the new chief executive of the NHS, said: "People should not feel like they cannot trouble the NHS, which is open and ready to treat people and this campaign will remind people of the signs and symptoms to look out for.

"It's incredibly important that people recognise the common symptoms that can signal a cancer diagnosis – and it's vital that they take action by making an appointment with their GP, so that they can get a test that could ultimately save their life."

Genevieve Edwards, Chief Executive at Bowel Cancer UK, says: "We can't say this strongly enough, if you have any symptoms of bowel cancer please don't put off visiting your GP. They will want to see you.

"Bowel cancer is the UK's second biggest cancer killer, but it doesn't have to be, as it's treatable and curable, especially if it's diagnosed early. So it's really important that anybody with signs of the disease, including bleeding from your bottom and/or blood in your poo, a persistent and unexplained change in bowel habit, unexplained weight loss, extreme tiredness for no obvious reason and a pain or lump in your tummy, contacts their GP straight away." 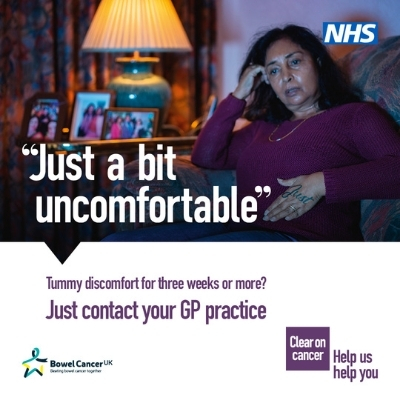