Demand for cancer diagnostic services has increased by almost 14% in the last year, new figures show, with more than 8,400 people waiting for tests that can diagnose bowel cancer. The Department of Health in Northern Ireland statistics reveal that demand for diagnostic services are building with an annual increase of 13.9% (January to March 2021 compared with January to March 2022) for both tests undertaken and waiting lists.

Pressure on diagnostic services in Northern Ireland is leading to less time for clinicians to complete urgent diagnostic test reports within the two day target (76.9% instead of 100%) and resulting in the country having the longest hospital waiting lists in the UK.

Bowel screening levels are however shown to be 24% higher than pre-pandemic levels meaning there is a greater chance of detecting bowel cancers at their earliest stages, which could save hundreds of lives in Northern Ireland.

Health Minister Robert Swann MLA announced £46 million for additional waiting list activity, for the first six months of 2022/23. This is in addition to the £90 million announced last year that funded 216,000 patient contacts, including 120,000 diagnostic appointments.

The funding is earmarked to pay for additional in-house service capacity and to fund the independent sector to help tackle waiting lists.

Furthermore, Omagh Hospital was announced as the second regional Day Procedure Centre. Additional regional endoscopy sessions will see an extra 3,000 patients per year. Plus there will be 20 extra sessions at Lagan Valley Hospital, taking the total to 9,000 extra patients per year.

"While we welcome the additional investment in diagnostic services and plans to fund an additional 9,000 endoscopies per year, more must be done to tackle waiting lists for the thousands of people who are still waiting for tests.

"Political issues are creating uncertainty for clinicians and patients alike, with no annual budget currently agreed to tackle these problems. We need to see a resolution to the political impasse so a budget can be passed and investments guaranteed, to ensure people can get vital tests quickly – this will help to save lives from bowel cancer." 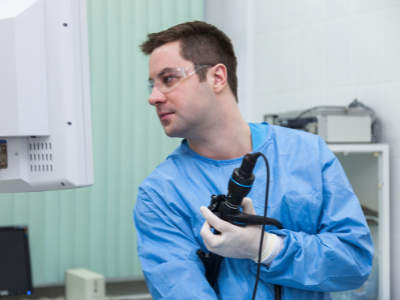