Around half of adults living in the UK (42%) are not aware of any symptoms of bowel cancer – the UK's second biggest cancer killer.

With today (Thursday 1 April) marking the first day of Bowel Cancer Awareness Month, we have released new survey results which show too many people remain unaware of the signs they could have bowel cancer.

One of the key 'red flag' bowel cancer symptoms is seeing blood when you go for a poo, either from your bottom or in your poo but only a third of people are aware of it (32%). The other four main symptoms, experienced by many who go on to be diagnosed with the disease, have an alarmingly low rate of awareness:

We commissioned a new YouGov poll of 2,470 UK adults to gauge awareness of the symptoms of the UK's fourth most common cancer. In April alone around 3,500 people will be diagnosed with bowel cancer and over 1,300 people will die of the disease in the UK.

Knowing the key symptoms and visiting your GP if you have any of them, or if things don't feel right, can help increase the chances of an early diagnosis. But worryingly, a separate survey revealed that one in 20 people with bowel cancer symptoms would not go to their GP, and 30% would wait to see if they persisted or got worse before speaking to a doctor.

Bowel cancer is treatable and curable, especially if diagnosed early. Nearly everyone diagnosed at the earliest stage will survive bowel cancer but this drops significantly as the disease develops.

Genevieve Edwards, Chief Executive at Bowel Cancer UK, says: "Bowel cancer remains the UK's second biggest cancer killer, and it's shocking that people aren't aware of the symptoms to look out for. If you notice any signs of bowel cancer, or if things just don't feel quite right, please visit your GP. While the disease largely affects people over the age of 50, around 2,500 under 50s are diagnosed each year, so it's really important people seek advice as soon as possible – whatever their age – if they're worried."

Professor Peter Johnson, NHS clinical director for cancer said: "It is so crucial that people are aware of the signs of cancer and go for a check when they find them – the NHS is ready to see you. Whether it's abdominal pain, weight loss, or any other worrying change, I cannot stress enough how vital it is that you see a GP because if it is cancer, the earlier it is caught the more treatable it is."

We know that the 'stay at home' message during the pandemic unintentionally put some people off visiting their GP with symptoms of bowel cancer, because they didn't want to burden their doctor or risk catching COVID-19. NHS staff continue to work incredibly hard to keep cancer services going, and the NHS is open – it's really important that people contact their GP as soon as possible with any concerns.

Bowel Cancer Awareness Month is an important opportunity to find out more about the disease. Join the charity's Facebook live on Friday 16 April at 12.30pm for around 30 minutes and learn about the symptoms, the importance of the bowel cancer screening programme and how to reduce the risk of the disease. 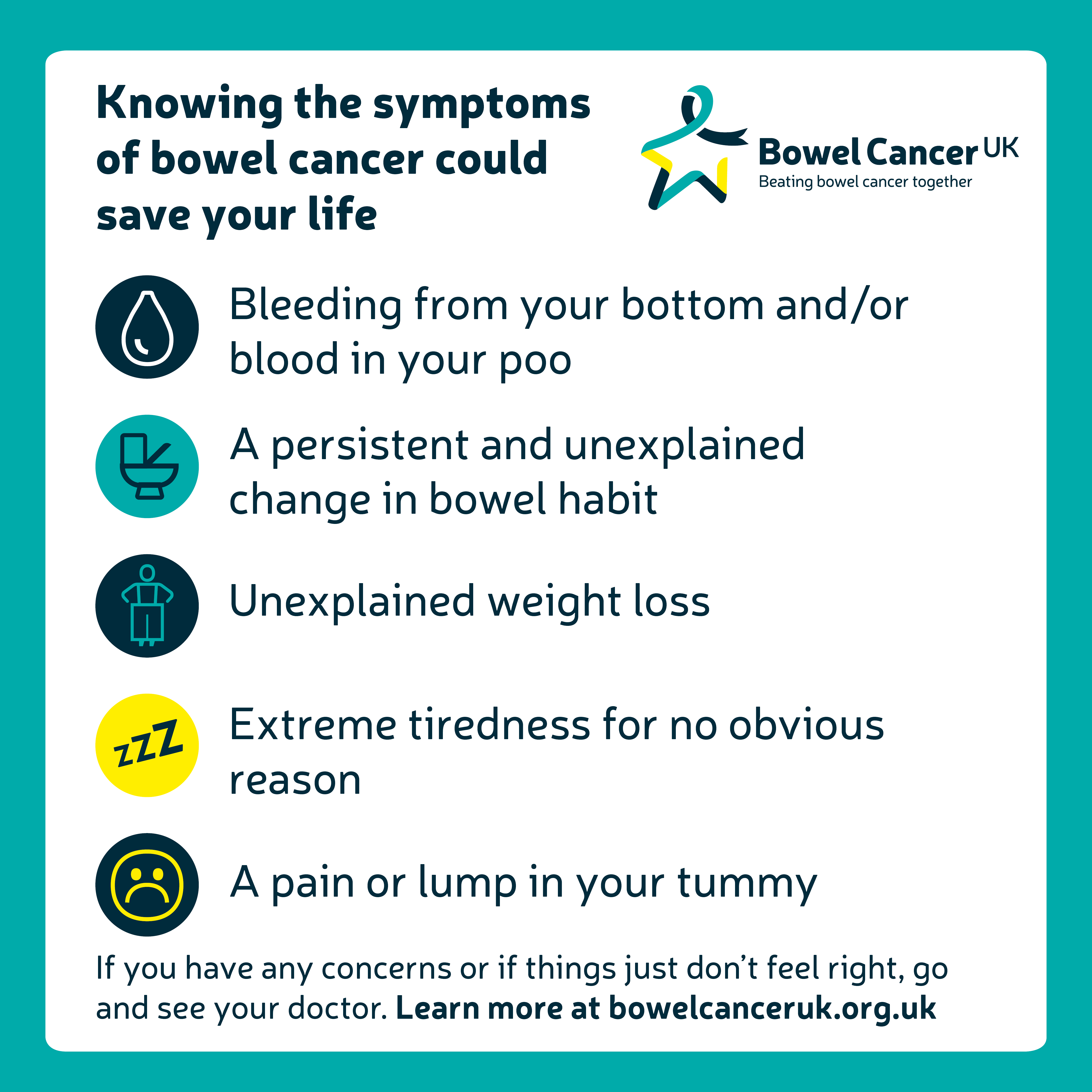