Now you'd think that a birthday lunch with your family at The Ivy in Cambridge is no hardship! However, for me, on 10 October 2020, it presented a real challenge! What could I choose from the menu that would have the least impact on my rather delicate abdomen? For about two weeks, I had been complaining about discomfort and bloating on my right side, particularly after eating. My GP thought it was likely to be an issue with my gall bladder or appendix, certainly nothing to be worried about. How I wish that was true.

Fast-forward just a few days and everything changed. Shortly after dinner, I started being sick. We've all been sick after eating at some point in our lives, but this was different. The sickness didn't stop. Thinking it was food poisoning I was determined to ride it out on my knees next to the toilet. Thankfully, my partner, who happens to be a GP, knew that things were not right and took me straight to A&E. I certainly mustn't have been looking my best because there was no arduous wait in the waiting area. I was immediately on a bed having my stomach drained and my arm connected to all sorts of tubes. When I was a little more comfortable, I was wheeled off for a CT scan and I waited patiently for the results. Nothing could prepare me for the news that would follow.

A doctor appeared with a rather concerning look on his face. He proceeded to explain that my ascending colon was completely blocked by a tumour, which was almost certainly cancerous. Reaching the end of his bleak summation, he simply said how sorry he was for something so rare to occur in a person as young and otherwise as fit as me. Tumour. Cancer. Rare. Young. These four words played on repeat in my head as I temporarily became disconnected from the world around me.

You see, just five years ago, I was in hospital with my wife as she was told in similar, dramatic fashion, that she had breast cancer. It was an illness that I watched slowly destroy her body until she passed away in 2018. I couldn't quite comprehend that I now faced the same fate. In desperation I prayed a simple prayer, asking God for a second chance at life. Now Gabriel didn't appear, nor was I enveloped by brilliant white light from heaven. However, I did experience, what I can only describe as a deep inner assurance, that all would be well – despite my personal experience telling me otherwise. I needed this for the journey that was about to commence.

The following day I had extensive, invasive surgery to remove the tumour and as much non-vital healthy tissue as possible from the surrounding areas, to limit the chance of reoccurrence. Apparently, I amused the doctors in recovery. Upon waking I asked the junior doctor how her day had been and repeatedly asked anyone and everyone whether I had a stoma or not! Once I emerged from the rather pleasant morphine induced 'trip', I learnt that the surgery was successful. Due to the COVID risk, I was sent home just seven days later to begin a rather tough recovery.

It was during this time of convalescence that my situation – or predicament – became clearer. There was genuine concern that the cancer may have spread to my liver, lungs and peritoneum (you may as well Google the last body part – I still don't really understand what it is!). I was in a weird limbo state, walking a tightrope between a curative outcome on one side and a premature death on the other. I went for a PET CT scan on 16 November, where the extent of the disease came to light. To my great relief, the oncologist told me that a curative outcome was possible. The scan confirmed a small area of cancer in my liver, which was operable and no cancer in my lungs. As for the peritoneum, the scan was inconclusive, but as the area of concern was also operable, the news was far better than it could have been.

The treatment plan set out was as follows: Four cycles of oxaliplatin and capecitabine, a liver resection, followed by four more cycles of the chemotherapy. Sadly, events did not unfold according to plan. Following the fourth cycle of chemotherapy, I became so unwell that I was admitted to hospital. My tummy had swollen to twice its size, I had a nosebleed that wouldn't stop and I looked distinctively yellow! A CT scan confirmed that my liver was in a mess. After a rather brutal liver biopsy, involving a tube passing through a vein in my neck, through my heart, around my lungs to take a sample from my liver(!), doctors confirmed I was the 'one in a million', who had a rare allergic reaction to the oxaliplatin, called sino-occlusive syndrome (SOS). Having somehow survived the first three cycles, my liver went on strike after the fourth! Thankfully, within seven days and two platelet transfusions later, I was back home and feeling more normal.

I'm pleased to say that the rest of my journey was far easier after this point. I had a liver resection in May 2021 at Basingstoke and North Hants Hospital. During the procedure, the surgeon examined the peritoneum and found no evidence of cancer. Furthermore, the liver tumour was removed with good margins. By September, I had completed a further four cycles of capecitabine, and a few weeks later I was back in the scanner for my first post-treatment scan. In pretty miraculous timing, the day after my 40th birthday – a year on from when this story began – my oncologist called with the incredible news that the scan was completely clear!

Having returned to fulltime work, playing tennis twice a week and working out at the gym regularly, it's almost unbelievable to see where I am now, in comparison to just six-12 months ago. I am so very grateful to the team at Addenbrooke's and Basingstoke for their expert care, my partner Rachel, family and friends for bearing with a 'challenging patient', two little ones who are joy-bringers, and to God for answering my prayer. Given the changes to my diet, lifestyle and deepening Christian faith, I feel confident that each scan over the next five years will remain clear, evidencing my total freedom from cancer.

Listen to Paul's story by clicking on the video below. 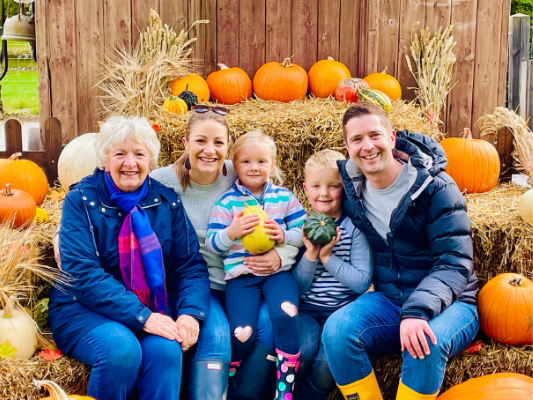