I was diagnosed with stage three bowel cancer in April 2019.

I’d been visiting my GP for almost a year before I was diagnosed. I was initially being treated for IBS, but as 2018 rolled on, none of the medication I was being prescribed was helping. I had such bad constipation, was so tired and I was losing weight like nobody’s business. Sometimes I’d just cry with tiredness in the toilet. As my six year old son said "Mum, your bum’s not right!"

It was so frustrating knowing that something wasn’t right, but also feeling like the people who were meant to be helping me, just weren’t listening. I was in and out of the doctors, but I wasn’t getting better, I was getting worse.

Eventually I was referred for a colonoscopy. It sounds silly, but I was actually happy to take the prep drinks, it was a real relief to my constipation and gave me a little respite. I was sedated for the procedure, which only took about 15 minutes.

After the colonoscopy was finished, the consultant said he had noticed something. I froze. Of course going into this, I knew it was a possibility they might find something, but it didn’t feel real. I had five biopsies taken along with some blood, then I called my partner and asked them to come and meet me.

We sat together in the waiting room, holding hands, until the consultant and colorectal nurse came to speak with us. They explained that during my colonoscopy, they’d seen something that needed further examining. I had to have an MRI scan and then a CT scan. After that, all we could do was wait for the results.

At the same time as I was waiting to hear back, Bowel Cancer Awareness Month (which happens in April) had just started. It felt really ironic, but also made me realise just how many other people had been in a situation like mine.

On 4 April 2019 I was called into the hospital and told I had stage 3 bowel cancer. Thankfully my 10cm tumour was contained within my bowel walls, but it was too big for the medical team to operate on. So at the end of May I had five weeks of chemo and radiotherapy to try and shrink the tumour.

I’ve just had the surgery to remove the tumour. It was a ten hour operation and I have to say it was incredibly tough. They found it had spread to one of my lymph nodes. I’ll be starting another four rounds of chemo. I can’t say I’m looking forward to it, after all having chemo isn’t pleasant.

But I feel more prepared for it now. I know that the side effects kick in instantly for me, so I can ready myself for that a little bit more.  Once I’ve had my first three rounds of chemo, I’ll be having my ileostomy reversed and hopefully then I can start rebuilding my life.

I’m doing my best to stay positive and strong for my son, I want to keep things as normal as possible for him. But I won’t lie, having cancer is hard. At times I’ve felt like its mental torture. The waiting for scan results and not knowing what comes next is unbelievably tough. I try and talk about it so I’m not just bottling everything up, but losing that sense of control has been really difficult.

I’m the kind of person that’s always at 100 miles per hour. I can’t stay still; I’m running after my son, throwing myself into my job as a hairdresser or flexing my household cleaning OCD. But now, I’m stuck in the same position. Everything’s on hold and I’m physically weaker than I’ve ever been. It’s obviously had an effect on me mentally. It was always a running joke that I’m a chatterbox (which as a hairdresser comes in handy!) but I do feel like I’ve lost that bubbly part of myself.

I spend a lot of my time at home now and I’ve got depression and anxiety. Sometimes I worry that my cancer has become the talk of the town and it’s all people see in me. I’ve lost a lot of my confidence.

One really big stress factor has been benefits. I never thought I’d need to apply for benefits in my life, but it’s something I can’t not do. I’ve had an absolute nightmare with the system. You use the benefits system when you’re in a low place, but it’s designed so you just feel worse. I’m currently in an ongoing dispute with the DWP over one of my benefits. Their medical assessment left out key details on my condition and treatment, so I’m fighting to have this amended.

Overall my life has changed dramatically since my diagnosis. But I know that there is a light at the end of the tunnel. I have amazing people around me, the best partner anyone could ask for and a beautiful little boy. With all my family and friends around me, I know I can keep pushing and things will start to feel better. 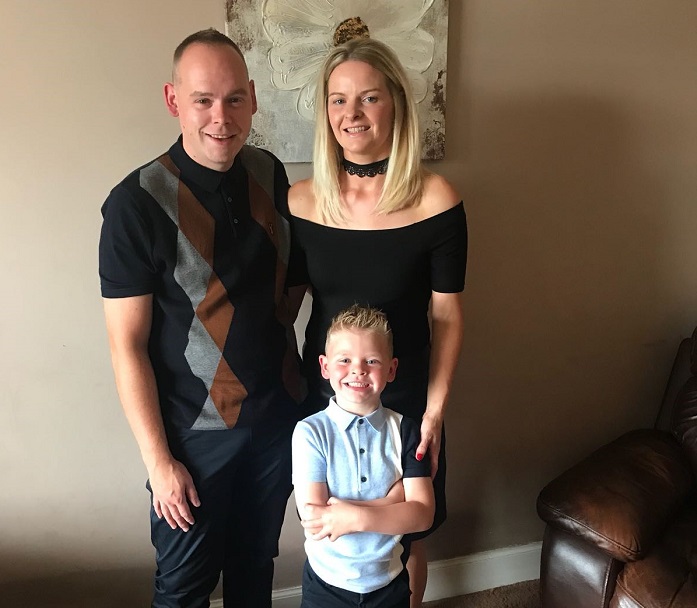