I was diagnosed with bowel cancer in February 2019, aged 38.

To say I was shocked is an understatement. Bowel cancer is something I associated with the older generation. My grandad had it in his 80s and passed away in hospital a short while later, and his daughter, my aunt, passed away from bowel cancer a few years ago. She was also in her late 70s/early 80s. Although there is some family history my bowel cancer was not genetic. I knew of the disease, but at the same time I didn't know a lot about it until I had it myself.

Around early summer time in 2018 I started noticing a small amount of blood when I went to the toilet. I wasn't that concerned, it was a small amount. In my early 20s I had something similar which ended up being something very minor that was resolved with some medication. I wasn't bleeding all the time and it would come and go. Then, towards the end of summer, it started to get worse, and I was going to the toilet a bit more often. My twin sister told me that I should go to the doctors as she was reading up what it could be. We thought it was probably nothing, but I needed to make myself a doctor's appointment just in case. I still didn't think I could have cancer and I told her that. I exercise regularly, I eat very healthily, I had been a vegetarian for years, and more recently a vegan, I don't drink much, I don't smoke.

I made a doctor's appointment and the first doctor I saw didn't seem that concerned. I wasn't examined, she didn't really ask me much and I was told to make an appointment for a blood test. My blood tests came back fine. I did notice over the few weeks that I was losing some weight, not drastic, but I was running a lot more so thought the weight loss was down to doing more cardio. I was also starting to go to the toilet more frequently. Another doctor requested I come into the surgery to discuss my blood test results and next steps, and this next doctor I saw was excellent. She listened, asked questions and examined me. She wasn't happy with putting my symptoms down to IBS until all other possibilities were looked into. So, she booked me in for a non-urgent colonoscopy. The next 8+ weeks waiting for the colonoscopy my health really started deteriorating. I was losing more weight, I was bleeding a lot more and going to the toilet up to seven times a day. By the time I had my colonoscopy it was late January 2019 and I actually felt ill.

Prior to the colonoscopy I still didn't think I could have cancer. The only reason I took someone to the hospital with me was because I was being sedated and couldn't drive myself back home. The day before the colonoscopy I remember I went to work as per usual, that evening I watched Tottenham play football on TV, the difference was I was sipping on Moviprep. That drink needs to come with a warning label…

You can watch the colonoscopy whilst it is being performed, it's interesting but strange at the same time seeing your insides. I remember the consultant asking me if I prepped okay. I realised a while after that what he thought initially was waste was a large 8-10cm tumour in my lower rectum. He moved the screen away so I couldn't watch anymore and I could feel him snipping away. I asked him what he was taking biopsies for and he told me he would speak to me later when I am in recovery.

The rest of the day was a blur, and so were the next few weeks. I was told I had cancer, I had to try and get the words out to tell my family and friends.

The rest of the day was a blur, and so were the next few weeks. I was told I had cancer, I had to try and get the words out to tell my family and friends. The people close to me had the awful job of telling other family and friends I had cancer. There were a lot of tears, shock and many questions I didn't have the answers for. And it felt like it was taking a long time to get those answers.

For me the worst part of having cancer is not what it did to me, but what it does to the people you love. I automatically thought that's it. I thought about what my funeral was going to be like, whether I should help plan it. How would my twin, Preeti, cope without me? I came into the world with her, she's my soulmate, and we do so much together. What about the rest of my family, what about my partner? Each of us have huge parts in other peoples' lives. Are they going to be okay going through the big C with me?

I spent 12 days in hospital and had two operations in March 2019. The day after I left hospital I had the test results back and it was stage 2, not stage 3 as initially thought. I have an ileostomy as a result of the bowel cancer. I had no idea what a stoma was before and the idea of going to the toilet in a bag attached to my stomach sounded awful to me. In reality, I am alive, the cancer has gone and it's really not as bad as I thought. I can still do my job, I can still workout, I can still play football. I am just a different type of normal now.

I've had a number of minor operations to my bowel since and I had another biopsy for a small mass found in my lower colon in March of this year. Thankfully that came back all okay and the cancer has not returned. I was meant to have the operation for the reversal in April 2020, but understandably due to Covid-19 there have been a few delays. So I am still a bag lady for now. I may have a bag for life, which I am okay with as I have my health.

My work, my manager in particular, have been excellent throughout my illness. I'm a detective and being in the police is so important to me. I love my job and being able to be out and about. My manager was one of the first people I told about the tumour and I don't know if it's his practical police side or the fact he cares (probably a bit of both), but he took away so much stress from me. I don't know if he realises how much he has done for me. Being in the 'job' I feel like I have extra family, there are so many amazing people who have given me so much love and support.

I took part in Walk Together for Bowel Cancer UK because I want to help raise awareness of the disease. It's something that can be overlooked and people look for other reasons for their symptoms. The more I read about it, the more I see bowel cancer can affect people of all ages. You are not too young. You are not too healthy. You are not too strong. It can affect us all.

The charity also supports people through their illness. People need different levels of support and Bowel Cancer UK has so much information and support out there for people to access for free.

I'm walking the five miles for Walk Together with some of my footie girls. I've met some of my best friends through football and they are amazing people who have been supportive and positive with me throughout my initial diagnosis and they continue to be there for me.

I'm very fortunate to have strong and supportive family and friends around me, I couldn't have got through this year and half without them. I'm also fortunate to be in a job with supportive managers who have looked after me, which made me think about all those people that may struggle with work, and lack of support. It's so important that there are organisations out there to look after people, and give them the information and support they need.

We are stronger together.

Listen to Navneet's story by clicking on the video below. 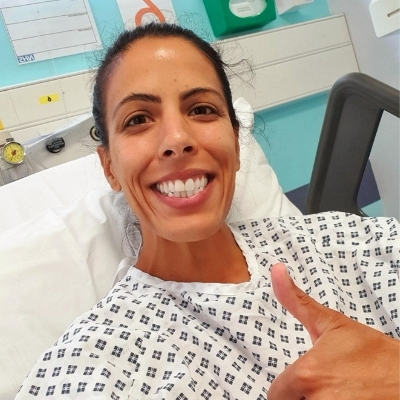 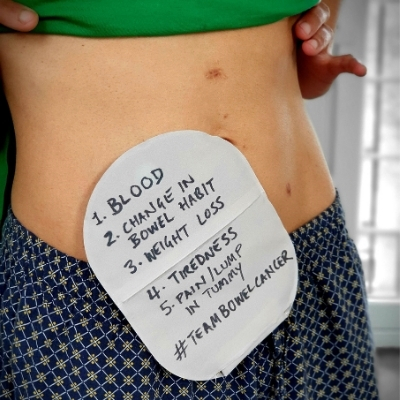 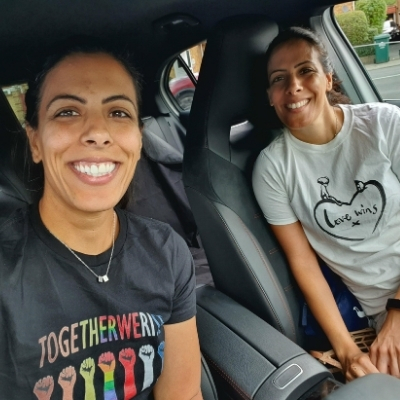 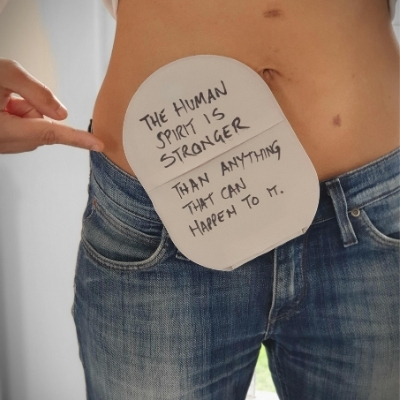