It was October 2020 when I first felt a sharp stabbing pain in my lower abdomen, whilst I was making a cup of coffee in the morning. By Christmas, the stabbing pains became worse and my bowel movement had changed. I was feeling very bloated and constipated and I could feel a lump internally.

I told the first doctor I visited that my father had recently passed away and I was struggling for a poo, with stabbing pains in my lower abdomen, and a lump the size of a golf ball in my lower abdomen. I was told it was stress as my father had recently passed away and the circumstances we found ourselves in due to COVID. The physical examination could not find the lump; I was given a month's supply of laxatives to be taken morning, noon and night.

After finishing the laxatives I was in more pain, the lump felt bigger, and I had stomach cramps. I went to see another doctor who could not find the lump after another physical examination. I was told it was irritable bowel syndrome and given Buscopan tablets and asked to research the FODMAP diet and given more laxatives.

I went back to see the GP, after only two weeks and told them the IBS treatment was not working and the FODMAP diet I was following was not making any difference. I asked for some tests to be done to eliminate any other potential causes. The doctor reluctantly agreed and I was sent for some blood tests. The test showed my inflammation was high and I was asked for a stool sample. The sample showed my inflammation makers to be over 2,000 and so they sent me for a colonoscopy.

My colonoscopy took place two weeks later (my employer provides private health insurance), when a tumour was found. After the discovery of the tumour and having a PET scan to confirm the cancer was isolated at my bowel. I was given Folfoxiri (chemotherapy) every two weeks for three months.

The side effects caused cramping in my right leg, my veins turned black, nausea and severe chest pains. I was in A&E shortly after the first round. The doctors said it was inflammation caused by the chemotherapy or a reaction to the steroids.

The second round caused me to be hospitalised fighting off a staph infection within my lungs, followed by another infection which lasted for twenty weeks on and off. Finally, they found that the cause of the infections was that the tumour had perforated and was leaking toxins into my bloodstream. Whilst in hospital I did not have any chemotherapy and the tumour had grown to the size of a small watermelon. I then had to have emergency surgery; a Haartmanns procedure, to remove the tumour. Once the tumour was removed they did a test for Lynch syndrome. The tests came back positive and so my direct family are being tested.

After surgery, I was very unwell and spent a week in the intensive care unit. My heart rate was very high and I was being closely monitored as there was a strong possibility that I may go into cardiac arrest. As my condition improved I was moved into isolation, I contracted pseudomonas aeruginosa pneumonia and remained there until I was moved onto the rehabilitation centre to help me get back on my feet.

I've been left with severe nerve damage to my right leg and foot. Medium damage to my left foot and right arm and hand. After living a very active life and eating well, I'm now disabled and unable to walk independently and stuck eating beige food as I have a stoma which cannot be reversed until I am better. The nerve damage is still being investigated by the Queen's Hospital for Neurology, London. I'm currently living in a second-floor flat with no lift and the only time I get to go outside is when the NHS transport service carry me down and take me to my appointments.

After a routine CT scan, they found anomalies within my right lung cavity, a PET scan was done and it is not cancer and is now being investigated by the lung team there. Coronavirus has had a big impact in the last year. Not only did it take my father's life while I was suffering from cancer. It also caused me to be isolated within the hospital wards while I was fighting off infections and recovering from surgery.

My employer, Ocado Group, has been great though. My manager Jen has supported me all the way and we've met both formally and informally to check on my progress. Ocado provides private medical insurance as a benefit which I have taken advantage of along the way to help speed up my diagnoses and treatment.

I've also started to track my journey in the form of a blog which I've found very beneficial: https://www.coloncancerandme.co.uk/ 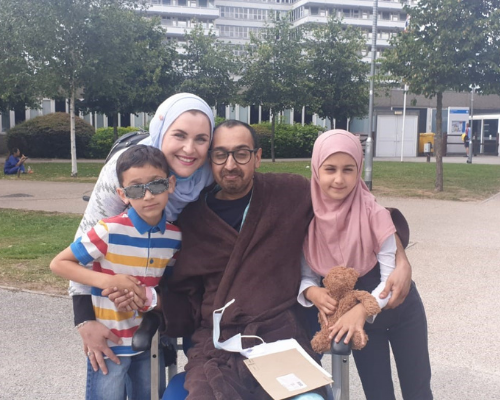 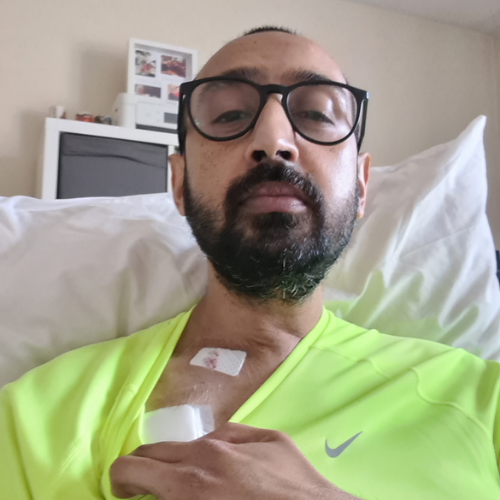