I was diagnosed with stage 4 bowel cancer in April 2020.

Looking back during the year of 2019, I was incredibly tired – shattered at times. I would often arrive to work at 8.30am after a 50 minute commute and sorting kids out and I'd say to my team, 'someone get me a pillow I could sleep right here on my desk'. Of course I didn't, but I can recall total exhaustion at times. Like most of us though, we carry on and put it down to work, kids, house duties, trying to juggle a million things, and I had no other symptoms.

In February 2020 I woke up with a heaviness low down in my pelvic area, almost like being heavily pregnant but I definitely wasn't! The pain and uncomfortableness actually kept me in bed all weekend which was very unusual for me, so I took myself off to the doctors on the Monday.

My GP was lovely, and she took it seriously, suspected a possible ovarian issue and booked me in for scan a few days later where I was diagnosed with an ovarian cyst around 10cm by 7cm at that point.

The country had just gone in to our first lockdown and it was a scary time to be in hospitals. Initially although the scan showed an ovarian cyst, there wasn't talk of surgery as the scans weren't giving a clear enough image of the cyst and covid restrictions meant surgeries were being cancelled. An MRI a week or so later showed a lot of blood in my pelvic area and that the cyst was an irregular shape. I was also made aware there was some shadowing on the cyst and clinicians began to talk about the cyst as a 'mass'. By this time I was certainly starting to become more and more anxious about what the mass was.

As I waited for more information on scan results, I ended up in further pain and was admitted to A&E where the next day I was operated on to remove the mass due to the pain I was in. The surgery was difficult, I lost a fair amount of blood and had to be given a blood transfusion and stabilised overnight in ICU (intensive care unit) – I didn't know any of this was going on but my poor husband and family had an agonising night.

It's been an incredibly tough time but I am so lucky to have amazing family and friends in my life and if this journey has taught me anything, it's how incredibly important loved ones are.

I was finally operated on successfully the next day where they removed a 20cm mass and one ovary. It was tough being in hospital in the pandemic and a scary place to be on top of having emergency surgery, little did I know at that point worse was to come.

When the decision was made to remove the mass after my A&E admission, there was no trace of any other suspect tumours or masses anywhere in my body, not even in my bowel. My CT scans were completely clear everywhere else. When I was called back to the hospital for histology results after the ovarian mass had been tested, everyone was incredibly shocked that it came back showing the mass was secondary bowel cancer.

I was given my diagnosis without any family with me, completely on my own other than the medical team due to covid. I was in complete shock, fearful and my blood ran cold as I heard the words. It's a feeling I will never forget.

Initially it was thought the cancer had already been removed as there was no evidence of a bowel tumour on my scans so the discussion remained as positive as possible and that there may not be a need for further treatment. However, within a week of that initial diagnosis in April 2020, a colonoscopy revealed a tumour in my bowel so at this point it was becoming more scarily evident that I would need treatment and surgery.

A pet scan then took place in early May and things went from bad to worse. The pet scan showed it had already spread to a small amount of my liver and this cancer was now deciding it wanted to take up a place on my other ovary. I know now the masses on my ovaries are called a Krukenburg cyst and something that doesn’t respond well to treatment.

I've had six rounds of Folfox chemotherapy between May and August 2020. Following chemotherapy a scan then showed the cancer had stabilised with some shrinkage but the ovarian mass hadn't responded so well. The second mass in my ovary had continued to grow to around 15cm at that point and needed to be operated on to come out due to the pain it was causing and rate of growth.

There was much confusion and lack of clarity with my local hospital about what surgery was available and what they were prepared to do. So I became my own health advocate and took matters into my own hands researching radical surgery options to give me the best possible chance.

I found an incredible surgeon at Imperial Hospital in London who performed HIPEC surgery in December 2020 on me. The surgery removed my bowel tumour, I had a full hysterectomy, effectively a scrape out and wash of all my insides to get rid of any cancer that might be lurking in my peritoneum, as well as hot chemo put inside me in theatre to help get rid of traces of cancer. It was radical surgery and took 12 hours. Another agonising wait for my family!

Surgery was a success but recovery was tough. I was in hospital overall for 17 nights with no visitors due to lockdown apart from one day when they let my mum in as I really was desperate to see my family. That day was amazing, I did not want to let her go and I even got to see my dad briefly.

I had six nights in ICU and then on to a step down ward for the remainder of my nights in hospital. I spoke to my husband and children every day but it was incredibly tough being away from them. Luckily I was home for Christmas!

Having taken some weeks to recover from surgery, I went back on Folfox chemotherapy at the end of January 2021 and I am still receiving treatment. Soon to be re-scanned to see the effects of chemotherapy on my liver tumours and plan next steps. I'm already anxious for the scan results.

My life in some ways has become unrecognisable. I don't physically recognise myself a lot of the time, my skin is damaged, and I have medical hair extensions due to the thinning and loss of my hair. Due to shielding I haven't left the house much in the last year, which also plays into the mental health side of how I feel, as normal life distractions haven't been possible through the last 12 months meaning cancer has consumed my thoughts much of the time.

My body is very fatigued, I have hardly any muscle strength left (I only had a little before to be fair!!) and my body and mind spend a lot of time in a heightened state of anxiety of what is next and the impact on my family.

We have two boys who are eight and 10. Heartbreakingly we lost my husband's sister (my beautiful sister in law) to breast cancer in June 2016 and she left behind her three wonderful daughters who were at the time aged 10, 13 and 18. Circumstances meant that the youngest two girls needed a secure and loving home so myself and my husband Grant, became their legal guardians. Our two youngest nieces have lived with us for the last three years and we live together as a family of six with their older sister living close by and very much part of our extended family.

Cancer has caused tragedy in our lives and I am so incredibly proud of my nieces for their bravery and kindness every day, and now supporting me with love and care as I go through my own diagnosis.

It's been an incredibly tough time but I am so lucky to have amazing family and friends in my life and if this journey has taught me anything, it's how incredibly important loved ones are.

I am now on a mission to raise as much money as I can to help us fight and beat cancer. A global pandemic has changed the world forever in the last 12 months, but with collaboration, science, funding and research across the world, we are managing to come through it to reach better and safer times. Imagine the difference we could make for cancer patients if we pulled together in the same way to beat cancer? Because in my view 'if not now then when?'. 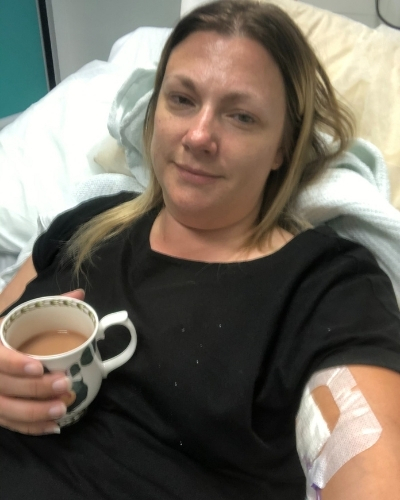 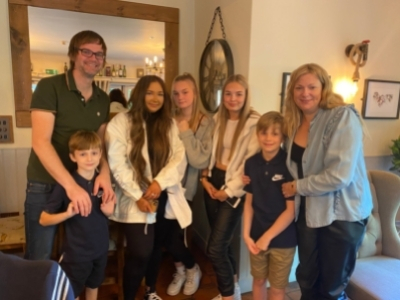 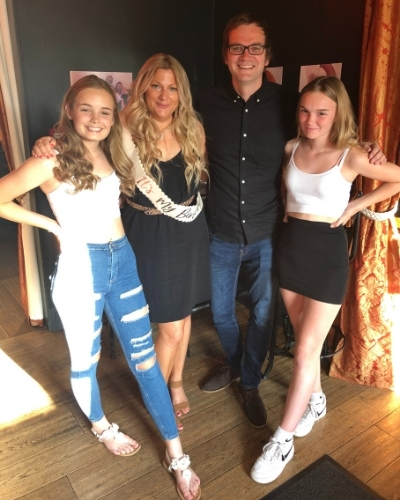