I was diagnosed with bowel cancer in October 2014.

In January 2014 that year I had a sore stomach so I went to the GP who put it down as irritable bowel syndrome (IBS). Then as I had passed blood one day in March, I went back to the doctor. He put it down to an internal hemorrhoid and confirmed I had low iron. I didn't have any other symptoms but I was still in a lot of pain, my GP thought it could be Crohn's disease and recommended that I see him in three months' time when the iron tablets had a chance to take effect.

I went back in June and was told to keep taking the tablets and to return in August for a check-up. I did just that and a blood test showed that my hemoglobin level was 90, which is very low even being on a course of tablets. The doctor then requested an urgent investigation so after six more weeks and following a colonoscopy in October I was diagnosed with bowel cancer two days later.

My tumour was on the right side, with only 1cm clearance for surgery. I had my CT scan the following week to confirm the stage of the cancer and to see if it has spread anywhere else in my colon or to any other organs. Two weeks passed and they confirmed I was going to have surgery on half my colon on 5 November.

However in light of my diagnosis I was positive from day one and although my family were worried, I knew positive thoughts may help promote positive outcomes. The day before surgery I was told to ring the hospital for a bed and told to come at 4pm that day. I had to clean out my bowel with some MoviPrep. Before I knew it, a staff nurse got me up early and I was awake from 5am, told to shower before the surgeon and his team came to take me to theatre.

My surgery began at 8.20am and I was out by 1pm. I felt very tender and sore, the pain killing drugs and morphine helped me though. I was in the hospital for four days but as every day passed I was determined to do something new whether it be walk, go to the toilet alone or dress myself.

I was allowed to leave the hospital on the fifth day and was advised tests would be done on the tumour to diagnose the stage. The tumour was removed along with 12 lymph nodes. It was the size of a golf ball and I have been left with a 25cm scar, which got me down a little but I am over it now.

I had 20 lymph nodes (not 12 as I thought) taken out and they are all negative. However although the surgery went well and they got the tumour and half my bowel out I got told, there are some traces in my vascular system so I had to do six months chemo to mop up some microscopic cancer cells. This finished in July 2015.

Over the next four years I had various check-ups, MRI scans and a colonoscopy but all was ok when I went to my oncologist for the yearly review.

In November 2019, I spoke with my new oncologist and was officially given my remission letter. In February 2020 I had another test as a check-up so fingers crossed, I'm still clear. 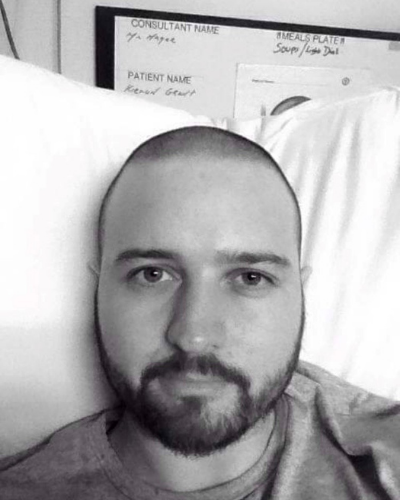