I was diagnosed with bowel cancer two days after my 37th birthday when my daughter was just five months old.

My mum also had bowel cancer and had died just three months earlier, at just 66 years old. Life seemed so unfair and cruel. I was still grieving for my beautiful mum and now I was facing my own bowel cancer journey.

It began back in March 2020, as we entered the first lockdown. I was three months pregnant and I was experiencing heavy bleeding from my bum. I called my GP multiple times to express my concerns, and they said I was too young for bowel cancer, despite knowing my family history. They said it was likely I had piles and gave me various creams to try but nothing worked. After a particularly scary poo, I called my GP in floods of tears, I just knew that it was something more sinister. At this point I was desperate to have an examination as all of my consultations had been over the phone due to COVID-19. They still weren’t seeing anyone face-to-face but they arranged for me to pick up a stool sampling kit, and it was sent off to a lab. When I called them a few weeks later to follow up, they admitted that they’d lost the sample.

At this point my mum was seriously ill in hospital and I was heavily pregnant. I put the bleeding to the back of my mind. My daughter Penelope was born in September and shortly after my mum went into a hospice and sadly passed away. In accordance with my mum’s wishes we raised over £6,000 for Bowel Cancer UK, which is testament to what a truly wonderful person she was.

After the funeral, I changed doctors and luckily they took my concerns seriously and I was booked in for a colonoscopy. Although there was a backlog due to COVID-19, so I had to wait three months.

During the colonoscopy the doctor asked me if I’d had a CT scan and took a few biopsies. I could tell by their faces that something wasn’t right.

During the colonoscopy the doctor asked me if I’d had a CT scan and took a few biopsies. I could tell by their faces that something wasn’t right. Once in recovery, a nurse came along and explained that she’d called my partner as the doctor wanted to speak to both of us. At this point, I knew that they’d found something and I was seriously panicking. My partner wasn’t allowed in with me, so he’d driven home with Penelope. I then waited 30 minutes for him to drive back to the hospital.

I was then taken to a side room where my partner and Penelope were waiting. The doctor told me to sit down but I didn’t want to, I just wanted to pace around the room. The doctor told me they’d found a ‘large suspected malignant lesion’. The rest was just a blur. I can only describe it as an out of body experience, where you feel like you’re listening to someone else’s conversation. I didn’t cry or anything, I just felt numb.

My partner drove us home and it was pouring down with rain but the world had never looked so beautiful. I kept thinking I didn’t want to die. I had too much to live for, I was only 37 and I’d just had a baby.

I didn’t sleep a wink that night and my partner booked an emergency day off work, as there was no way I could function. Emotionally I was a mess, all I could think about was the fact I potentially had cancer.

A colorectal nurse called me that morning and explained I’d be booked in for a CT scan and MRI to see if it had spread. So at this stage, I knew the likelihood is that I have bowel cancer but I just didn’t know how bad it was.

I was booked in for a MRI and CT scan that evening. The speed at which everything was now happening was frightening me, I was convinced I was being fast tracked because the doctors thought I was dying.

The waiting for the results was absolutely horrendous. There were moments where I’d forget for a second and then I would remember and the panic would start rising up from my stomach.

A few days later, my colorectal nurse called me and told me that the scans had showed no spread and the biopsies were benign. I was now told we were looking at a ‘very nasty and large 8cm polyp’ and they were going to try and remove it during another colonoscopy. I felt so relieved and had a large glass of wine to celebrate. However, the celebration was short lived, I had the colonoscopy and it was aborted almost immediately as the doctor said he was 99.9% sure it was cancerous and he didn’t want to remove it. He took more ‘aggressive’ biopsies which meant a further wait for the results.

At this stage I knew I had to tell my family, I’d only told my brother, as I didn’t want to worry everyone. We’d already gone through so much trauma as a family. This was absolutely the last thing they needed right now. How could I tell my dad that I had bowel cancer too, he’d only just lost his wife of 42 years. I felt so guilty that I was putting him through this again. It was like history repeating itself, it felt so unfair, and I felt so angry that this was happening to us again. But I felt relieved once everyone knew, as I knew we’d all come together and fight this.

The next few weeks were an emotional rollercoaster. The tumour was 6cm from my anal verge so there was a possibility I’d need a permanent stoma. There was also talk of me having radiotherapy and chemotherapy before surgery to reduce the size of the tumour. This would mean I’d become infertile. I spoke to my consultant about egg harvesting, as I wanted more children in the future. She told me very bluntly that there wasn’t any point in having more children if I wasn’t around to enjoy them. This shocked me, but I appreciated her honesty. I think it was then that I realised how serious this was. My consultant got a second opinion from The Royal Marsden and they thought the tumour could be removed with clear margins without the need for chemotherapy or radiotherapy first. I was then booked in for an ultra low anterior resection with a temporary ileostomy the following week.

COVID-19 meant no visitors and although I missed Penelope and my partner terribly I was glad they couldn’t see me, as I was in so much pain.

The histology results showed no spread to the lymph nodes and the tumour was actually only 1.5cm - there was shadowing on the scans that made it appear bigger. My final staging was T1 M0 NO. This meant no more treatment or mop op chemotherapy, just regular scans and a stoma reversal later on in the year.

Weirdly my symptoms disappeared once I gave birth, and the surgeon said it was the pressure of the baby that was causing the bleeding - so Penelope literally saved my life. We now call her Dame Penelope!

Weirdly my symptoms disappeared once I gave birth, and the surgeon said it was the pressure of the baby that was causing the bleeding - so Penelope literally saved my life. We now call her Dame Penelope!

Because of my family history I’ve been referred to a genetics team as there’s a possibility I might have Lynch syndrome but I’ll deal with that if and when I get diagnosed.

Bowel cancer has turned my world upside down, but for now I’m going to concentrate on enjoying the rest of my maternity leave, without worrying about cancer or COVID-19. Bring on the summer! 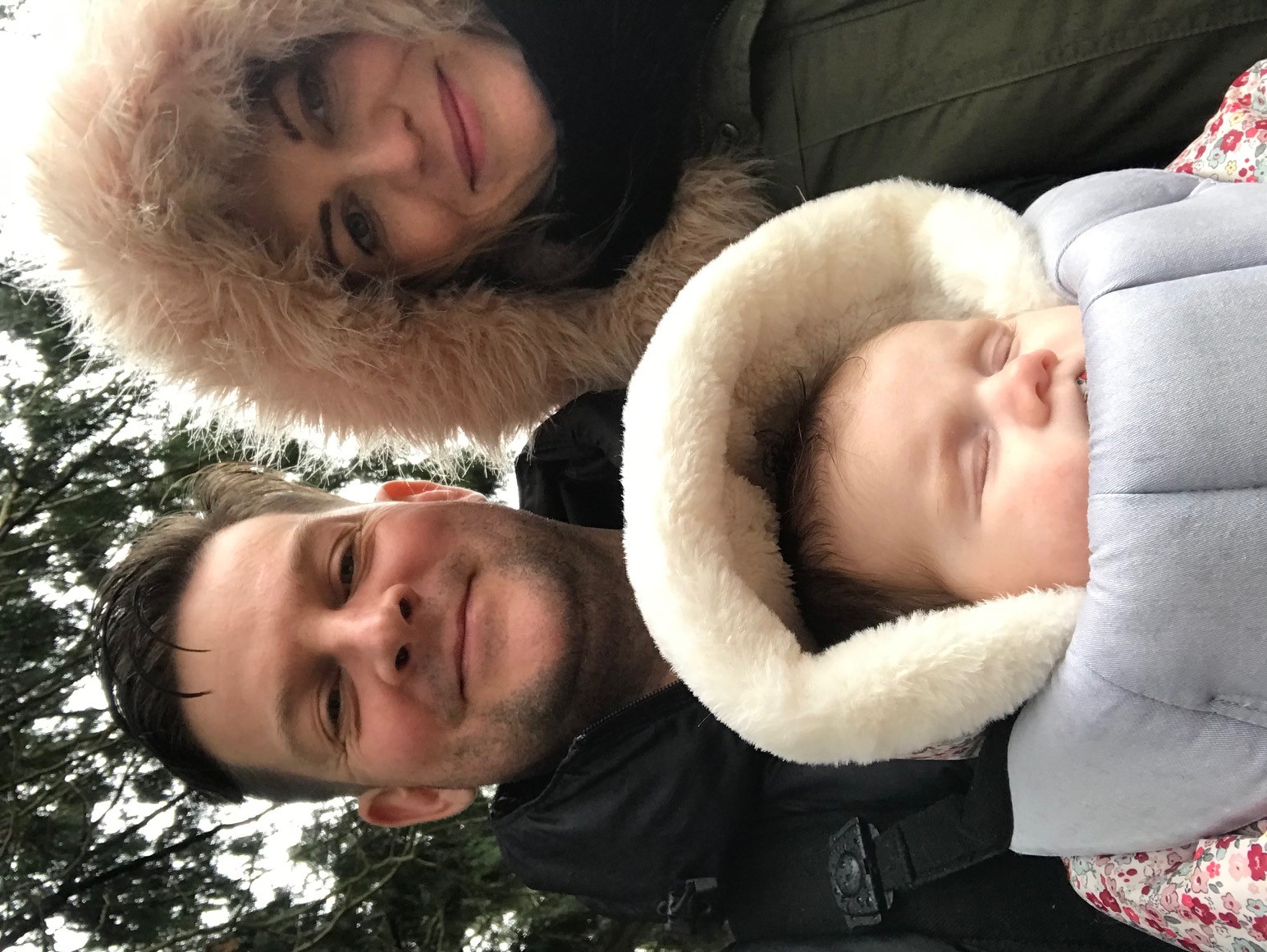 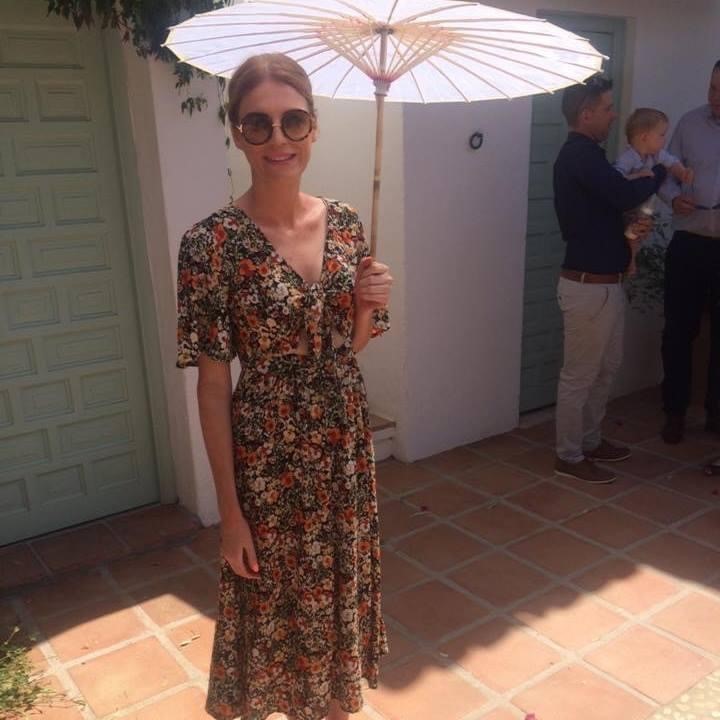 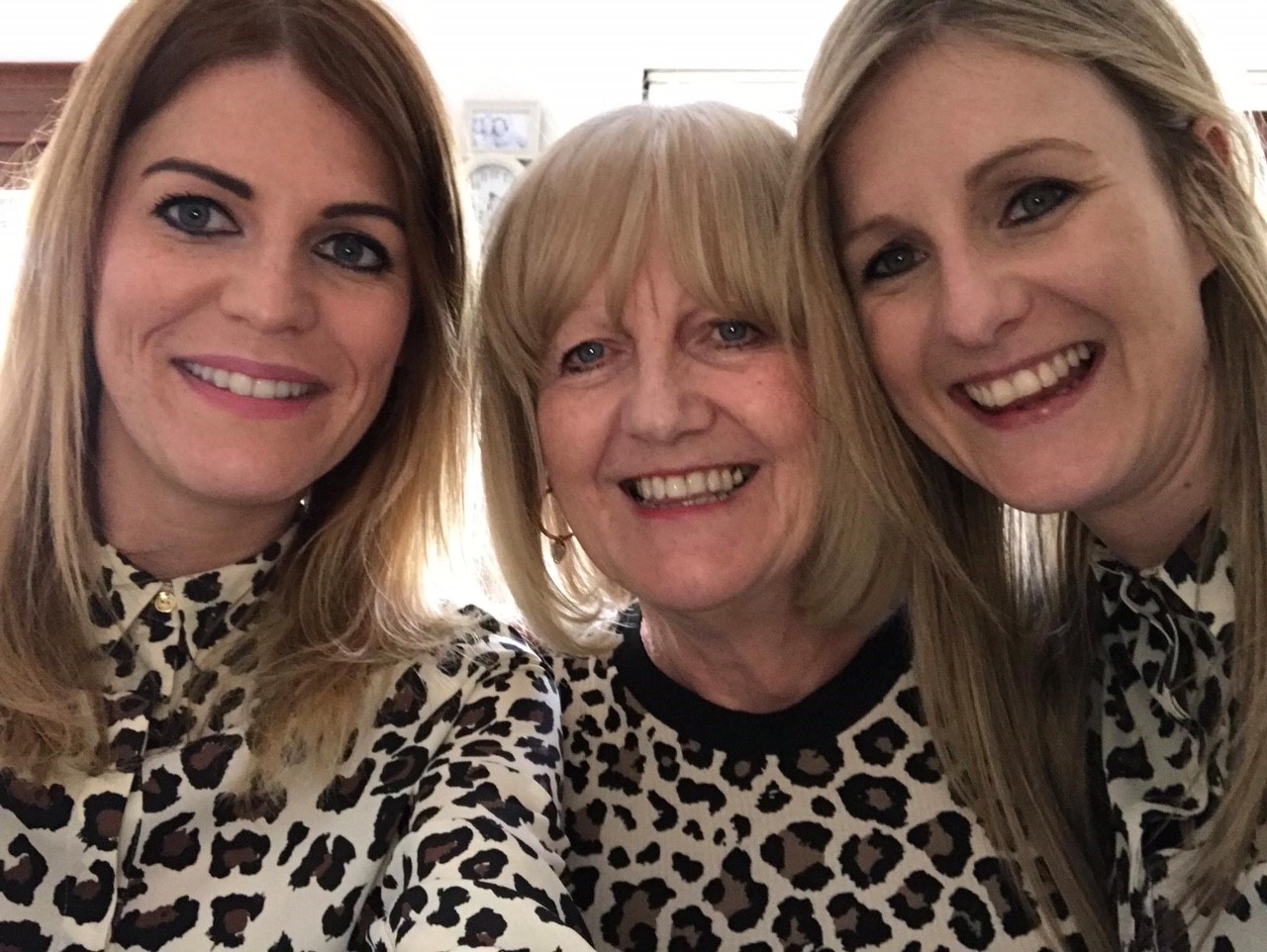 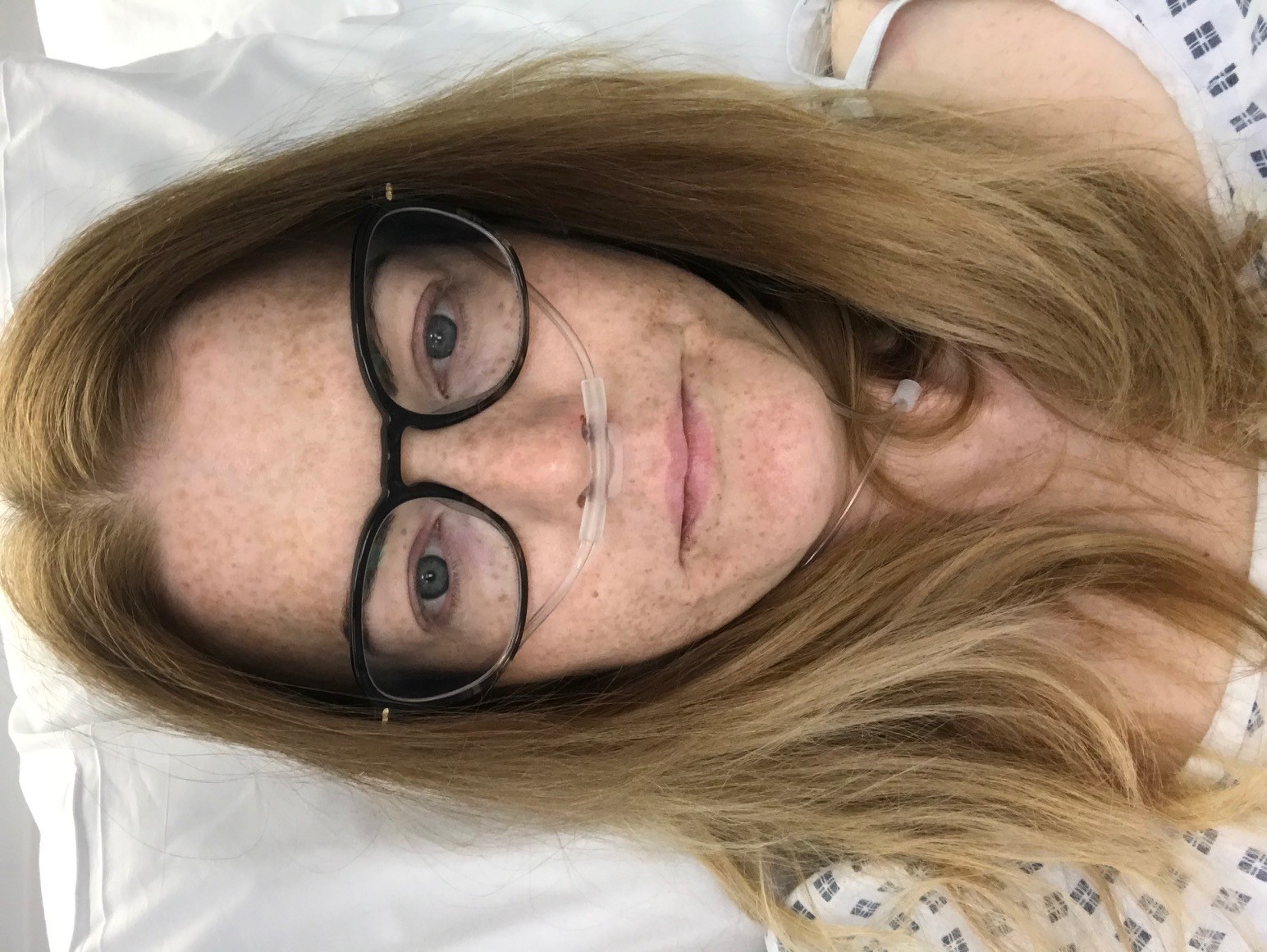 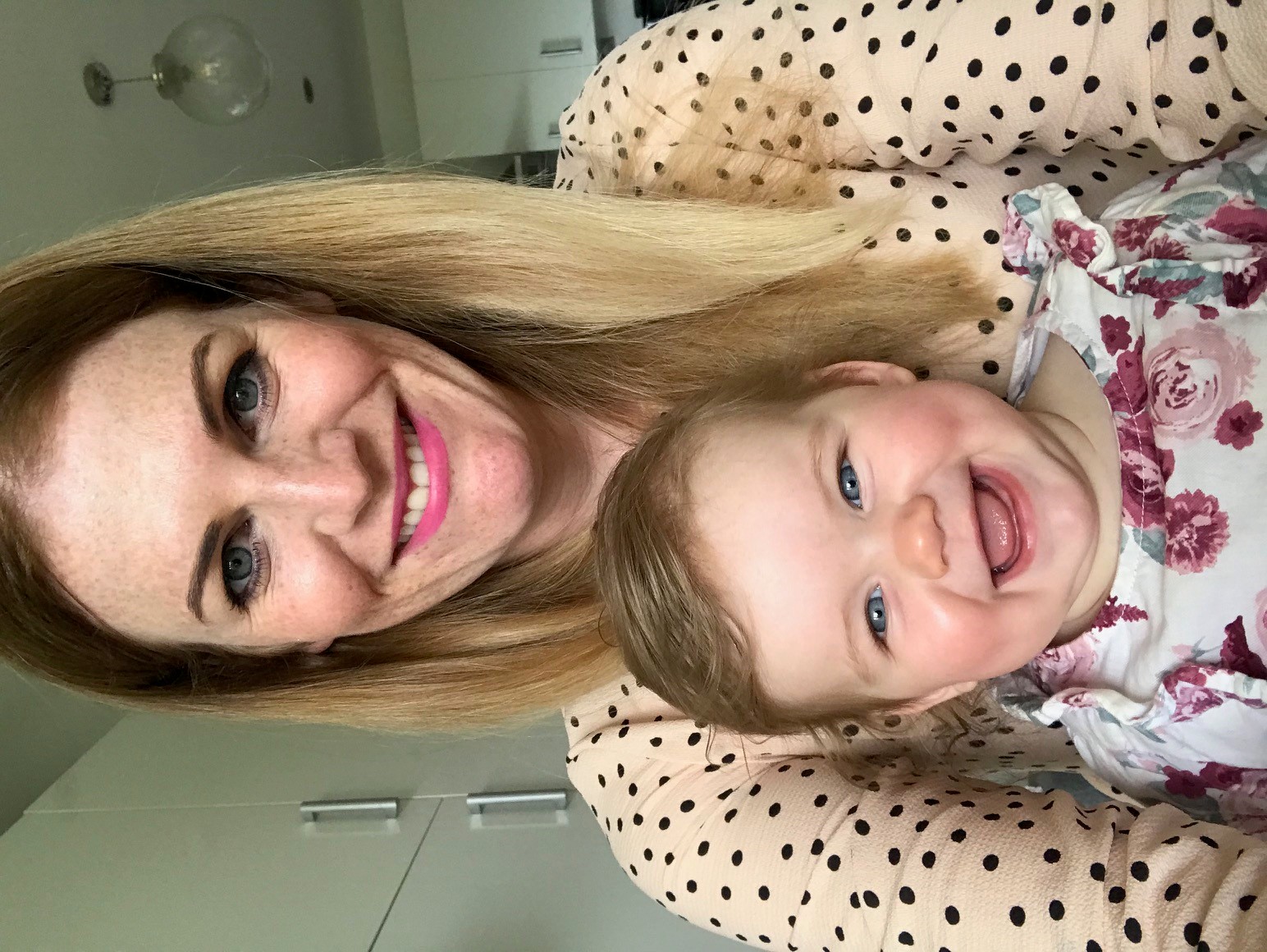