I was diagnosed with stage 4 bowel cancer in November 2020.

Around three years prior to my diagnosis, I didn't feel quite right and the most noticeable symptom was fatigue. I'm fit and healthy, so this was very unusual for me. I must've gone to the GP a few times over the three years, but the tests I had didn't reveal anything. In February 2020, the pain in my tummy was getting worse and I was utterly exhausted. I went back to the GP and they attributed it to the menopause. Although I wasn't totally convinced it was, that seed was planted and I accepted it.

Around two months later we went into lockdown, my youngest daughter was nine at the time and I was juggling home schooling and work. My symptoms did get worse but I attributed it to dealing with lockdown.

By September the pains in my tummy were crippling and I noticed a real change in my bowel habit. I phoned the GP and asked to speak to a menopause specialist. I had a telephone consultation and when I described my symptoms, I was advised immediately that it didn't sound like the menopause and I was given further blood tests and this time, a stool sample.

The blood tests came back ok, but the stool sample showed protein that could be synonymous with cancer and I was referred for a colonoscopy. On the day before the procedure, the consultant said it was unlikely to be anything of concern but as soon as I woke up from the sedation, I knew something was very wrong. They had discovered a 4cm tumour, and I would need an operation fairly urgently as it was blocking almost all of my bowel. Ten days later, I had a bowel resection. It was successful and I didn't need a stoma, but an MRI scan showed that it had spread to my lymph nodes and both sides of my liver. It meant that I was classed as stage 4 and at that point inoperable.

On New Year's Eve I had my PICC line fitted and then on 4 January I started chemotherapy. The aim was to try and get to a point that the tumours on at least one side would shrink completely, so I could have surgery to remove the tumours on the other side. I've had nine cycles so far, and although I've had a series of scans which are showing progress, it's unclear at this stage if I'm in a position to undergo surgery.

The chemotherapy is tough, and the side effects accumulate which makes it even harder to manage. I'm trying to do as much exercise as I can to help with the fatigue, and I'm having scalp cooling treatment to try and limit the hair loss – this is important for my daughter, I think it'll make it less daunting for her if my physical appearance doesn't change too much. The skin rashes and sores are hard to deal with, however I do see a glimmer of hope that the chemo is doing something. I can put up with it for the greater good.

It was really difficult for the whole family, especially our youngest daughter who is at an age where she understands the severity of having cancer. We reached out to Macmillan on how to approach talking to children about cancer. It really helped us have an age-appropriate conversation with her.

It's hard for my husband and older children too. Our eldest daughter lives in London and because of lockdown she wasn't able to see me as much as she would've wanted. They have all been incredibly brave, supportive and positive. I believe that having a positive attitude is so important, having the belief that we can get through this!

I've not worked since treatment started but they've been so supportive. They've done a charity fitness fundraiser in support of me whilst I've been off, which is really kind of them.

Raising awareness of bowel cancer, especially in younger people, is so important to me. I've since met other people diagnosed with the disease and one of the things that keeps coming up is that symptoms are often dismissed or confused with something else. Cancer doesn't stop for the menopause or for COVID. Education on the symptoms of bowel cancer is so incredibly important as an early diagnosis usually has a very positive outcome. 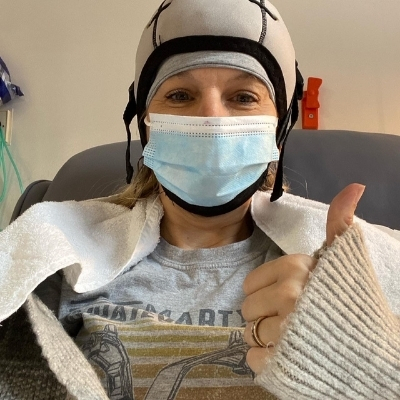 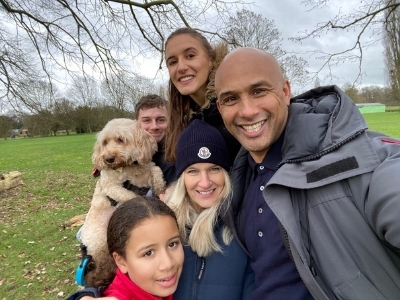 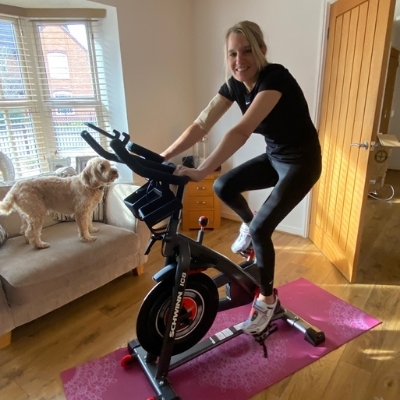