Earlier in the year in March, I started to see mucus in my stool, but not every time. It coincided with me starting a new job, moving house and we'd just had our second child. It was a stressful time.

A few months later in August, I noticed that I was starting to go to the toilet more frequently – around three to six times a day. This wasn't normal for me as I'd always been regular. It was only during a long drive later that month that I developed a haemorrhoid. I was in agony and this prompted me to visit my GP.

At the appointment, the doctor initially suspected mild irritable bowel syndrome (IBS) however I did challenge this. I explained that I knew my body well, and had experienced work related stress in a previous job, and knew that at the time I was very chilled.

As I have a family history of bowel cancer – my grandmother died from the disease and my mum has regular checks – we agreed that I would go away for four weeks and remove from my diet the typical IBS triggers, such as caffeine, wheat etc. If in that time there had been no change he would refer me for a colonoscopy. I also had to provide blood and stool samples, all of which showed no concern or signs of cancer.

I had a colonoscopy on the 17 November at Andover Hospital. Before the procedure the colon specialist told me there was very little for me to be worried about and it was most likely IBS or a mild colon issue.

However they did find a tumour.

I never suspected my symptoms were related to cancer, as I was young, fit and healthy. To put this in perspective, I'm 35 year old, never smoked and run three 10km runs per week, plus regularly go to the gym. I was reassured that cancer in someone my age was very unlikely!

After the diagnosis, it kicked started two weeks of multiple blood tests and CT and MRI scans. On the 30 November I had my first meeting with my bowel surgeon and a specialist bowel nurse at Winchester hospital. They explained that my tumor was at the base of my colon – six inches above my backside, and about 4cm in size. The tumor was tricking my body into thinking I was full, hence needing to go to the toilet more frequently.

He also explained that it had most likely spread to my liver, but that we had caught it at a stage where it was still deemed as treatable and most likely curable. But we had to act fast.

The spot on my liver was on the outside edge, and reacted very well to Folfox (it halved in size) and had not spread any further.

Overall the chemo went really well for me. Throughout my treatment the main side effects were severe nausea and tingling and numbness in my fingers and mouth when exposed to cold temps, and these compounded as I had more rounds of chemo.

However, I managed to get through the nausea with the steroids and anti-sickness tablets I was given, and the sickness would typically only last for the first four to five days after treatment. Plus, I made sure I wore warm gloves if I went outside or into the fridge to avoid the numbness.

The biggest issue I found was making sure that I was physically and mentally ready when going into my treatment rounds. An example of this being, in between my second and third rounds of chemo I decided to get back to my old (pre-cancer) exercise routine, and got back to my running and cycling. This led me to being worn out when I had my third round of chemo, and this physical and mental tiredness meant the chemo hit me really hard. After this I made a real effort to just relax for the five days leading up to my chemo, making sure I only went out walking and looked after myself.

The recovery from my initial bowel surgery was not great as I got sepsis on my sixth day due to an anastomotic leak (gut filled with faeces) from my anterior resection. This led to me having to have an emergency operation and a further 20 days stay in hospital – over Christmas and New Year – as my bowels went into ileus. During this time, I was nil by mouth and lost two stone. However, once discharged and home my recovery started to go very well, and I made sure I got out for a walk every day in order to keep myself active.

The stoma has really not been a problem at all, and of all the issues I've had to deal with it has been by far the least of my worries. Plus after about eight weeks I was pretty much back to my original diet which had no issues. It has not slowed me down at all, and I'm still able to do all the things I did prior to having it in place. The only real issue is that I have to get up in the middle of the night to empty it. The plan is to have it reversed in November 2021 once I have completed my final round of chemo.

For my second surgery, the liver resection, everything went as planned and I was discharged with no issues or complications after three days and my recovery at home went very well.

My life has changed dramatically since being diagnosed with bowel cancer. Apart from having 30cm less colon and a lot less liver, I now feel a real urge to make sure I don't waste a moment of life.

I still have three months of chemotherapy left to go, but my previous scans on my liver tumour was very positive. It showed that the folfox had shrunk the tumour and there was no further growth. I am now waiting for the final CT scan to get a full view of the rest of the body, but feel confident that we have managed to get on top of this in time.

Work have been brilliant and extremely supportive. After five months off work, I've finally returned towards the end of May. I'm really happy to be back and using my brain. Plus, I am getting back to my old self (pre cancer) and trying to getting fit.

Throughout the last five months my wife and I really tried hard to make sure that the cancer has not affected our day-to-day family life, making sure that we stay as normal as possible for our kids. It's not been easy as there have been days when I've needed to take a break or had to ask the kids not to jump on me like a trampoline. I also made sure that I always did the drop off and pick up for school as I wanted to keep the consistency here.

My life has changed dramatically since being diagnosed with bowel cancer. Apart from having 30cm less colon and a lot less liver, I now feel a real urge to make sure I don't waste a moment of life. I'm making sure I spend more time with my family, and not being the man who has days of unused holiday left at the end of the year.

Plus it's really got me thinking about how I am planning for when I am not here (regardless of cancer), and making sure that I leave my family in the most secure position I can. 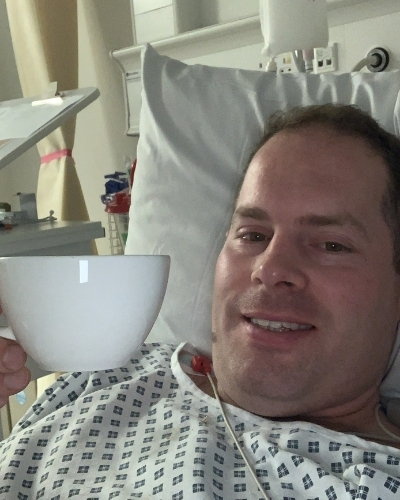 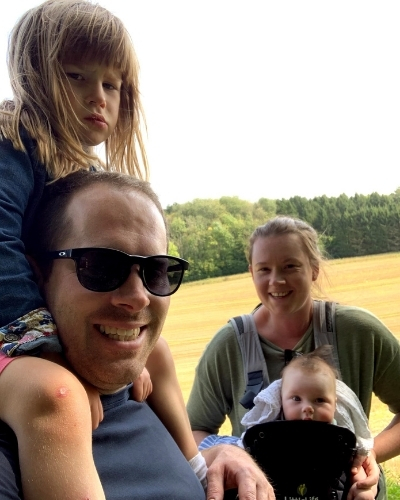 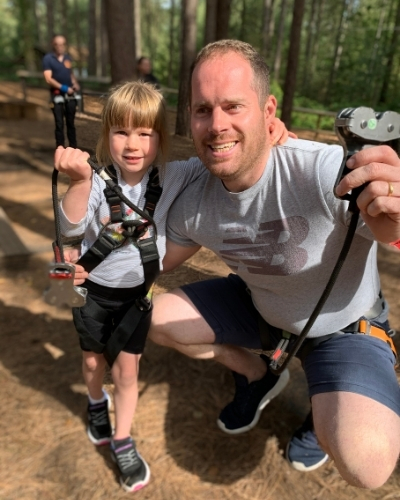