I was diagnosed with stage 3 bowel cancer in September 2020.

In 2018, I noticed that I had a change in my bowel habits and went to see the GP to check if it was anything serious. We have a family history of Lynch syndrome, my 42-year-old sister died of ovarian cancer in November 2018, and my uncle and granddad's brother died from bowel cancer. The genetics team believe the Lynch syndrome gene is from my dad's side of the family.

However, I was told that I didn't have cancer as I was too young, fit and healthy.

Two years later in August 2020, I was experiencing severe stomach cramps. I phoned the GP and they thought it was constipation and suggested I take a laxative. This didn't have any effect and a few days later I was in so much pain that I went to the local walk-in centre at 5am. They thought it was a stomach virus and said I should take an over the counter tablet to ease cramps. It did ease off slightly but I went back to the GP. They weren't too worried but because I have a family history, he sent me a stool kit in the post. After the stool sample came back as raised levels (score of 77) the hospital referral team asked for my bloods to be taken.

The blood test revealed something worrying and I was booked in to have a colonoscopy four days later.

During the procedure I could see that the tumour completely blocked my bowel. The endoscopist said he didn't know how I was eating solid foods. A few days later I had a CT scan, and then I saw the consultant and explained they thought it was cancer, but they'd taken a biopsy and were waiting for the results.

My operation was booked in for 9 October and explained that I needed to be on a liquid diet until then. I was in so much pain as I couldn't pass anything and on the 30 September I went to A&E. I started being sick and the following day I had emergency surgery.

They removed all of my large bowel and very astonishingly, I didn't need a stoma. I was hoping to get away with it anyway, so I was very relieved.

I had a good recovery and was home on the 8 October. I spoke to my oncologist who said I needed to have six months of chemotherapy (FOLFOX), which I started in December. It was really tough, made harder as I didn't have my large bowel. I lost three stone. I went to toilet up to eight times a day and was exhausted for most of the time.

The oxaliplatin has had a severe effect on my nerve endings, I'm an electrician and having feelings in my fingers will have a huge effect on my trade.

My wife is doing an amazing job of looking after me, and our four year old and eight month old. My younger sister is an ovarian cancer researcher, she knows about immunotherapy and there was a clinical trial available, however this paused due to COVID-19. I spoke to my oncologist about it and he wouldn't have recommended the clinical trial anyway, but did think immunotherapy would work. It's not available on the NHS for people with stage 3, so I'm raising £16,000 to have a few sessions. My oncologist doesn't believe I need more than that.

With the support of my family and friends, I'm very close to the target so I'm in the process of booking the treatment now. 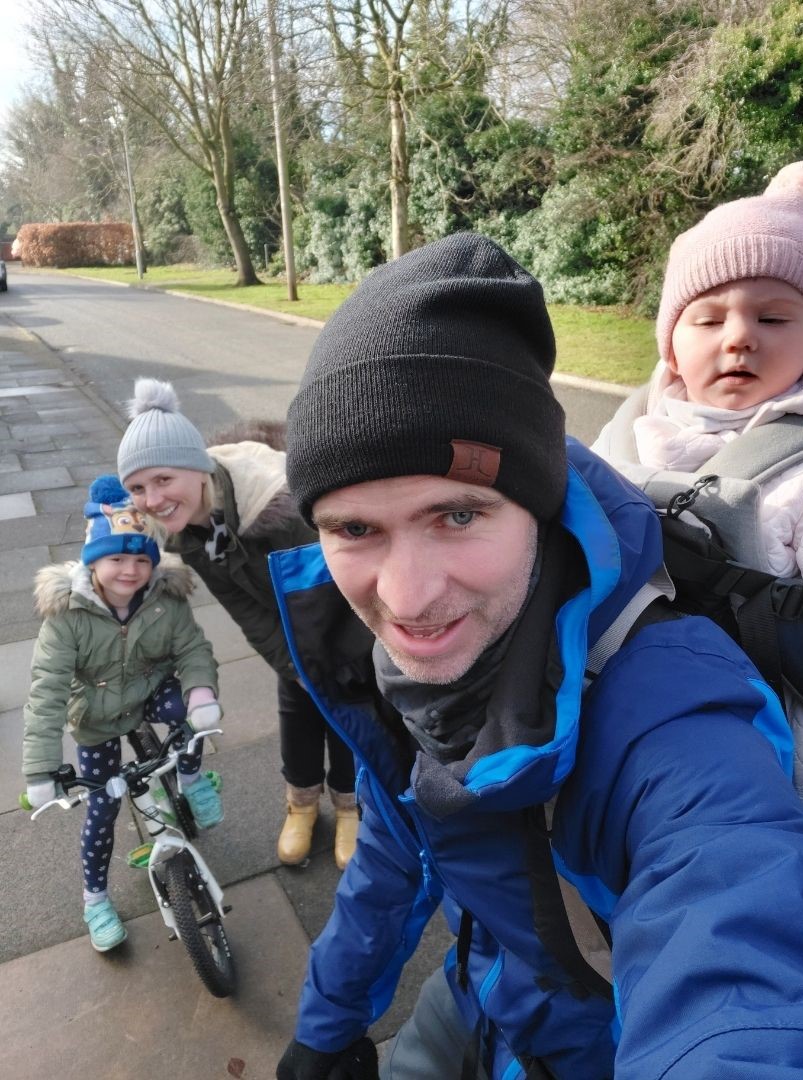