I was diagnosed with stage 3 bowel cancer in November 2017.

My experience of bowel cancer all began with stomach problems I experienced around five or six years ago. My sister and my niece both have coeliac disease and I thought I might have the same condition.

At the time my symptoms didn’t interfere too much with my day-to-day life, but I did have a lot stomach pain, cramping, constipation and occasional bleeding.

My experience at the GP wasn’t the best and I recall my doctor reeling off a list of possible conditions. My doctor was resistant about referring me and it was only because I was adamant and pushed, that I was able to get tests done.

I had two colonoscopies and the hospital found a very small polyp which was removed and tattooed. The hospital then booked me in for a procedure to have an area of my bowel removed.

However during that planned operation in June 2015, the hospital discovered there were no more cancerous cells present and decided not to operate in order to preserve my way of life, considering my young age.

In August 2017, the severe stomach pains once again returned. I recall I was working on a contract project, staying away from home in hotels and being in a lot of pain and discomfort most nights.

I had two colonoscopies in quick succession, the second revealing I now had a suspicious flat polyp. My consultant (who had decided to do his own colonoscopy on me) discussed all possible scenarios which included the worst, that being cancer.

I made the decision there and then to go private as the wait on the NHS was over three months - I was not prepared to put my life at any further risk and wait. I checked into a private hospital for a bowel resection on 1 December 2017. As part of this procedure I had to have a temporary stoma in order to allow my resection to heal. I also had numerous lymph nodes removed.

In January 2018, my consultant confirmed the cells removed were in fact cancerous as were some of the lymph nodes that were removed. As a precaution I was booked in for chemotherapy treatment which lasted for 12 weeks up until the end of March. I decided to keep working as best I could throughout the treatment in a way of keeping things as normal as possible and to keep my mind off the situation, luckily working in IT, I can work remotely. Both my employer and client at that time were very understanding and encouraged me to do so, as and when I could.

I found I could work as normal most of the time, however around two days after each intravenous chemotherapy treatment I would deteriorate and needed to rest for a few days, minimizing my time off work. This was a personal choice as my employer was fully supportive of me taking time off on full pay despite not being contractually obliged to do so.

Since my diagnosis my family have all been incredibly supportive. I could not have got through the chemotherapy without the support of my partner, mother and two sisters. My sisters allowed me to stay with them, and cared for me immediately after each of my intravenous chemotherapy as this is when I would be at my worst. This lasted for approximately four days each round of IV treatment, after which I returned home to my young family.

They’ve been a great source of comfort for me as there were times when the chemo treatment was tough, making me feel agitated and causing me to suffer mood swings, loss of interest in all life had to offer, along with my appetite.

Post my treatment, the effects on my mental health started to develop. There were times when I felt very anxious for my future (would I be here for my children?) and my health, so much so that I decided to seek professional counselling which has made a huge positive improvement.

Since my diagnosis my life has changed a great deal. Before I used to be very career-orientated and often worked away from home for a number of nights most weeks. Now, I am very lucky to have a home based role allowing me to be there and spend much more time with my children.

I now see my consultant every three months for blood tests, scans and check-ups. I made the decision to do this privately as you cannot put a price on your life.

The advice I would give to someone my age, who might be experiencing the same symptoms I did, is that you are never too young. Listen to your body, see your GP immediately and keep pushing until you get tests that satisfy your concerns. 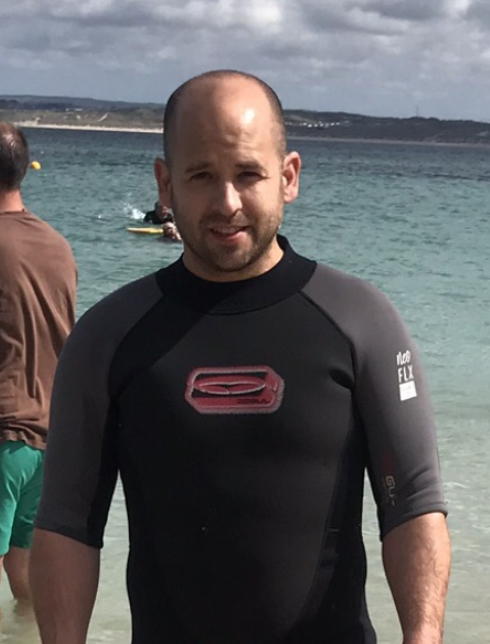