The year 2020 for my family started off badly, even without Covid-19. My dad was poorly with a life threatening blood clot on the heart and followed by an infection in his metal knee that just wouldn't shift. He nearly died twice, and in the middle of this, I was preparing to move house, with the usual stress of an unhelpful solicitor. Essentially, I was stressed, with long commutes to work each day I was also physically and emotionally exhausted, and it was only February.

All of these factors contributed to what I assumed was Irritable Bowel Syndrome as I noticed pains in my lower abdomen. I had recently been put on a new contraceptive pill and thought it was related to ‘women’s problems’ – how wrong can a girl be? I went to my parents in Devon the weekend before lockdown hit. The cramps that weekend were prominent, it was almost like a mini-labour – the most intense pain, it stopped me in my tracks, I coiled over in pain and it lasted for minutes. My mum saw me having an attack of the cramps and wanted to rush me to A&E but I hadn’t spoken to my GP and if I’m honest, I thought I might be over exaggerating the issue. I had recently gone back to the gym, and was getting a little obsessed again with the rowing machine so I thought maybe I had done something there.

I rang my GP for the first time the next day – I knew I was going to be nagged to death otherwise. I explained my symptoms and I was told it was likely severe constipation and I was put on a heavy dose of laxatives, starting off at eight a day and then to slowly wean myself down to none over the course of weeks/ months to kick my digestive system in to place.

To be fair, the laxatives did work in terms of the pain stopping – but as soon as I had weaned myself off over the course of about six weeks, the pain returned (and quickly). I rang my GP a couple more times over the next few months and was told that I had a lazy bowel, that I could be on laxatives for life, it was nothing to worry about and weirdly that I ‘definitely did not have cancer’ – a factor I hadn’t even considered. Eventually in July the pain became excruciating so I rang 111 and they told me to go to A&E, which kicked off my journey.

At A&E, I was seen and sent to a surgeon’s ward, where the surgeons examined my abdomen and they said that I likely had adhesions, a twisted bowel or a blockage. I was therefore being recommended for a colonoscopy and released to go home that night – the appointment for the colonoscopy came through quickly for July, which was brilliant.

What I saw on the screen during the colonoscopy was a nice healthy looking pink/ peachy flesh of the intestinal wall, until they turned a corner and a mass of blood red gristle was shown to almost entirely block the cameras path. I remember the surgeon saying ‘that’s cancer’, he said he would take over to end the procedure and talk to me after. Having to tell your parents you have cancer should have been hard, but I was in shock and still under light sedation so blurted it out to my mum.

A week or so after the diagnosis, I had to go for a CT scan to see if the cancer had spread, but thankfully the cancer was contained to the bowel, and there was no spread to any wider organs. I had keyhole surgery to remove most of my large intestine and some of my small intestine. Luckily, I didn’t have to have a stoma bag.

During the surgery, the surgeon removed 44 lymph nodes, of which one had shown signs of cancerous cells. Therefore, the surgeon recommended that I have chemotherapy to increase the chances of my survival long term. I had six months of chemo (Oxalyplatin and Capecitabine) and I’m currently awaiting appointments for my annual review.

I found the information on Bowel Cancer UK’s website about diagnosis, operation and treatment to be really useful. I have also created a blog about my specific type of chemotherapy regime as I didn’t find much information on the internet that could help me plan ahead for that type of treatment.

My life has gotten way slower since my diagnosis. Whilst everyone else was having a change of pace from the pandemic, mine was driven by the cancer. I work from home, I need to nap most days. I have residual pains from the chemotherapy in my hands and feet which is being treated through physios (MacMillan are brilliant) and painkillers. I would also like to think my life has become richer, I try to do more now, catching up with friends post lockdown and my godchildren, I suppose it has reignited that the simpler things in life that make you happy are what makes life blessed.

I hope the cancer is gone for good, but I suppose in the meantime it’s good to enjoy what time I have. I got a puppy two weeks after chemo finished, and I am so busy bringing up the little nipper, she makes me look to the future with a smile and not burden myself so much with what’s coming next with my cancer appointments. 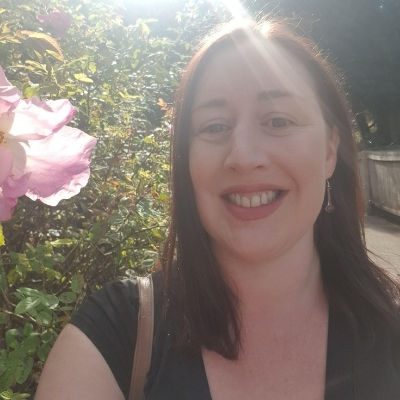 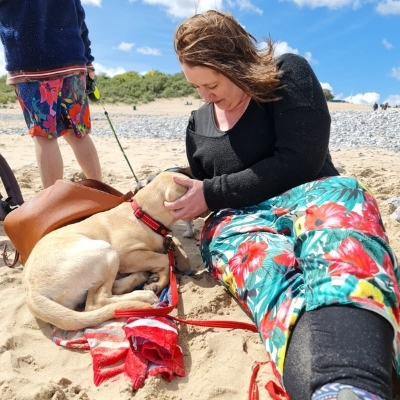