On Valentine's Day in 2020, my sister phoned me to say she had been diagnosed with bowel cancer after taking part in the screening test. I was incredibly shocked, she was very healthy and hadn't even been to the GP for 12 years. Shortly after my screening test came in the post and I completed it straight away.

I received a letter in the post with an appointment for further tests. At the consultation with the medical team I was a bit of upset and explained that my sister's cancer had spread to her pancreas and kidney. I went home with an appointment for a colonoscopy, however we went into lockdown so the procedure was cancelled and I had to wait until June. When it was finally time, I had to go to the hospital on my own whilst my husband waited in the car due to COVID precautions. After they had finished the colonoscopy they invited my husband to join me. I knew that wasn't a good sign. They explained to us that they had found a tumour, which they believe was cancerous. We were both so stunned. I had a CT scan straight away and one of the nurses phoned me the next day asking if I was ok. I was so anxious that it would spread like my sister's but luckily I was diagnosed at stage 2.

I didn't really know what this meant so I rang my GP, who I've known for 23 years, and he confirmed that it was very treatable. I felt a bit better after that. My surgery was booked in at the Princess Grace Hospital, it was a private one, and on the day of the operation I was speaking to the medical team, however the surgeon wasn't happy to perform the operation due to other health conditions, and wanted to do it at University College London Hospital with his full medical team.

After that I had terrible anxiety. I was scared that whilst I was waiting for treatment the disease would spread. A week later the medical team phoned again and suggested that I could have surgery, or instead have chemo-radiotherapy. I discussed it with my family and we decided to have chemo-radiotherapy first. By this time, my sister had just finished chemotherapy but sadly it hadn't worked.

Early September, I started five weeks of treatment, I was on chemotherapy tablets and went in every day (Monday to Friday) to have daily radiotherapy sessions. My husband took time off work to drive me as I was shielding and had to avoid public transport.

I didn't find the treatment too bad, but some of the side effects like reduced appetite and tiredness could have been attributed to my anxiety.

I had a scan in January, and the night before I got the results my sister died. It was heart breaking and I didn't know if my treatment had worked. Fortunately ten days before, we went to see her. On the 13 January, I had my appointment with the oncologist and the treatment had worked – there was no evidence of any cancer. I didn't even need surgery. In the meantime, my youngest daughter was diagnosed with diverticulitis.

The funeral for my sister was late February, and I don't know how but I managed to say a few words during the service.

Having cancer during a lockdown has taken a toll on my mental health. My anxiety is through the roof, I just want to get back to feeling myself again, but I can't get thoughts of the cancer returning out of my head – it's always in the back of my mind. I'm on medication and going private for therapy. It's probably too early to tell if it's working or not. It's so difficult shielding, not seeing family or friends during this very difficult time. 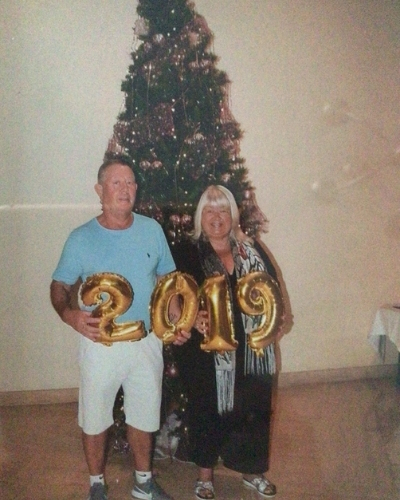