In 2018 I was experiencing anemia, which was detected when I went to give blood. I went to my GP many times, had tablets and infusions and was referred for a colonoscopy, nothing was detected and the doctor thought it was irritable bowel syndrome (IBS), therefore the treatment for anemia continued. I later found out it was a trainee that carried out the procedure.

I didn’t think it was IBS so I paid privately to see a gastroenterologist, which detected a hernia but nothing else.

In January 2020, the day before my birthday, I went to A&E as I was in such extreme pain. I waited a good few hours just to be told it was IBS and they sent me home with paracetamol.

My symptoms worsened during February with extreme pain and vomiting so we called my GP on 8 March, an ambulance was called and I was taken to Addenbrooke's Hospital in Cambridge, where I was diagnosed with a blockage and had emergency surgery the next day.

I didn’t think for one minute it would be cancer. I found out 10 days after and then had to wait for histology report to confirm which took another two weeks. One lymph node was affected, which meant I needed to start chemotherapy.

Recovery from the operation was hard, and then I got an infection during lockdown which was not very nice.

Once I recovered from surgery, I started chemotherapy. However, I had an anaphylactic reaction to the Oxaliplatin, and also suffered from extreme vomiting, it was the most awful experience of my life and still affects me now. I had to stay the night in hospital for them to keep an eye on me.

A few weeks later I started Capecitabine for six months. I still had side effects but they weren’t as bad as the previous chemotherapy drug. They include: extreme fatigue, cracking feet, ear pressure, some hair loss (thinning) and sickness. It was really tough. However, I’ve now finished treatment and I got the all clear on Monday, I was so relieved.

I have two children at university, they were home during lockdown so it helped me enormously. My family have been so supportive, but hard for them to see me going through the diagnosis. Now that treatment is over I’m looking forward to getting my life back, going back to work and getting some normality back in these strange times. 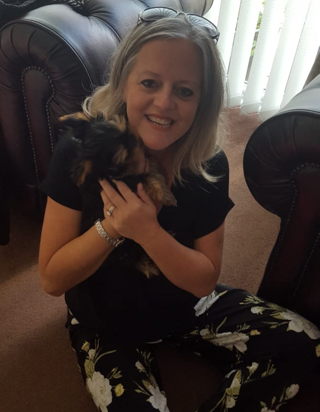